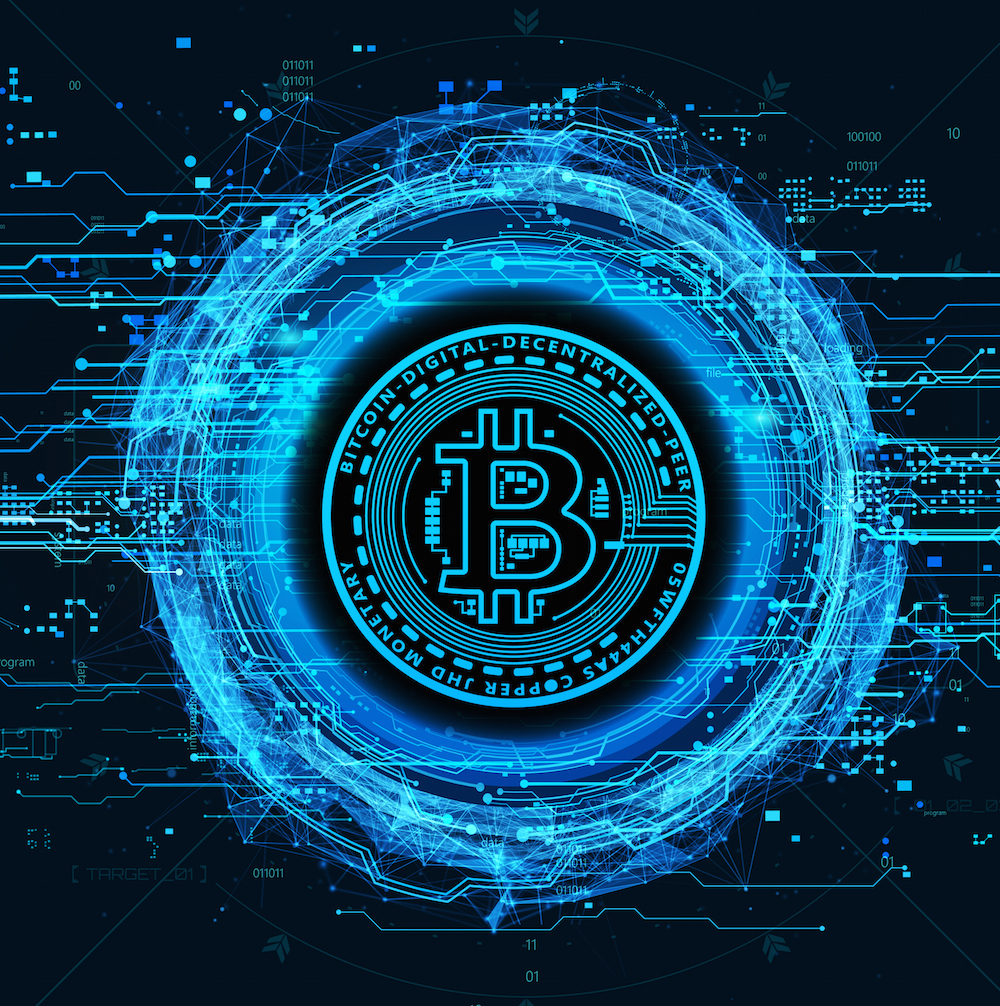 EEJournal readers ought to be very familiar with Bitcoin by now. All of the computing fruits of semiconductor technology, including microprocessors, GPUs, FPGAs, and ultimately ASICs, have been harnessed in the frenzied search for solutions to a mathematical problem that serves as “proof of work” that entitles the bearer to Bitcoin, using the rules originally created by the pseudonymous Satoshi Nakamoto and published in a paper titled, “Bitcoin: A Peer-to-Peer Electronic Cash System” a decade ago.

Nakamoto’s paper gave the concept of cryptocurrency to the world. It also introduced the idea of the blockchain, a distributed, secure-by-design ledgering system tailor-made for a world populated by millions of servers interconnected by the Internet. Bitcoin may or may not survive, but blockchain-based ledger systems are already well established. Note well: Bitcoin and blockchain are not the same thing, even though both have been overhyped. If you’re confused with this, you need to read more on crypto news now to understand better.

That was one of the underlying messages delivered by IBM Fellow Dr. C. Mohan during his tutorial at Hot Chips 30. Mohan started by saying that there was too much hoopla in the blockchain space. Particularly that part about solving world hunger. Oh, and that meme driving Bitcoin about how there are no government entities or banks controlling Bitcoin? Just what do you think Bitcoin exchanges are? “There’s no chance in hell” that one currency, crypto or real, will be adopted worldwide. (See the Wikipedia entry for “Esperanto.”)

“Ah, but blockchain—now that’s a technology that can be used to solve real-world problems,” said Mohan, who is interested in private uses for blockchain technology. However, there are a few challenges in the way.

“First,” said Mohan, “there are no blockchain standards, so the world surrounding blockchain’s use is somewhat chaotic at the moment.” Mohan described blockchain technology as being where relational database technology was 40 years ago. It’s in the early phase of commercial development. One effort to develop some standardization for open-source blockchain technology is Hyperledger, a Linux Foundation project with more than 250 members already signed up.

What can you use blockchain for? Mohan suggests that it can be used to manage any real resource whether you’re talking about diamonds, spare parts, pharmaceuticals, food, etc. Blockchain is useful whenever many different business organizations are involved in the workflow for the resources, and transportation/logistics is definitely included in the workflow. Even though it’s still early days, blockchain services are now being offered by name-brand vendors, including IBM, Oracle, and Huawei. These companies and more to come are offering blockchain as a service (Baas).

There’s a significant difference between public uses for blockchain (think Bitcoin and Etherium) and private uses. When public use is involved, anyone can access the blockchain ledger and will see every transaction on the network. That’s supposed to be part of the attraction for these crypto-currencies. There’s a downside too. Because these public uses are based on public/private crypto-key technology, if you lose your private key, you lose access to all of your crypto-currency. It’s an anonymous network, so no one can get your key back for you. Imagine running your bank account that way. If you plan to invest in crypto, you might want to know what is hodl in stocks?.

A blockchain ledger is nothing more than a historical record of all transactions related to a resource. Take diamonds for example. A diamond is mined, sorted, cut, polished, boxed, mounted in a setting, sold, and resold. There are transportation events taking place between many of these events. Diamonds are valuable enough and unique enough to track. In a private blockchain network for tracking diamonds, every party in the network will have the same blockchain ledger that accounts for the diamonds at each stage.

Another example is food. Whether it’s beef or leaf lettuce, there have been food scares and recalls. Instead of mass recalls, a blockchain ledger system to track beef or vegetables from grower to processor, to distributor, to retailer, to restaurant or end customer would allow targeted recalls to occur quickly. Blockchain technology would also permit investigators to determine why the food was spoiled. For example, did the truck carrying the food from one point to another maintain the food at the proper temperature during the entire trip? A blockchain ledger system creates a master database that can be readily queried to access that sort of information. It’s one short hop from this blockchain scenario to one where the blockchain ledger is partially or fully informed by a swarm of IoT devices distributed worldwide.

Now, consider container shipping. Someone, somewhere fills a container with metals, sliced granite, toys, car parts, tools, or electronics. The container then goes on a truck to a port where it’s loaded onto a ship, sent to some intermediate port where it might be loaded onto another ship, and then sent to a final destination port where the container is unloaded, stacked for a while, loaded onto a truck, sent on to its final destination, and finally unloaded. There’s a lot of tracking involved in these operations conducted by multiple entities, and, consequently, there’s plenty of opportunity for shrinkage, damage, spillage, or spoilage. This is precisely the reason that cargo carrier Pacific International Lines (PIL), terminal operator PSA International (PSA, based in Singapore), and IBM recently conducted a pilot exercise based on IBM’s Blockchain Platform—to investigate how such a system might perform even at this early stage in blockchain’s development.

Here’s a McKinsey graph of all the commercial, business, and government sectors that will be affected by blockchain, taken from one of Mohan’s slides: 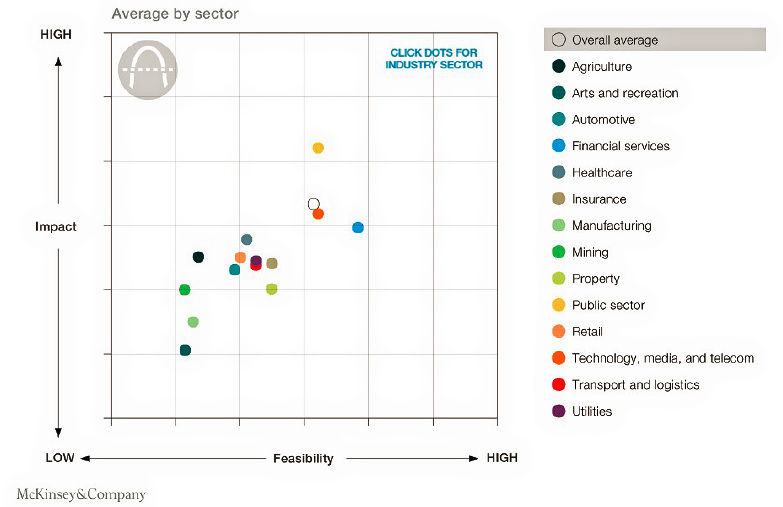 Based on this graph, the effects will be pervasive.

Finally, blockchain ledgering simply doesn’t work without the cloud and, in IBM’s case, it runs on a mainframe. (“Yes,” said Mohan, “mainframes are still viable.”) According to Mohan, mainframe computers provide the highest level of security for blockchain transactions.

At the other end of the scale, IBM has developed something it calls the “Crypto Anchor Verifier.” (Yet another reminder of why we don’t let engineers do marketing.) The Crypto Anchor Verifier uses a special lens attached to a mobile phone to capture microscopic details of an object’s surface, including optical characteristics such as shape, viscosity, saturation value, and spectral values. These images go into the blockchain ledger with everything else and can be used to verify that the object that went into a container is the same object that came out of the container. Now there’s a technology that’s ripe for development. I’m calling dibs on the phrase “Blockchain Tricorder.”

Mohan prefers private blockchain networks because the chances of someone misbehaving in such a network is much less than for the public networks that deal with crypto-currency. Considering its reach, it’s highly unlikely that something you’re doing won’t be touched by blockchain technology. It solves multi-user database problems that Mohan has been trying to solve for decades, which explains why he now evangelizes the technology and why he’s posted an extensive page of blockchain resources including papers, articles, and videos on Facebook. Click here to see it.