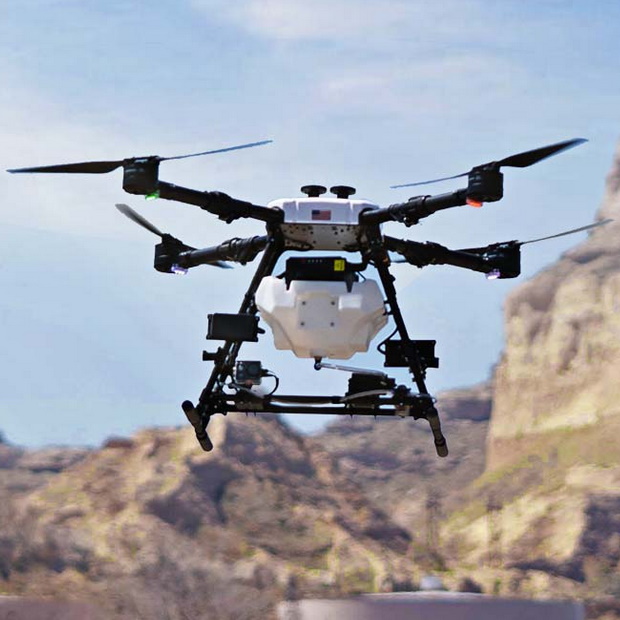 Are Agricultural Drones Poised to be the Next Big Thing?

The latest research indicates that Homo sapiens—the species to which you, your humble narrator, and all other living human beings on this planet belong (even the French)—first made its appearance sometime around 300,000 years ago (possibly on a Wednesday morning, but don’t hold me to that).

It took most of the past 300,000 years for our population to reach 1 billion people, a milestone the United Nations (UN) organization estimates occurred in 1804. It took only 123 years after that before the population doubled to 2 billion souls in 1927, and just 33 more years to reach 3 billion in 1960.

Things have been racing along since that time. It’s a scary thought that, according to the UN, the global population pipped eight billion in November 2022. I was just looking at the real-time World Population Clock. Watching the ever-changing values for births and deaths really gives one pause for thought.

I’m currently in the process of reading Homo Deus: A Brief History of Tomorrow by Yuval Noah Harari (I totally recommend his earlier tome, Sapiens: A Brief History of Humankind). While Yuval agrees that there are a lot of people going hungry around the globe, he believes this is primarily due to mismanagement of the world’s resources.

It’s hard to disagree with Yuval on this. According to World Population Review, the top three countries wasting food in 2022 were China (91 million tons), India (68 million tons), and America (19 million tons). Furthermore, Feeding America notes that 40% of all food in America is wasted, which equates to 130 billion meals (and that’s American-sized portions—we’re probably talking two to four times the number of meals if they were served anywhere else in the world).

I remember when I was a kid and we went to the greengrocers, my mom took what was on offer and we didn’t worry if the produce had little blemishes or unusual shapes. By comparison, one of the problems in places like America these days is that we want things like our fruit to look perfect. For example, we like our apples to be perfectly shaped, sized, colored, and without blemish. We don’t know how lucky we are to be able to be so finicky.

There’s also the argument about meat versus plants. According to OurWorldInData.org, it takes almost 100 times as much land to produce a gram of protein from beef or lamb, versus peas or tofu. This same article notes that, “If everyone shifted to a plant-based diet, we would reduce global land use for agriculture by 75%.” There’s also the fact that, as noted by UC Davis, “Cattle are the No. 1 agricultural source of greenhouse gases worldwide.” I have to admit that I love a beefburger as much as the next Homo sapien, but I think it’s time to do my part and start cutting down.

In addition to reducing waste of the food itself, something else we can do is be more judicious in our use of things like fertilizers and pesticides (including insecticides). Also, while today’s agriculture is amazing in terms of efficiency and productivity, as compared to the past, there’s always room for improvement.

Speaking of agricultural drones (we weren’t, but we are now), I was recently introduced to a jolly interesting chap called Arthur Erickson and his company called Hylio.

The story behind Hylio is rather cool. In 2015, Arthur and his two roommates at the University of Texas in Austin were getting ready to graduate. Arthur was a student of Aerospace Engineering, Mike Oda was a student of Business and Finance, and Nikhil Dixit was a double major in Electrical Engineering and Computer Science.

The three friends were watching a television program about Amazon’s plans to use drones to make deliveries. Realizing that the use of commercial- and industrial-grade drones was a wide-open field (no pun intended), and having the requisite skills between them, they decided to form their own company to supply agricultural drones with Arthur as CEO, Nikhil as CTO, and Mike as CFO.

I must admit that I have tremendous respect for anyone who can make a go of something like this. I can imagine Arthur saying, “Right, get your spanners out lads!”

I was going to refer to Hylio as a startup, but they are long past the startup phase. They spent their first two years experimenting and prototyping. By 2017 they were on the market selling services, and shortly after that they were selling their drones. When you pause to think about this, they’ve now been selling agricultural drones for half a decade, which is a long time in this space.

Since there are so many rules and regulations in the USA, they first started to sell their wares in Central America in countries like Guatemala, Honduras, El Salvador, and Costa Rica. In addition to less regulatory hassle, our heroes found an enthusiastic audience that lacked access to the latest and greatest technologies and that was eager to take full advantage of all that Hylio’s drones had to offer.

With Central American success under their belts, the team returned to the USA armed with facts, figures, and videos. Speaking of which, I just bounced over to Hylio’s YouTube channel where I found this video of the Model AG-130 with its payload capacity of 8 gallons, up to 25-foot swath width, and its ability to cover up to 50 acres per hour.

“Well, that’s pretty awesome,” I thought, “I wouldn’t mind one of those to spray my own lawn” (which would take only about one second to do the front and another second to do the back), but then I saw this video introducing the Hylio Model AG-172, which is the largest spray drone platform on the market! With an 18-gallon capacity and up to 40-foot swath width, the AG-172 can cover up to 100 acres/hour. Now we’re talking business!

Hylio offers a range of 4-, 6-, and 8-rotor drones, the biggest of which is a fulsomely sized 14-foot from tip-to-tip. Since this is still such a new industry, their biggest competitors are Chinese-based, and Hylio is currently the only US company manufacturing these drones at scale (they’ve already sold hundreds of units, and sales are exploding).

The usage model is quite simple. The operator draws a polygon on a Google-maps-based interface to inform the drone where its services are required, and the drone then calculates the fastest and most efficient path to cover that area.

I must admit to being a tad skeptical about all of this at first. “Why would a farmer wish to use a drone rather than a tractor?” I thought. Arthur explained that there are numerous reasons, starting with the fact that a brand new high-clearance sprayer tractor can run you anywhere between $300,000 and $500,000. By comparison, the same amount of work can be achieved for a third of the cost using three of Hylio’s 8-gallon drones, which are only around $40,000 apiece.

There’s also the fact that the sprayer on a tractor is about 120 feet wide, which can be tricky in irregularly shaped fields. Also, you can’t use it to turn individual nozzles on and selectively spray problem areas, such as a patch of crops that’s being attacked by fungus in the middle of a field. It’s true that you can splash the cash for a $1,000,000 tractor with the ability to selectively spray while—at the same time—picking up fungal spores and distributing them along its path as it exits the field. And, of course, all this assumes it’s not been raining heavily, in which case you can’t take the tractor out into the field in the first place. By comparison, a drone could care less if it’s been raining and it can deliver its cargo with alacrity and precision while laughing (metaphorically speaking) at irregularly shaped fields.

Funnily enough, someone at Hylio just emailed me to point me at a report from the University of Illinois. In a crunchy nutshell, my contact summarized this report as saying, “The cost to operate a 310 PTO Horsepower Tractor in 2021 was $189.20 per hour. This year, the cost of diesel and labor has been even higher, which has more farmers ditching land tractors for airborne drone options like the Hylio AG-130 commercial spray drone that costs a mere $39.10 per hour to operate (this includes repair parts/maintenance, labor, battery cost, and fuel cost (i.e., fuel to run the generators to charge the batteries)).”

Well, I for one am now an agricultural drone convert. I would love to see one of these bodacious beauties “up close and personal.” How about you? Have you already been exposed to agricultural drones, or is this concept new to you?