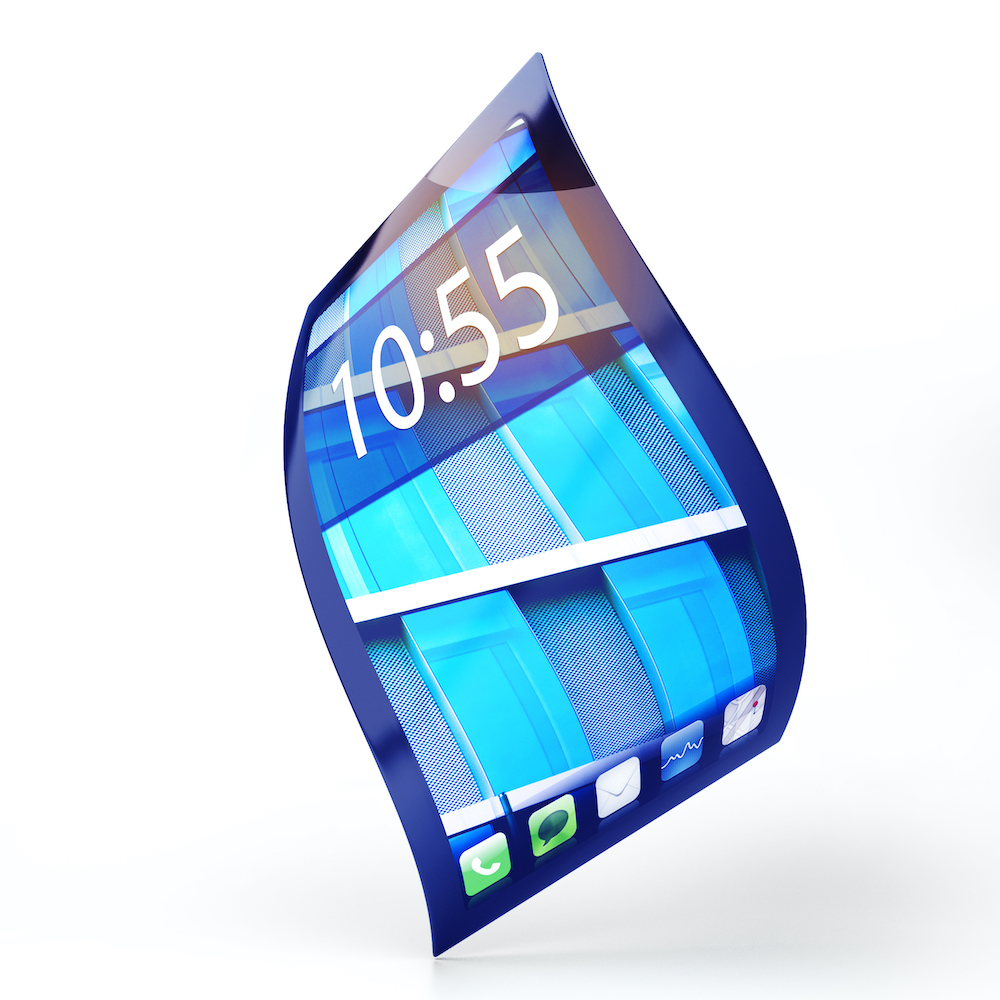 Two Roads Diverged in a Copper-Colored Wood…
by Jim Turley

How flexible is flexible? Marketing people describe their products as “robust and flexible.” Then there are flexible pricing models, flexible shipment schedules, flexible deployments, and flexible morals.

But what if the processor, memory, and the rest of circuitry were all literally flexible – what if they could fold, crease, and bend around corners?

It seems like the perfect solution for tightly packed consumer items like smartphones, cameras, tablets, laptops, and the like. Countless academic papers have shown that fully printed circuits are doable, so why don’t we see more of it? Surely flexible electronics will be the wave of the future.

Matthew Dyson, PhD., is an expert on this topic. He’s the in-house authority on flexible, organic, and printed electronics at UK-based analyst firm IDTechEx. He cautions that it’s important to make a distinction between flexible circuit boards and flexible integrated circuits (ICs). There’s also a difference between flexible electronics and printed electronics, although the terms are often used interchangeably. While printing is compatible with flexible substrates, not all flexible circuits are printed, as we will see.

Flexible printed circuit boards (FPCBs) are actually pretty common, and that business is doing well. We’ve all seen the thin copper-colored strips of translucent film connecting LCD screens to drivers, batteries to phones, and touchscreens to logic boards. That’s a booming billion-dollar industry, with good prospects for growth. But that’s only one kind of flexible.

These flexible interconnects linking different components can be made one of two ways: etched or printed. Confusingly, conventional printed circuit boards (PCBs) aren’t printed. The conductive pathways are etched, with successive acid baths washing away the unwanted layers of solid copper, leaving delicate tracery behind. Most times, the substrate under the copper is laminated fiberglass (generally NEMA FR4), which is hard and solid. Okay for a laptop’s motherboard but not for its hinge.

The same etching process works on flexible substrates, too, like copper-coated polyimide. That allows you to make a thin and light two-sided circuit “board” that will bend and curl, and you can solder components onto it. Those rigid components limit your mechanical flexibility, however. They act as hard “islands” that prevent bending, except with a large radius in between solid components. Even one or two such islands can spoil the cost-effectiveness of roll-to-roll (R2R) manufacturing, the Holy Grail of printed circuitry.

Instead of chemically etching away copper layers, you can print the conductive traces, usually with a silver-based conductive ink. Printing the metal you do want instead of etching away the copper you don’t want wastes less material, which can be important if the board you’re making is large and sparsely populated.

It’s sometimes desirable to replace the orange polyimide substrates with much cheaper transparent polyethylene terephthalate (PET), which unfortunately can’t tolerate temperatures above about 150°C. That means you can’t solder on them with conventional SAC solder and need to use conductive adhesives instead.

Whether printed or etched, soldered or glued, you still use rigid conventional packaged ICs, but now they’re on a flexible substrate. This is what we see in so many phones, computers, and similar items. And in many cases, this is all the flexibility we need.

The next step to increase flexibility is to remove the IC packages and mount bare dies. This effectively decreases your minimum bending radius by making the inflexible islands smaller. Unpackaged dies are also thinner and lighter, which never hurts – although they can be tricky to handle. For something like a crowded smartphone, bare dies might be the only way to compress the assembly into the space available.

On another level entirely are flexible ICs, where the integrated circuit itself bends, not just the interconnects. Turns out, it’s possible to fabricate working transistors by printing conductive, semiconducting, and dielectric inks that can bend, twist, and flex. It’s like a printed schematic come alive.

It’s a neat party trick, and fully printed active circuitry would seem to solve all manner of packaging problems, but the real trick is making it commercially viable. We have proof that the concept works. There’s no shortage of research papers, university projects, or prototyping runs that demonstrate working printed flexible ICs using semiconducting inks on flexible substrates. That’s not the hard part.

The advantages seem tantalizing. The original vision was to print entire circuits, including the logic and memory, onto flexible substrates using continuous manufacturing methods. Picture a full-size printing press cranking out electronic circuits instead of newsprint.

Printed electronics are also quick and easy to revise. They don’t require elaborate mask sets like normal CMOS circuits do, so there’s no million-dollar mask charge or three-month turnaround period. With ink jets, every circuit and even every IC can be different, making printed electronics a cheap prototyping tool.

On the downside… well, there are several downsides. First, printing ICs is largely limited to two dimensions. Conventional semiconductor chips are fabricated in 3D, with p-wells, vias, dielectrics, trenches, crisscrossing metal layers, and more, all stacked on top of each other. Printed ICs are basically flat and two-dimensional, although there are ongoing efforts to print out “taller” ICs. Flattening an IC, even a simple one, spreads it out substantially when you can’t stack features. Tearing down a ten-story building and recreating it all on one level would take up much more than ten times the surface area because you’ve lost all the vertical interconnect (elevators, stairwells, HVAC ducts, etc.) that need to somehow be replicated on the ground. It’s like the old “three utilities” puzzle, but with hundreds of nets. Consequently, printed ICs are huge. Individual transistors often have channel lengths of multiple microns. Printers can’t come close to matching the resolution of today’s photolithography equipment, even in two dimensions.

Sadly, Moore’s Law doesn’t really apply to printed ICs. While the mobility of semiconducting inks is gradually increasing, and the resolution of printing techniques is improving, the transistor density of a printed IC is far from doubling every 18 months, like we’ve enjoyed for so many generations of silicon.

Printed circuitry can also be unreliable. As with any printing technology – newspapers, photocopiers, ink-jet printers – the printing process is imperfect. Conductive inks are sensitive to humidity and temperature, and any break in the ink means a broken net. Misalignment of the layers in a printed transistor is another problem. Look closely at any newspaper or magazine to see how blemished and irregular the print really is. Our eyes and brain happily accommodate those imperfections. Electrons, not so much. As a result, achieving high yields is very challenging, particularly at printing throughput rates that make the hoped-for R2R manufacturing commercially enticing.

And this highlights the biggest underlying problem facing adoption of fully printed electronics. It’s competing with one of the world’s biggest and most advanced industries, one that enjoys billions of dollars of R&D funding every year. Silicon has a 70-year head start. Even the most rudimentary NMOS 8-bit MCU is far more capable (and faster, and smaller, and cheaper…) than the best a printed design could offer.

But that doesn’t stop companies from trying. There are a few narrow markets where fully printed electronics might have a niche. RFID tags are a good example. The circuitry required is simple enough, the cost is low enough, and the flexibility is valuable enough that printing both the antenna and ICs might make sense.

San Jose–based Thinfilm Systems started out making RFID tags based on printed ICs before pivoting to solid-state batteries. The company used roll-to-roll manufacturing, a big selling point for fully printed electronics, to reduce costs. The relatively bulky IC size also isn’t a problem, since RFID tags get affixed to even larger items. But, as other RFID manufacturers have discovered, that market is intensely price-sensitive, making it difficult to eke out any profit, especially when you’re doing it with unique and proprietary technology. Their printed ICs ultimately couldn’t compete with the tiny silicon chips used for RFID tags on cost or capability.

This difficulty shines a light on the fundamental stumbling block that trips up most attempts at completely printed electronics. Which is, why bother? Conventional chips are already extremely small (especially if they’re simple and unpackaged), so they’re effectively flexible already. If a ball-grid array or QFN package measures, say, 3mm on a side, isn’t that small enough to fit anywhere you’d want? Especially if you can mount it on a flexible substrate.

“There is no Moore’s Law for printed ICs,” says Dr. Dyson, “because that’s not the aim. It’s about how many devices you can produce, not how small you can make them. The main benefit was the promise of continuous manufacturing, which would reduce costs, especially if the circuit design needed changing often. Nobody is seriously attempting to catch up to Intel or Qualcomm in performance or circuit density, because that’s pointless. You’re not going to out-silicon the silicon industry. Unless you can complete on cost, silicon is going to win in most cases.”

That’s not the end of the story though, since printing as much as possible of the circuit except the IC keeps most of the advantages of printing. Dyson calls this flexible hybrid electronics (FHE), an approach that recognizes that printing ICs is too difficult to be worth it. FHE keeps the weight savings, the rapid prototyping ability, and (ideally) the compatibility with R2R manufacturing of printed interconnects on flexible substrates. It can also use flexible but not printed ICs – note the distinction. Making circuits with this combination of attributes is attracting attention from major electronics manufacturers, as well as companies across the automotive, aerospace, and defense sectors.

The ambitiously named American Semiconductor is an example of FHE. The company thins conventional unpackaged die down to around 30 microns and encapsulates them in polyimide for protection. Their catalog includes op amps, sensors, and a Bluetooth transceiver. These flexible ICs have a bending radius as small as 1 micron and can be mounted on a flexible polymer substrate, with all the other functionality printed. Crucially, this approach leverages the existing semiconductor food chain instead of trying to replace it, and enables circuits that are far more capable than fully printed ones.

UK-based PragmatIC takes a different approach by making natively flexible ICs. These aren’t printed, but instead use conventional photolithography processes on layers that are thermally evaporated onto a polyimide substrate; the semiconducting layer is a metal oxide. Its in-house fab produces flexible chips for itself and others, and development cycles are shorter than for conventional silicon chips.

Like Thinfilm, PragmatIC primarily targets RFID applications, and the company has garnered investment from ARM and Avery Dennison (the stick-on label people). The process seems to work: PragmatIC has sold tens of millions of its flexible ICs. They seem huge – a few thousand transistors take up a few square millimeters – but their size actually makes them easier to mount onto RFID antennas, where the IC can serve as a bridge.

Fully printed ICs might well have reached a dead end, an avenue that was technically impressive but not commercially viable. Luckily, however, there is an alternative route to realizing the dreams of flexible, capable, mass-produced electronics. As so often in life, the solution is to compromise, in this case by mounting silicon or metal oxide ICs produced via photolithography onto flexible substrates, while still printing the interconnects and other components. Success comes from choosing the right path.

One thought on “Alternate Roads to Flexible Electronics”