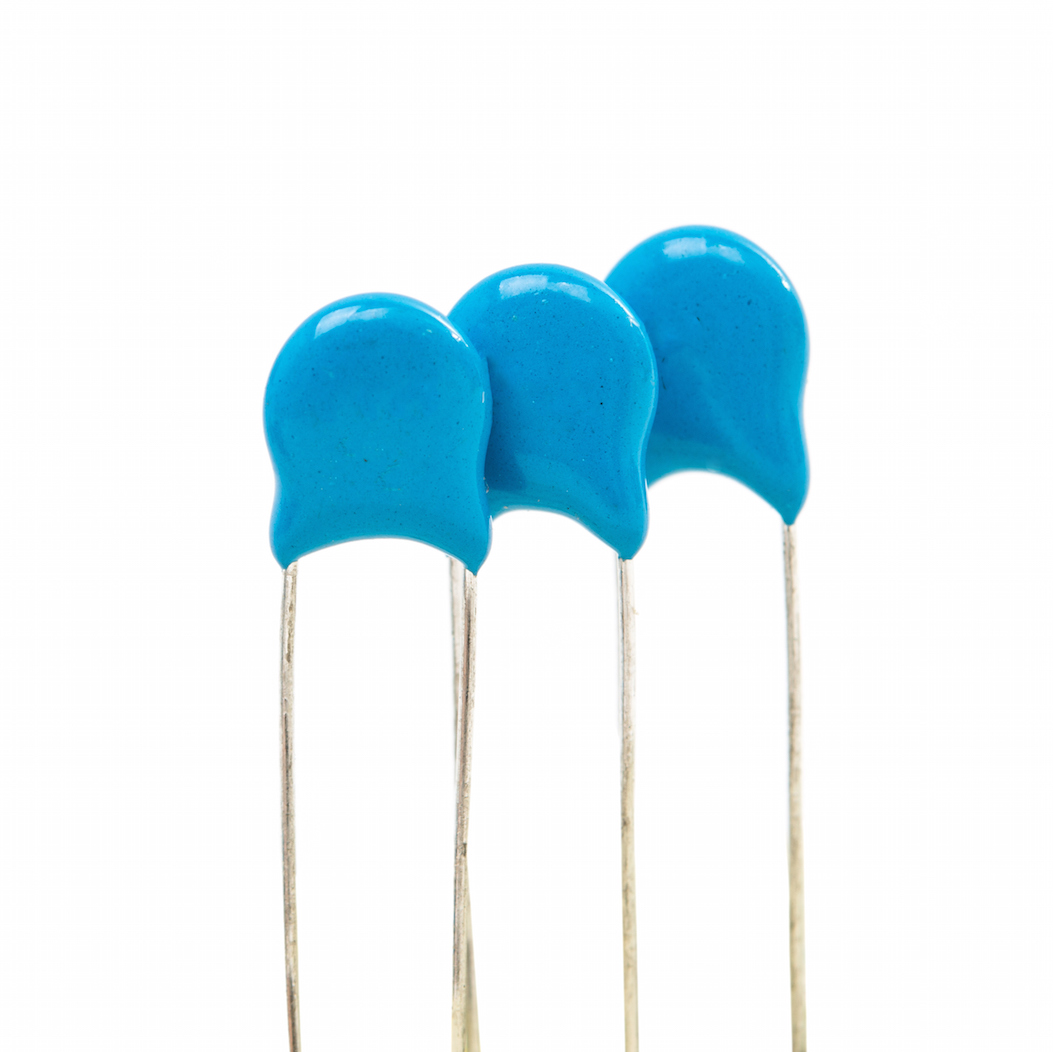 Most of us think about capacitors the way a chef thinks about salt – knowing that it’s never the star of the show, having a keen awareness that you need just the right amount, being vaguely conscious of the fact that there are multiple, subtly different types… When we’re debugging our board, there are often times when something mysteriously isn’t working right. When all else fails, we sprinkle on a few more capacitors. It may smooth out something or decouple something or reduce some bounce. Can’t hurt. Might help.

Similarly, few of us spend much time thinking about the provenance of our capacitors. We know that manufacturing gets cranky when we specify the kind that needs to be hand soldered, and we are sure to hear about it if we accidentally design in the expensive kind. Our BOM-reduction efforts tend to focus on the big-ticket items. Pico-penny passives seldom get a second thought.

It is interesting to consider, though, that there’s a whole industry out there busily toiling away year after year, working to make our capacitors better than the ones we used last time. One company craftily cranking out a wide array of capacitive awesomeness is Kemet. Never heard of them? Not a big surprise. The folks who engineer capacitors don’t tend to play in the same softball leagues with the folks who design processors, RF hardware, or memory technology. Passives are all about process and materials, and capacitor fabrication has a lot more in common with semiconductor manufacturing than with electronic design.

Still, a working knowledge of capacitor technology can really come in handy if you’re trying to seriously optimize your design for cost, performance, form factor, and reliability. Beyond recognizing the cans versus the surface mounts versus the squishy kind, there is far more to capacitors than form factor, and understanding some of the nuances can elevate your design in the same way that a master chef can get that certain…je ne sais quoi…by using just the right type and amount of exotic sea salt to finish the salmon.

In engineering school, (or maybe in high school physics, if we were paying attention) we all learned the basics of the capacitor. There is an anode, a cathode, and some stuff in between. How complicated could it get, right? The anode and the cathode are conductors, of course, and we learned that capacitance is some function of the surface areas of the anode and cathode, the distance between them, and some weird property of the stuff in the middle – that Oreo filling that we refer to as the dielectric. Then, we usually headed off to do our other calculations without considering the implications of the physical device that toils away all day serving up all those femto Farads that we so desperately need.

From a system-design point of view, we really should pay more attention to passives. Very often, when an expensive system fails in the field, the culprit is a sub-penny capacitor that has given up the ghost for some seemingly intangible reason. Field service people are typically not engineers, and more often than not an entire board – or even a whole system – is scrapped because it “just stopped working,” and the RMA unit is shipped back to wait forever in a scrap heap for some post-mortem diagnosis that, even in the best-executing engineering companies, seldom creeps above the cutline.

Yep, the truth is that most of us at some point design in the wrong capacitors, end up with a more expensive, less reliable, or worse performing system than we would have otherwise, and are never the wiser.

Making capacitors is mostly chemistry. There are choices to be made, and they involve the electrochemical properties of the materials used and the processes by which they are incorporated into the component. The common terminology is confusing at best, with the term used to describe the “type” of capacitor relating to a number of disparate factors. Electrolytic capacitors, for example, are those that contain a (usually liquid) electrolyte. No big mystery there. Twelve-year-old you probably first encountered the concept of the electrolyte in some rogue electronics experiment gone wrong, where the end result was some sticky goo oozing all over your fingers out of a can on your homemade circuit board – leaving you wondering whether to have your Mom rush you to the hospital, or to see how some of that would taste on a cracker.

That liquid is both friend and foe. Obviously, anything in our designs that must contain and maintain a liquid for the long term presents a reliability and longevity issue. But the performance of the liquid-containing capacitors (primarily “electrolytic” capacitors and “supercapacitors”) is superior in many ways to that of their solid-state cousins such as ceramic surface-mount capacitors. So, we need to balance our capacitor decision on a number of tradeoffs, depending on our priorities for system cost, form factor, performance, and longevity. In other words – choosing capacitors is an important engineering decision.

Wet capacitors tend to store far more energy than ceramic solid-state devices. Supercapacitors, for example, boast energy densities almost two orders of magnitude greater than ceramic capacitors, and even conventional electrolytic cans cram in about twice the coulombs per unit volume of the surface-mount ceramics. That performance comes at a cost, however. Supercapacitors are expensive, have much lower rated voltages (which must be derated), and come in larger form factors, making them more challenging to fit into your system. Additionally, they typically have to be manually soldered, drawing the aforementioned ire of the folks on the manufacturing side of the aisle.

The venerable electrolytic can is a great choice in many applications – a fact that can be confirmed by cracking open nearly any electronics box and counting the cans on the PCB. Wet electrolytics have decent energy density and good operating voltage range, don’t have to be derated, and are fairly stable with voltage and temperature. The downsides are that the liquid electrolyte will eventually find its way out of the can and evaporate, they’re trickier to mount than surface-mount ceramics, and that dang can sticks up way too high for many form-factor-constrained applications.

One of the biggest considerations in choosing a capacitor is life span, because capacitors are one of the few components in our design that have an expiration date. As much as we like to visualize some far-future human digging one of our creations out of an archeological site, applying some power to the pads, and having our system leap to life after thousands of years, the capacitors (if nothing else) will make sure that doesn’t happen. The primary factors affecting capacitor life are time, temperature, and voltage. Wet-type capacitors gradually lose their electrolyte, so their lifespan is often independent of use. Solid-state capacitors degrade from temperature and voltage.

Despite their low energy density, ceramic capacitors are often attractive because of their reliability (operating life), convenient form factor, and easy mounting options. They tend to have the best operating temperature range, and their already-high operating voltage range doesn’t have to be derated like other capacitor types. They do, however, have lower capacitance with applied voltage, so voltage effects need to be considered. As for the energy density, the answer to lower capacitance is generally more capacitors – which has the added benefit of making your design more robust, as you don’t have a single capacitor as a point of failure. In most applications where a number of ceramic capacitors are used in parallel, failure of one capacitor (or more) will not cause the system to fail.

One new option – tantalum or aluminum capacitors with a solid organic polymer “electrolyte” are becoming increasingly popular. Recently, we chatted with Kemet about their lines of conductive polymer electrolytic capacitors, and they gave us a good comparison of the devices with the more conventional capacitor types (which they also sell). You could think of these as similar to ordinary electrolytic capacitors, but with a solid organic polymer (commonly called PEDOT) replacing the liquid electrolyte (OK, that’s not exactly strictly true, but it works conceptually). These capacitors tend to have very high energy density (better than just about anything besides super capacitors), a good operating voltage range (similar to ceramic caps, but with some derating required), smaller form factors than liquid-filled caps, and simpler mounting options (reflow). In other words, these devices bring most of the benefits of solid-state capacitors, but with the superior energy density we’d associate with liquid electrolyte capacitors. Since there is no liquid, they do not suffer the same shelf-life limitations as those of liquid-filled capacitors.

Behind the scenes, polymer-based capacitors have a MUCH lower internal resistance than liquid electrolytics (an order-of-magnitude higher conductivity). That means far less internally generated heat. Since heat is generally the enemy of reliability, devices that have lower internal resistance introduce far less heat into your system, resulting in many, many good things (starting with the reliability of the capacitors themselves).

One myth that has plagued polymers is that they are more sensitive to temperature than conventional electrolytics. The thing that this myth misses is that conductive polymers start out with a much longer life expectancy than, say, aluminum electrolytic capacitors. Yes, increasing temperature has a bigger effect on the polymer than on the electrolytic, but the end result is still a longer life. Looking at the “problem” the other way ‘round – rather than doubling their life with a 10C temperature decrease, polymer caps gain 10 times the life with a 20C temperature decrease. So – are poly caps more affected by heat than electrolytic? Yes. Do they still live far longer? Yes. Do you gain more life by reducing operating temperatures in your system? Definitely yes.

Poly caps are still in a phase of relatively rapid evolution. Every year new formulations set new performance standards – particularly with regard to operating voltage. While poly caps are definitely not the be-all end-all answer for your capacitor needs, it does pay to carefully consider the properties of the capacitors you’re designing in – particularly for those traditional “throw away” aspects of your design such as decoupling and filtering. By choosing the right cap, you just might solve long-term problems with your system that you otherwise would never be aware of. It’s worth a bit more of your engineering attention.