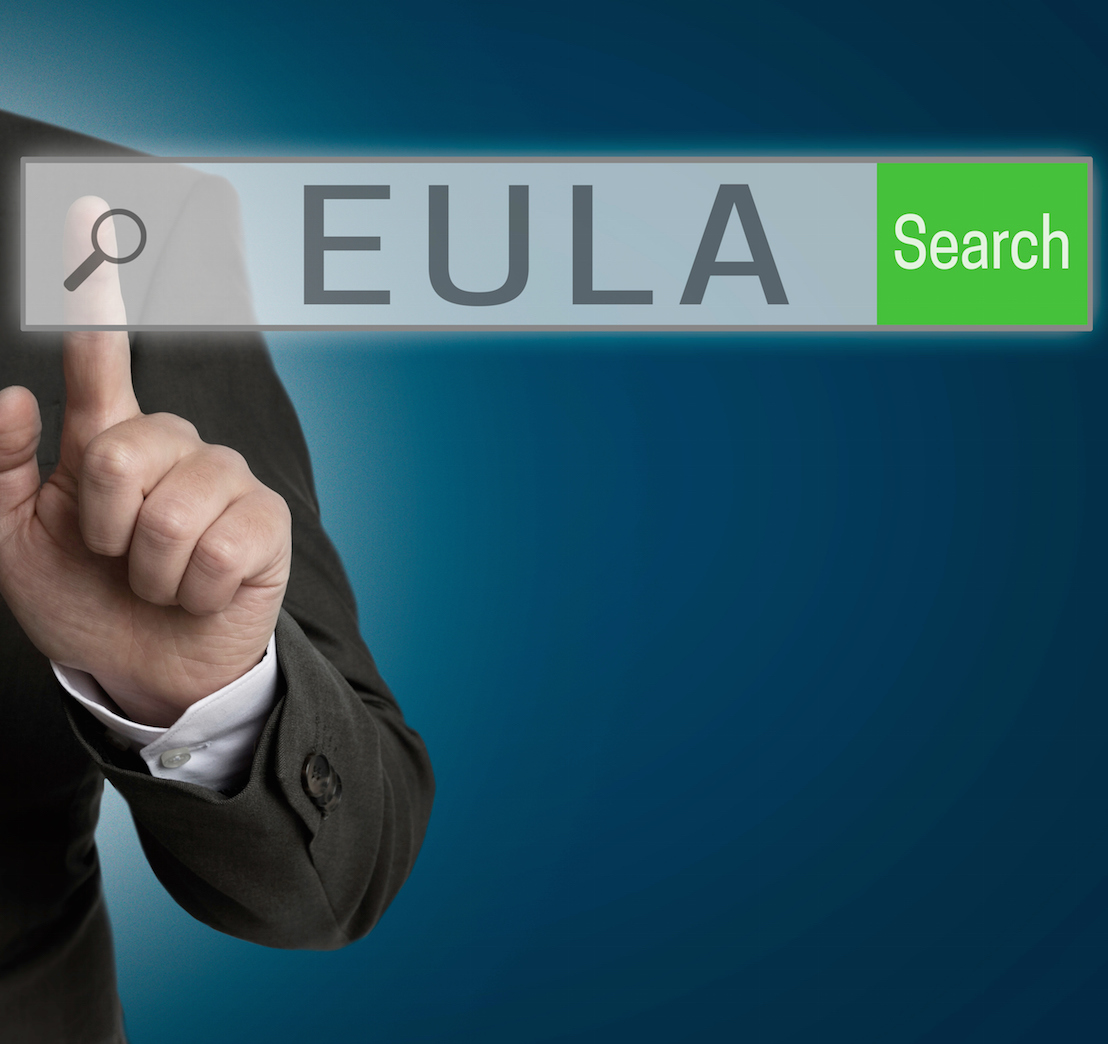 Help! My Product Is Suing Me!

What’s Your Recourse When a Product Changes Features Under Your Nose?
by Jim Turley

“Only free men can negotiate. A prisoner cannot enter into contracts.” – Nelson Mandela

Sometimes you just have to call in the lawyers.

The law is rarely intuitive, and technology-related regulations are even more inscrutable. Oh, sure, we all think we know right from wrong. Family conversations and Facebook faceoffs are filled with people who just know that this company is corrupt, or that that person is guilty. I mean, it’s obvious, right? I don’t need a law degree to tell the good guys from the bad guys.

Let’s say you’ve got a shiny new cellphone. It works great, it runs dozens of apps, and it even makes phone calls from time to time. Best of all, the manufacturer adds new features and bug fixes all the time. In fact, hardly a week goes by that you don’t download a new firmware upgrade. And like clockwork, you get the next release of the OS and eagerly anticipate the new features, new GUI elements, or new bug fixes. It’s exciting!

But what happens when a feature is removed? Let’s say a built-in app disappears after the new release. Or that VPNs are no longer supported. Or your photos are no longer backed up to the cloud every night.

Can the manufacturer do that? Can they legally remove features that you paid for? What if that feature was part of the reason you bought the phone in the first place? What recourse do you have when the manufacturer removes a feature from your product after you’ve already purchased it?

If you ask the hive mind at Twitter, Reddit, or your corner bar you’ll likely get some version of, “Sue the bastards!” followed by a forcefully presented but poorly reasoned justification. “You already paid for it!” they’ll say. “They’re messing with your property,” they’ll argue. “It’ll get fixed in the next release,” they’ll bleat hopefully.

What’s the real answer? As with most legal issues, “that depends.”

This isn’t a hypothetical situation, nor is it uncommon. Amazon remotely deleted content from customers’ Kindle devices because the company thought they’d run afoul of local copyright laws – a problem when you’re travelling internationally. Last week, Code42 (the company that runs CrashPlan) served notice that its app and its service will both stop working in a year, but they didn’t offer any alternative for users with large data sets. And Sonos, which makes wireless speakers, decided that its customers must agree to a new privacy policy allowing the company to share some customer data with unnamed third parties. Don’t like the new terms? Tough luck. Sign it or we just might disable your speaker.

Can companies really do that? Can they retroactively change a product that’s already in the hands of paying customers?

Of course they can. They do it all the time, and we normally applaud that as a feature. The new Siri works better than the last one. Your Tesla gets better “battery mileage” than before. Your game console gains the ability to stream movies. And so on…

But what about when features are removed? Is that legal? And what if I really, really liked the old version better?

This is one of those areas where gut instinct, hunches, and barstool expertise are no substitute for genuine professional legal advice, so I contacted several practicing lawyers and legal experts to see what they thought. What’s the real, legal opinion about retroactively removing features?

Their opinions – which I can’t quote directly because they’re not offering paid legal advice – boils down to four points.

First, that this is an area of contract law, not product liability, consumer protection, or IP rights. Second, that contracts are, by definition, voluntary. Third, that software updates are also usually voluntary. And finally, that product manufacturers have already thought about this, and they’re way ahead of the rest of us.

Remember that EULA (end-user license agreement) you signed when you got your new phone? No, me neither. But practically every piece of shrink-wrapped software, every download, and every consumer item with a microcontroller in it comes with a EULA, and we usually just click through it and move on. That’s a contract, and you agreed to it voluntarily, and it probably allows the manufacturer to do anything they want with “your” product’s code.

You are, as they say in the business, screwed.

Apple’s legendary 406-page EULA for iOS 10 says right on the front page, “The iOS Software Updates, if any, may not necessarily include all existing software features or new features that Apple releases for newer or other models of iOS Devices.” In short, Apple is under no obligation to maintain the feature set you have now, nor do they have to offer you the same features that everyone else gets. (To be fair, Apple’s EULA is in several languages. The English portion is about the same length as Microsoft’s EULA for Windows 10.)

But – and this is a big but – those software updates are voluntary. You don’t have to upgrade to the new version of iOS if you don’t want to. This starts to get into the gray area of “informed consent.” If you know ahead of time what features, bug fixes, or other changes the new version offers, you can make an informed decision whether to download and install it. If you’d prefer to stick with your current version, you’re free to do that. Lots of people still run Windows 7 (and millions still use Windows XP), so you’re well within your rights to Just Say No.

The manufacturer might be liable if they failed to disclose something that would have changed your mind, such as an update that removes a feature or adversely affects your user experience. But, even in that situation, you’re generally able to reverse the update and revert to an earlier version of software that you prefer. It would be hard to show damages in that case and, therefore, hard to bring a suit against the manufacturer.

A slightly grayer area is the first purchase. Did you buy the product because it included a specific, material feature, and was that specific feature later removed? Here again, it depends on the contract (the EULA) between you and the manufacturer. Chances are, you agreed to let the manufacturer make changes to the product, just like Apple’s example does.

That same EULA says, “If… you do not agree… you may return the… device within the return period…” So, if you don’t like the contract that came with your new gadget, you’ve got a few days to give it back and they’ll call the whole thing off.  But you can’t sue the manufacturer. Your recourse is a refund, not damages.

The law is a tricky thing, and it’s rarely intuitive. It may not seem right to allow a faceless conglomerate to reach into our gadgets, our cars, our phones, or our video games and unilaterally decide what features they get and what they don’t. Software defines so much of what a product is, that changing the software can radically alter its value and its desirability. A firmware update that cuts your electric car’s battery range in half would diminish its usefulness to you, as well as tank its resale value. A security camera that spontaneously posts YouTube videos from your living room would be a huge invasion of privacy. A cell phone that tracks your whereabouts and the people you’ve called would be… oh, wait.

Yet when we’re the software developers or product managers, we want to be able to change features without notice. We want to be able to deprecate outdated APIs, ditch little-used features that take up too much ROM space, or discard old GUI paradigms. We want to innovate! We need the freedom to update firmware, add features, and “improve the customer experience,” right? So what if a small handful of those customers liked the old firmware better? Screw ’em – we’ve already got their money and they’re not our target demographic anyway.

EULAs and similar contracts do provide a lot of legal cover for manufacturers, but they aren’t a Get Out of Jail Free card. Voluntary or not, informed or not, you can’t draw up a contract that allows you to shoot someone in the foot if they don’t walk on their hands while humming the Gilligan’s Island theme song. No amount of consent will make that enforceable. So product manufacturers do have limits – limits that change by country and by jurisdiction. As all-encompassing as a 406-page EULA may seem, it still doesn’t allow Apple to make iPhones explode without warning, as tempting as that might seem. EULAs may hold you hostage, but they don’t let manufacturers get away with murder.

What do you do if you’re the programmer? How do you know where the limits of your product innovation lie? My advice is to not take your own advice. What seems obvious, intuitive, or “just right” rarely is. Sometimes, you just have to call in the lawyers.