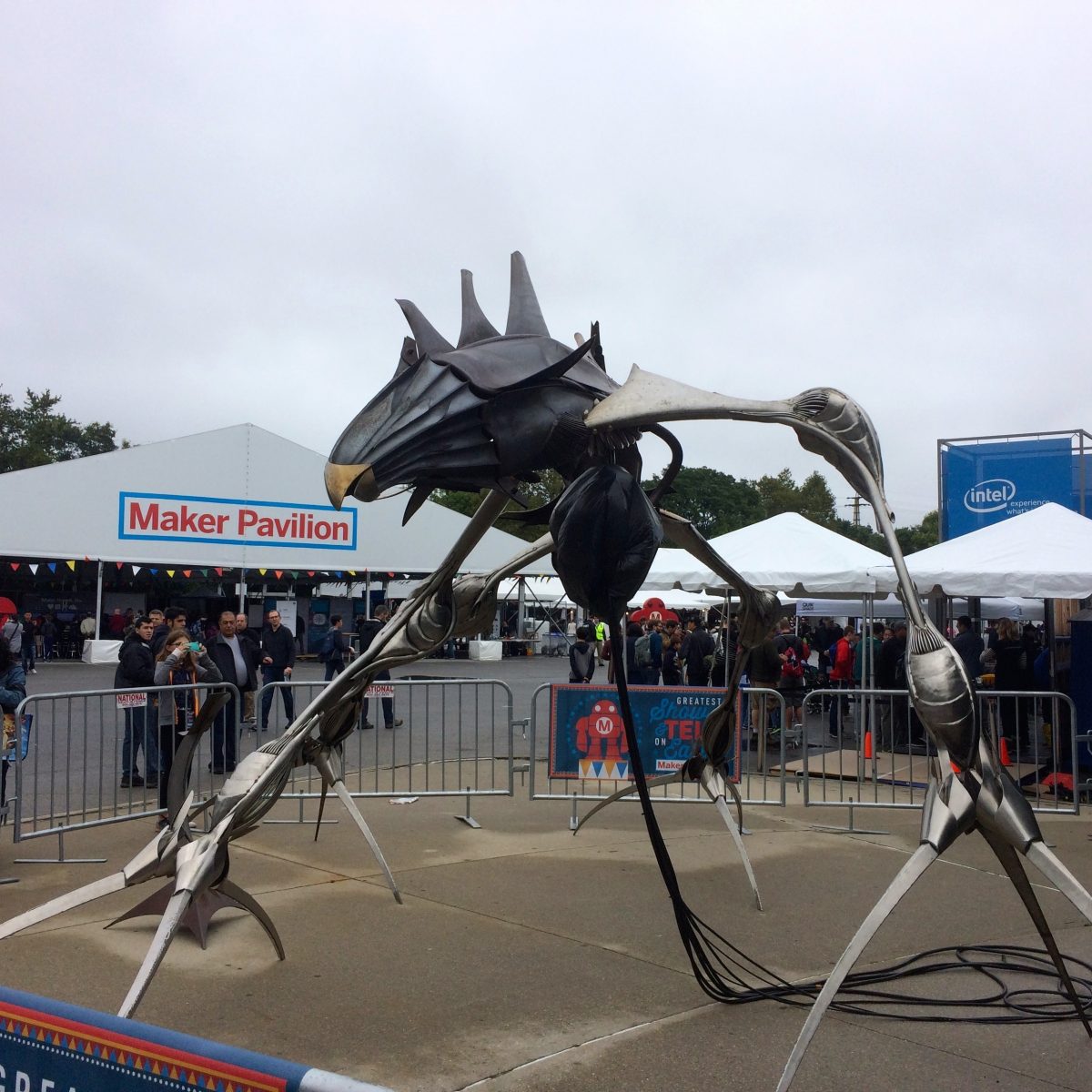 What World Maker Faire Shows Us About the Future of Engineering

World Maker Faire is an event defined by its energy. In past years, EE Journal has tried to capture this mix of inspiration, enthusiasm, and community in our coverage of the Faire in previous years. But perhaps the best way to convey a sense of the event is to present a collection of quotes from people talking to our EE Journal team this year at the Faire, or that we overheard while walking around:

“My project doesn’t have any practical utility… but it’s cool.”

“The energy here… I mean, there’s things that breathe fire!”

“We kind of want someone else to steal our idea. Because it’s a great idea, but we only kind of know what we’re doing.”

“It’s very different from other industry events… where else are you going to have a press briefing interrupted by a brass band?”

“This might be our FIRST drone race with three finishers! Okay everyone, concentrate and will him through the rest of the course and…. Awwww! He fell victim to the Announcer’s Jinx!” 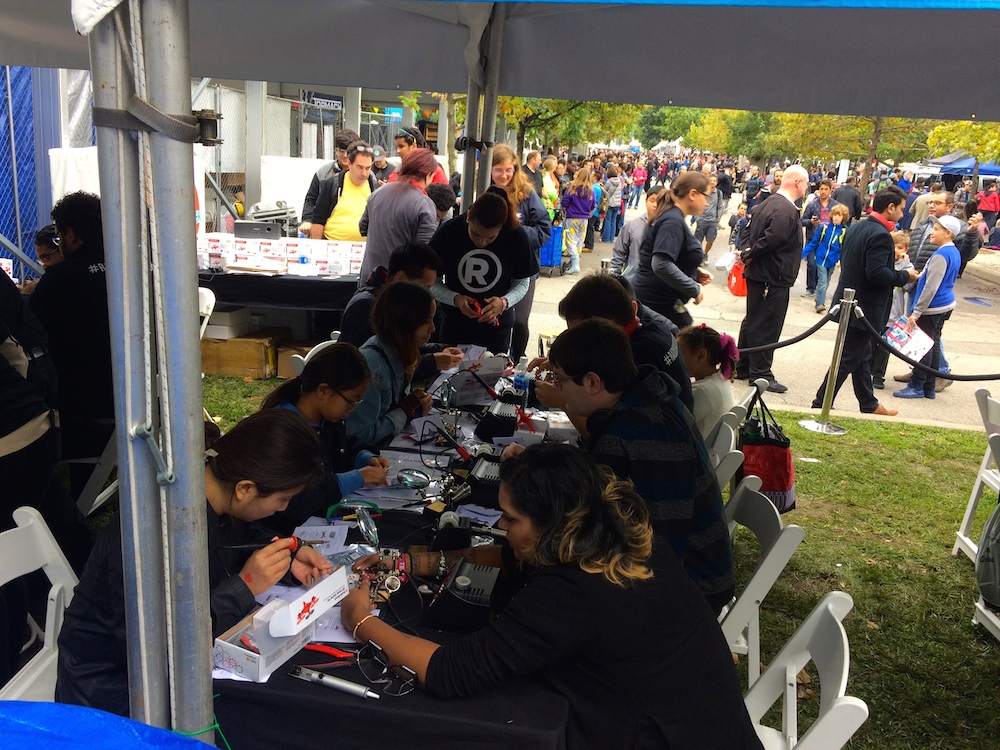 Perhaps because they’ve begun to sense this change in the tides, this was the first year three of the largest electronics distributors had an official presence at World Maker Faire. Mouser, Avnet, and Digi-Key all had booths at this year’s Faire, complete with displays and demos and product offerings selected to appeal to makers. They appear to still be trying to understand the maker space: figuring out what they have to offer the maker community and how best to provide what makers want and need. They’re learning to speak the maker language (which is as least a different dialect than the one they’d use when speaking to traditional engineering professionals. You don’t approach a maker by saying: “We’re here to help you reduce your BOM cost and minimize your supply chain risks.”). These companies are trying to meet the makers where they are and lower their barrier to entry (and the price point) of electronics engineering to appeal to the newcomer who wants to play with sensors and make LEDs light up, while also having something for the veteran maker who’s ready to go much deeper and start looking at some data sheets.

Avnet, Digi-Key, and Mouser are also attempting to build a bridge between the hobbyist do-it-yourselfer and the professional electronics engineering world. Being “on the ground” at World Maker Faire, it’s easy to see why such a bridge is vital: any one of the independent makers showing their project at a tiny booth in one of the corners of a tent could potentially be the next great startup success – with the right tools, support, and connections. The eight-year old who happily built a racing insect robot today is going to be ready for something much more complicated next year. And the year after that. And the year after that. Eventually, they’ll have had their fill of blinking-LEDs demo board gateway drugs and be ready for the hard stuff. The electronics engineering world needs to be ready. 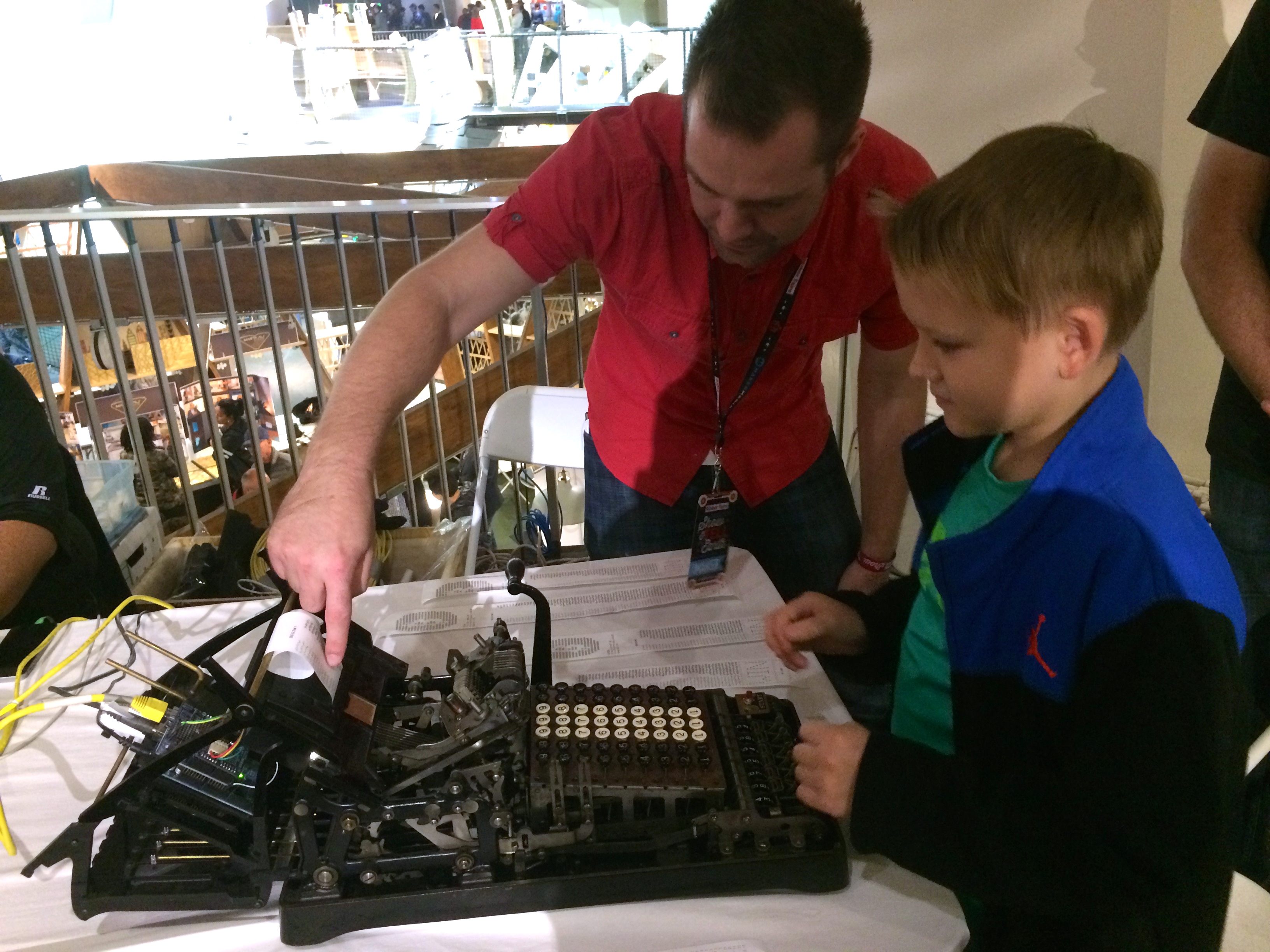 These maker-engineers of the future are a different breed. They’re not following the typical “I was good at math in middle school, so now I’m going to major in engineering in college” path. So many of the makers we spoke to at this year’s Faire began explaining the project to us by saying something like: “Well, I’m not an engineer, but…” and then went on to detail all the difficult technical problems they had to solve and complex solutions they had to design and build in order to make this project that they were incredibly enthusiastic about. 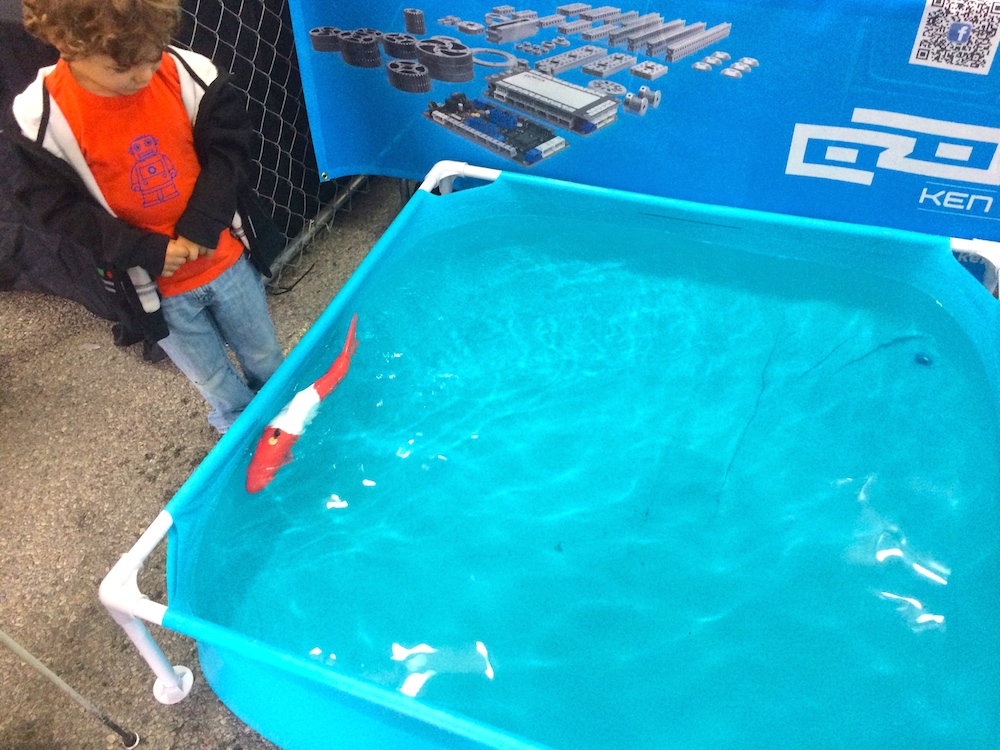 The makers and mentors staffing the Arduino booth are very aware of this different approach to engineering. They talk about their success with young people who are either unexcited about or intimidated at the idea of learning to code, but really, really want to make a light-up dress that changes color when they spin around in it. So they learn to code and build and whatever else they need to do to create what they imagined. Passion and project first, technical skills second. Engineering education that can meet people wherever their passion and enthusiasm is and help guide them to the expertise they need to accomplish their goals is what’s going to bring the new generation into the engineering fold. The attrition rates in college engineering programs and the lack of new blood in the electronic engineering world is a problem, but the maker movement will provide the solution. 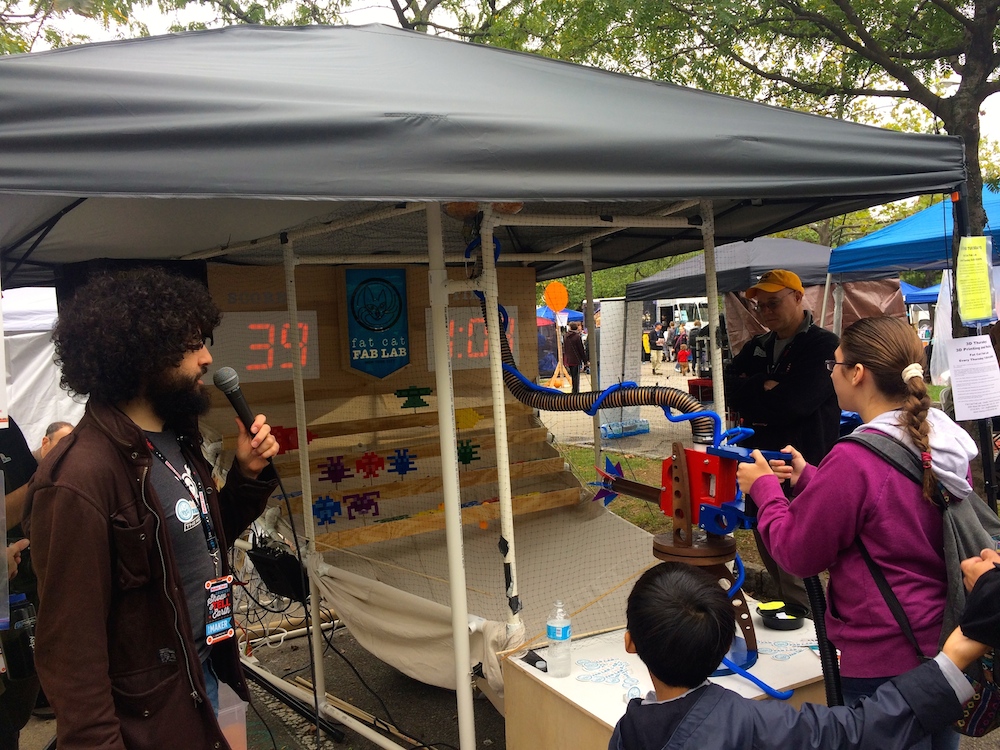 In addition to bringing their fresh maker energy and enthusiasm to engineering, makers are also bringing a different perspective. These people who are “not an engineer, but…” are artists or environmentalists or grassroots activists or people who just really want to play with cool toys. Their ideas are different. Their approach is different. And these different ideas and approaches are vital. The value of the maker movement’s outsider-inclusiveness was best summed up by Xanthe Matychak, an Infosys InfyMaker Award winner, who said to us: “It’s problem solving. And everyone has problems. If only engineers are solving the problems, it’s like the person who operates the printing press writing all the books.” 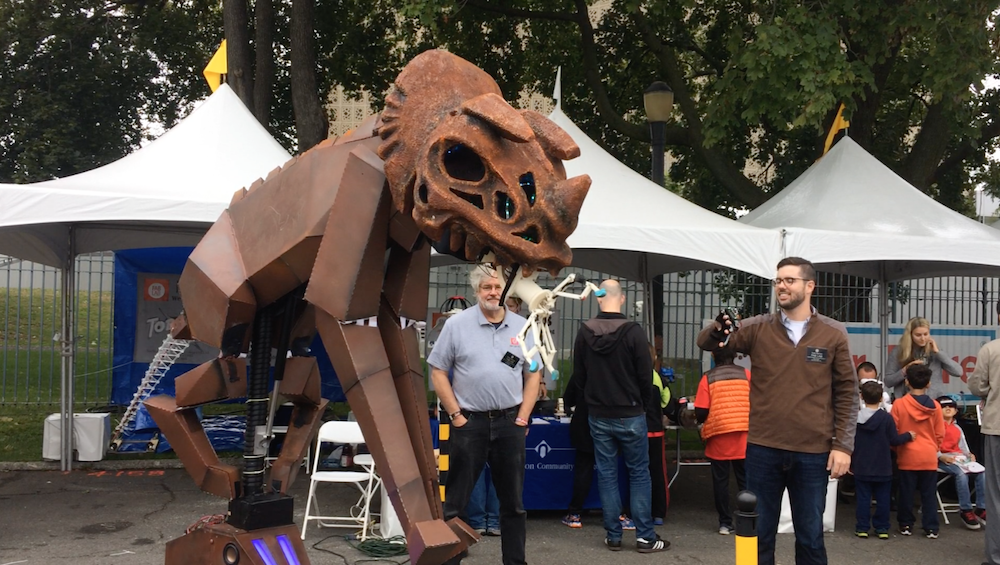 One of our EE Journal team’s last stops at this year’s World Maker Faire was NASA’s tent where they were showcasing individuals and teams competing in several of their Centennial Challenges. Makers were showing off their robots and satellites that they aimed to actually send up into space. Standing in the NASA tent, it struck me that it feels incredibly appropriate that NASA should have a presence at Maker Faire. In a way, NASA and humankind’s journey into space is an ideal metaphor for the maker movement. We went to the moon because we thought it would be cool. We didn’t go because we thought the cure to cancer was hidden up there or that we’d find some revolutionary new energy source inside moon rocks. Along the way to the moon, we had to solve problems that led to some of the most incredible engineering innovations of the 20th Century. But none of those inventions or discoveries actually required a human standing on the moon in order to be realized. Actually having a human on the moon got us some neat rocks and photos of humans standing on the moon. The major feats of engineering happened along the way; they weren’t the goal. The goal was going to the moon because we thought that would be cool. That is the maker attitude. The path to the future in engineering is the long and winding road that hits on amazing, complex discoveries on the way to a destination that was selected because some makers imagined it and thought: “That seems like fun.”