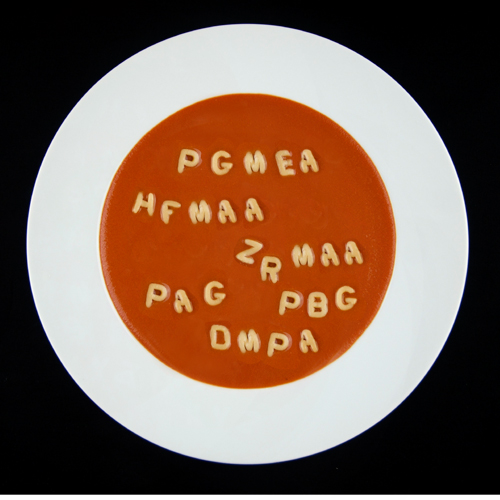 Are They Next In Line for Aggressive Nodes?
by Bryon Moyer

Back when we covered the state of EUV lithography, we mentioned yet another ongoing resist tale: that of nanoparticles. It seemed like its own independent story, but, as it turns out, it’s part of a larger narrative – one we’ve already broached in the past.

This whole resist angle of EUV has dragged me kicking and screaming deeper into the world of chemistry, a realm where I don’t exactly feel at home. And yet, there are some interesting things going on, so I do the best I can. The good news is that many of you may also not be chemists, and so I can share the discomfort. You’re welcome.

A nanoparticle is a small cluster of molecules of… something… having size on the order of nanometers. For this resist, nanoparticles are adorned with other organic compounds generically referred to as ligands, meaning that they bind to stuff. At this level, it feels different from other things we’ve looked at. That is, until you dig one level deeper to find that the core of these nanoparticles consists of a metal oxide.

Of course, metal oxides are all the rage this year as Inpria’s new metal oxide resists have gotten some traction. So, suddenly, this nanoparticle thing doesn’t seem quite as independent as I was thinking. And, in fact, it turns out that both the nanoparticle thing and the Inpria thing might have been spawned in the same creek, so we need to wade upstream to get the context.

Today’s conventional resist is referred to as “chemically amplified resist,” or CAR. The amplification came about as a result of concerns a long time ago that the lithography exposure light available might not be strong enough for a commercially viable process. So conventional photoresist was doped with so-called photo-acid generators, or PAGs. When exposed to light, they release acid, which causes a dramatic solubility change in the surrounding resist, thereby amplifying the resist’s own photoreactive tendencies.

That’s worked well enough for a number of generations, but, as we scale down to smaller dimensions, a previously ignored situation has become impossible to ignore further: the acid diffuses. You want a sharp edge at the boundary where light does and does not expose the resist, but the acid in the exposed side can bleed over into the unexposed side. And at aggressive dimensions, the diffusion matters.

One idea has been to bind the acids to polymers. That’s the equivalent of putting the acid on a leash; it can diffuse, but if it tries to go too far, it hits the end of the leash and goes no further. This can help to limit the amount of boundary fuzziness caused by acid diffusion, but it doesn’t outright stop it.

Another issue with CARs is that the PAG is blended in in relatively small quantities, and it’s a highly disordered mix. So it’s very difficult to get the PAG uniformly distributed throughout the resist, adding yet another source of variation. Like we don’t have enough already.

A final weakness of CARs is that, by their organic nature, they’re like a really thick, viscous goop. When a thick coating is exposed and etched with fine features, you end up with pillars of this goop that have a tendency to collapse. It would be nice to find something firmer.

These issues spawned discussions of completely new systems. They were predicated on the idea that large molecules (like metal compounds) will absorb more UV light than small carbon and hydrogen molecules do in simple organic materials, boosting sensitivity. Metal oxides became a focus of this new track.

The nanoparticle work has been ongoing for some time, having been started as a possible resist for high-index 193-nm photolithography. It evolved from there into an EUV thing.

The two main players here seem to be Inpria, a private company, and Cornell University, under the direction of Prof. Christopher Ober; I had a chance to speak with both. There’s an asymmetry here, however: Cornell is an academic institution, and so it’s been open with its results, specifically sharing them with Inpria. Inpria, meanwhile, has been – and continues to be – very guarded about what it’s doing. So it’s not clear what – if anything – Inpria learned from Cornell, but Inpria is clear that the end result is chemistry that’s very different from what Cornell is doing.*

That said, there’s some commonality: those metal oxides. Just for reference, Inpria’s resist, when exposed, causes the metal oxides in the resist to condense into a high-density film that resists etching. Whatever ligands they use have their bonds broken by secondary electrons, facilitating the condensation. They do use nanoparticles in their formulation, but this generally isn’t what’s meant when people talk about “nanoparticle resists.”

Cornell has a different process, although it’s important to note that there are still a number of options being evaluated and tested, so it’s by no means a finished work. This project is typical of what “nanoparticle resist” refers to.

The basic idea behind the Cornell work is to start with nanoparticles of metal oxides. They’ve worked with a number of different metals, principally hafnium and zirconium oxides, although they’re also looking at titanium, indium, and tin. The nanoparticles are 2-3 nm across, and they’re then adorned with carboxylic or sulfonic acid ligands. One outcome is HfMAA (in the case of hafnium), or hafnium methacrylic acid (and there’s a zirconium analog, ZrMAA). Yeah, the alphabet soup is gonna get thick here; better buckle up. 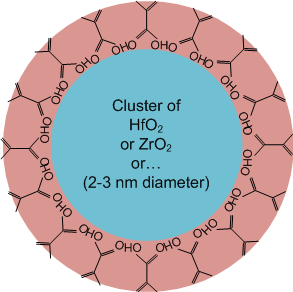 The overall resist soup is made, in at least one recipe, by taking, say, HfMAA, and dissolving it (at 5-10%) into PGMEA – propylene glycol methyl ether acetate (yeah, let that one roll around your tongue a few times), apparently a common coating solvent – and then adding 1-10% of a photoactive compound. That latter bit can be either a photoinitiator, like DMPA, which creates free radicals when exposed to light, or a PAG.

In the case of the PAG, however, the mechanism is very different from what happens in a CAR. Rather than the acid increasing solubility, it actually strengthens the ligand bonds, reducing solubility. This provides a negative-tone resist, and it’s developed with no post-exposure bake (PEB). For a positive-tone version, a PEB can be used, which decreases the solubility of unexposed regions.

There’s yet another possible mechanism to use, referred to as sol gel condensation. Just to get us all baselined here, a sol is a material where small particles are suspended in a liquid. Critically, they have to stay suspended – if they can eventually settle out, then it’s not a sol. A gel is similar, except that the particles are interconnected in a network. The condensation can be catalyzed by a photo-base generator, or PBG.

And there’s yet another subtlety. Zirconium absorbs more 13.5-nm light than hafnium, so you can blend the two to tune the sensitivity. Sensitivity is also affected by the film density, and that’s tuned by the organics.

This leads to what has, so far, been the success of these nanoparticles: very good sensitivity – better than what Inpria has achieved. On the flip side, the relatively large nanoparticle size – 2-3 nm vs. well less than 1 nm for Inpria – means larger grains, and this works against resolution and line-edge roughness (LER).

Of course, fabs and foundries won’t like all these options and alternatives; they want one recipe for everything. The nanoparticle project hasn’t achieved that state yet – and the clock is ticking.

Prof. Ober says that he sees a 1-1/2 to 2-year window where CARs will run out their useful life, and the nanoparticle work needs to converge during that time in order to become commercially relevant. He thinks that this is possible to achieve. But it’s my sense that they’re realistically competing with Inpria, and if Inpria can get their sensitivity up – work that’s said to be in process – then they may have an edge simply because they’re already out there with a commercial offering.

Looking far into the future, Prof. Ober briefly mentioned that there’s been talk about decorating individual molecules (as opposed to clusters of molecules) with ligands, which would represent a dramatic reduction in grain size – good news for resolution and LER. But that’s for a future story, if it even happens.

So that’s what’s up with nanoparticle resists, at least as I understand it. We’ll follow developments if the current work evolves into something that a commercial company picks up and runs with.

*There may be one more player here, but I haven’t been able to identify or track it down yet. If I do, I may come back if there’s other new news to discuss.