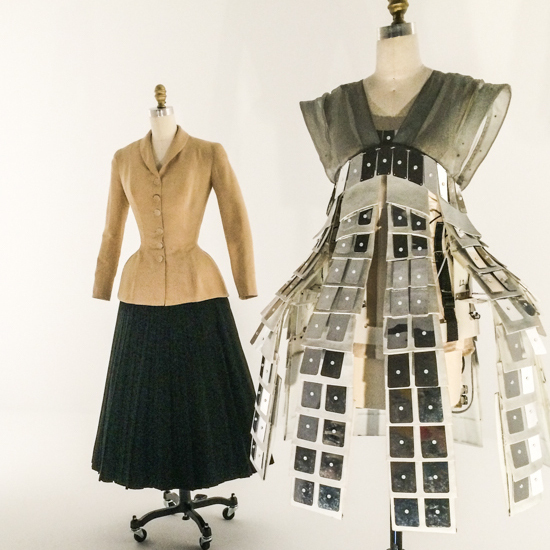 A Fashion Exhibit for Makers

The Costume Institute at the Metropolitan Museum of Art just opened their new Spring/Summer fashion exhibit: “Manus X Machina: Fashion in the Age of Technology,” focused on the distinction between the handmade (manus) and the machine made (machina) in the world of fashion and garment creation. This is a fashion show for makers. Beyond just the word “technology” in the exhibit subtitle, which for some people might hold promises of robot dresses or futuristic materials, this is an exhibit with an intense focus on how the featured garments were actually made: what materials were used, what processes were used, and how various different parts were put together.

As some of the introductory text on the walls of the exhibit explains, “hand made” and “machine made” each comes with a set of associated ideas and stereotypes. The “hand made” is associated with the one-of-a-kind, the custom-designed, luxury and elitism. The “machine made” is associated with the mass produced, the efficient, the working class; it might be considered a bit cold and soulless. The exhibit immediately goes to work breaking down these stereotypes and blurring the lines.

While the exhibition does feature some of the most elaborate haute couture gowns of the 21st century (alongside explanations of the hundreds of working hours artisans put in to hand stitching each piece) juxtaposed with dresses that are entirely printed, the vast majority of the 170+ ensembles featured within the gallery are made with a combination of hand and machine based processes. 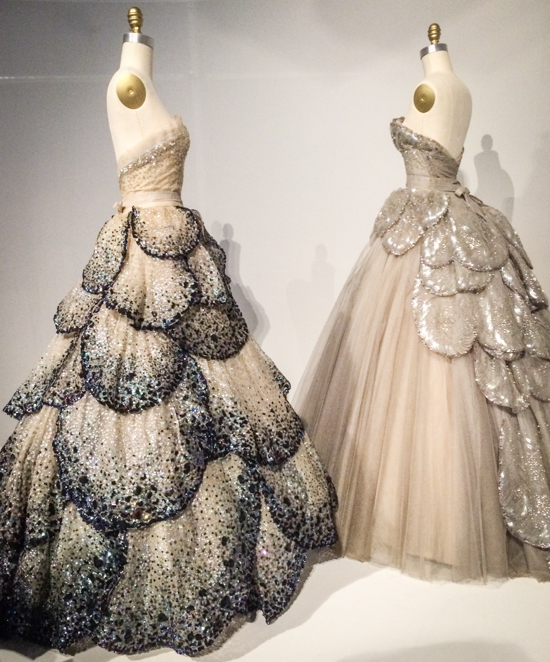 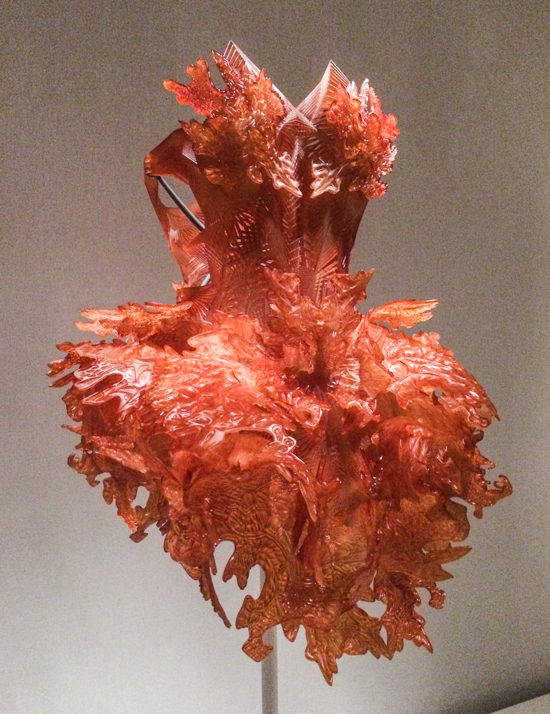 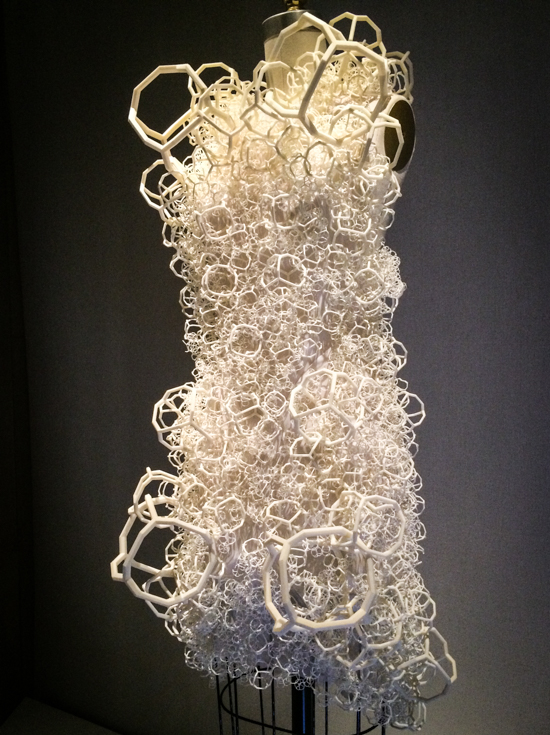 A dress in one of the alcoves is hand sculpted using magnets. Designer Iris van Herpen poured a soft rubber material with metal powder incorporated in it over a cotton fabric base and then manipulated the material with magnets before the rubber cooled and hardened. A painstaking, “hand made” process combined with a technological innovation like one Walter White might use to impress Jesse Pinkman. 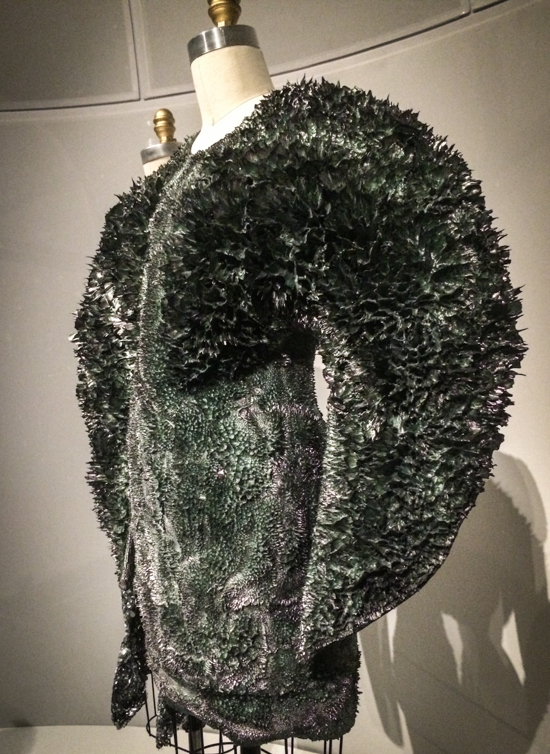 A fiberglass dress by Hussein Chalayan is machine painted and hand “embroidered” with winged pollen embellishments. The dress is remote controlled. The model steps into the back, and then the dress’s built-in wheels move her around. With the push of a button, the pollens release from the dress and into the air, swirling around the wearer. (Here’s a video of the dress in action.) 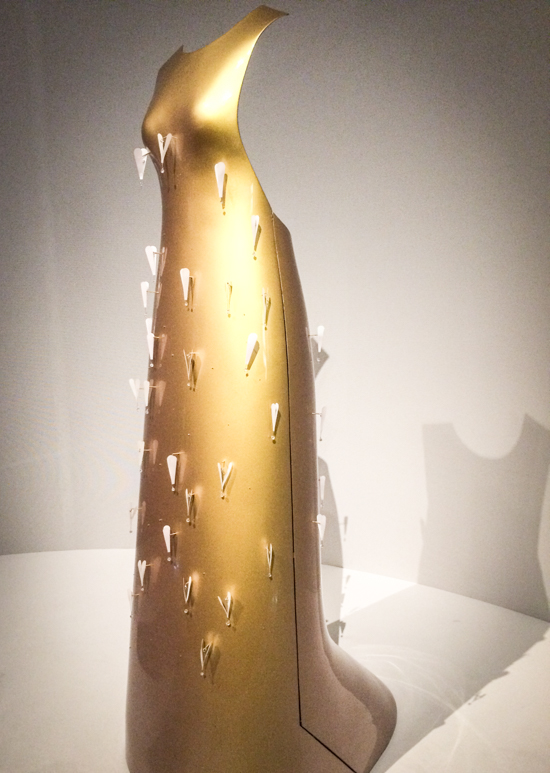 In garments like these, the technology or machine-made processes move away from the “mass produced, soulless” stereotypes and become instruments of beauty and custom craftsmanship.

A placard next to each garment carefully details every material used in its creation and how that element was incorporated: by hand or by machine. This is the most making and maker-focused fashion exhibit the Met has ever displayed. While previous exhibits have focused on specific designers (like the highly attended Alexander McQueen exhibition) or points of inspiration (last year’s “China: Through the Looking Glass;” 2008’s “Superheroes: Fashion and Fantasy”), or particular movements and aesthetics (2013’s “PUNK: Chaos to Couture”), this one keeps its spotlight pointed on the actual making of the garment. What did the designer use to make this? Why did they choose one process over another? How did the various materials and techniques help them accomplish the goals they had for their dress and the design challenges they had created for themselves? 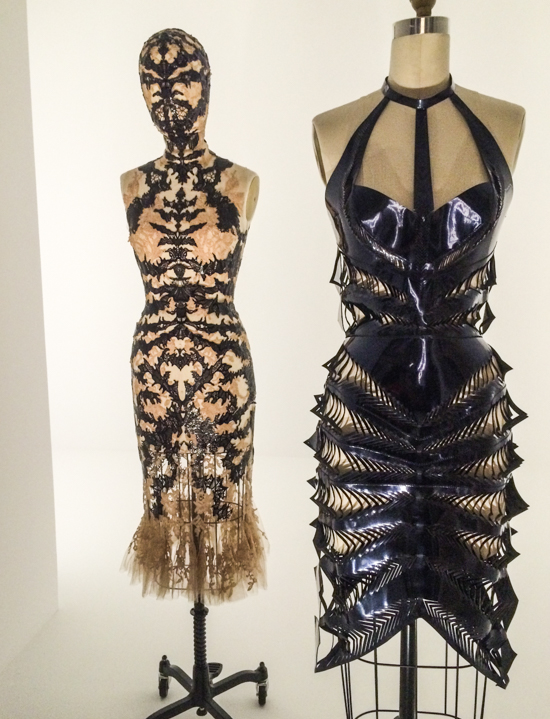 The exhibit emphasizes themes I’ve already written about for EE Journal: the synthesis of art and technology in the maker movement and the modern maker movement’s roots in much older artisan processes. The exhibit highlights questions of when certain crafts or techniques are elevated to the level of “art.” The exhibit organizes itself around Diderot’s Encyclopedie: the first work to elevate fashion to the same status as the arts and sciences rather than as a working-class trade. One can easily draw a parallel between that idea and the elevation of machine-made clothes from their efficient, “off the rack” reputation to the level of high fashion within the exhibit. Here, technology is both a democratizing force (making certain fashion processes cheaper and more accessible to a wide audience) and a catalyst or tool for even more revolutionary, luxurious designs. 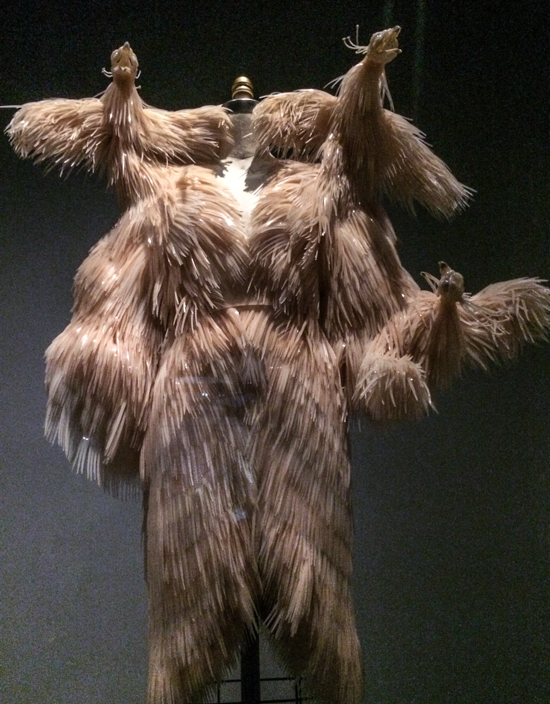 At the 2015 3D Printing Conference and Expo, Lucy Beard, the founder of Feetz, spoke on a panel about 3D printed fashion. She and her fellow panelists emphasized how 3D printing technology could actually create the most customized clothing and shoes ever made: designed to the exact shape and specifications of one individual. The truly great potential of 3D printing is, Beard said simply: “clothes that fit.” This is another blurred line in the world of “Manus X Machina” – machine-made garments more custom and individualized than even the best hand-crafted couture and potentially available to a mass audience, rather than as luxury items for the wealthy few.

This conversation of technology vs hand-made, luxury vs working class, art vs mass-produced product becomes even more interesting when one considers the exhibit’s big sponsor: Apple. Apple is a technology company that has deliberately associated its brand with a very specific, recognizable design aesthetic (one which “Manus X Machina” clearly draws on in the design of the exhibition itself), and makes one of the best-known and most-widely owned technology and fashion accessory in the world: the iPhone. The iPhone is both one of the most complex and sophisticated pieces of computing technology ever created and a fashion accessory — one that everyone buys “off the rack.” There is no special, luxury couture version of the iPhone. Interestingly, this is something the company changed for the Apple Watch: there are versions that scale from the cheaper “sport” version to the much more expensive “made from actual gold” one that Beyonce gets to wear around. It’s no surprise that Apple would be veeeeeeeery interested in an exhibit that celebrates the intersection of technology and fashion and supports the elevation of machine-based processes and techniques to the level of high art and fashionable desirability. 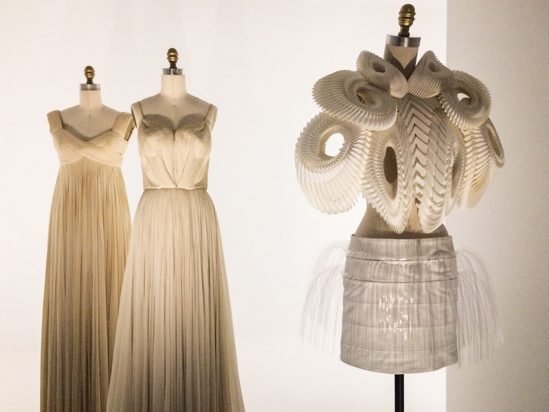 Technology and the hand-made. Art and commerce. Exclusivity and democracy. These are all issues in which both a company like Apple and the world of fashion are keenly interested. And these are all issues that “Manus X Machnica” touches on as it guides its audience through displays of beautiful and interesting garments. But the focus always comes back to making: materials, techniques, process. The exhibit runs through August 14 and is highly recommended for makers of all stripes. 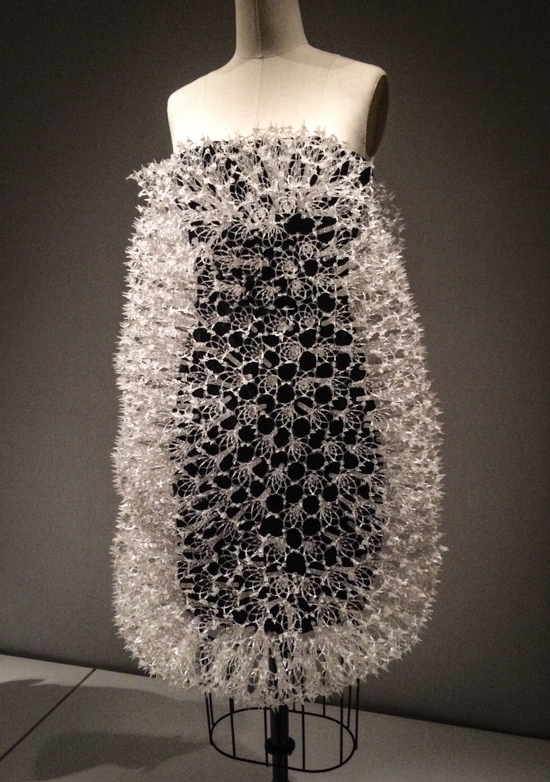 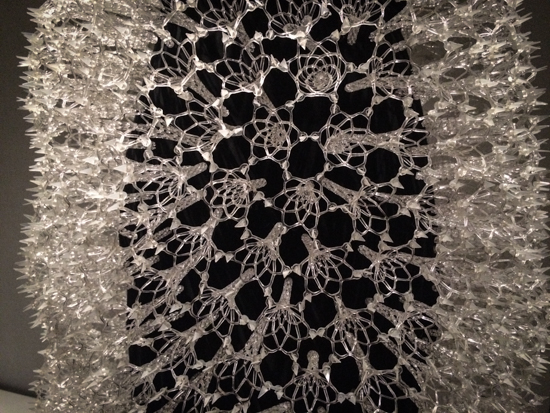 16 thoughts on “A Fashion Exhibit for Makers”