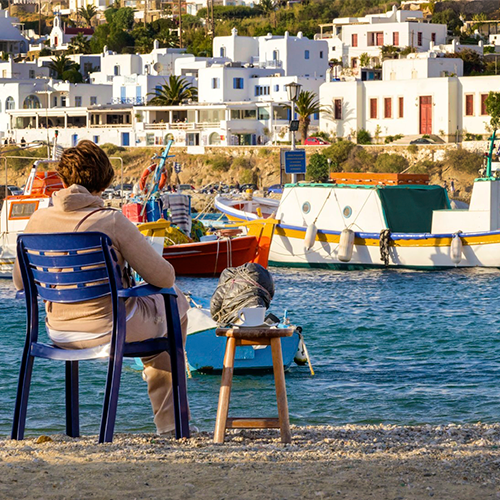 The Greek Philosophy to Programming

Wubby Lets Python Programmers Get Into IoT
by Jim Turley

“The shortest distance between two points is a straight line.” – Archimedes

Life could be worse.

Imagine you’re sitting on the beach on a Greek island, looking across the calm blue waters of the Gulf of Corinth at the Greek mainland, barely a mile away. Olive-studded hills behind you. Dolphin-infested waters ahead.

Your cell phone beeps. It’s your boss calling. You’re wanted at a meeting that afternoon, so you’ll have to close up your laptop and head back to the office, which is located a few hundred yards inland on a street named – wait for it – Nirvana.

You’re a software developer, and your employer is a little startup called Wubby because, well, why not? (Maybe it sounds better in Greek.) And you’re currently working on some red-hot IoT firmware.

Did I mention they’re hiring?

What Wubby does is create enabling software: software that allows other programmers to be more productive. Specifically, Wubby allows IoT programmers to code in Python instead of, say, C or assembler or (Zeus help us) JavaScript. The idea is that Python is easier to learn, easier to debug, and easier to deploy than those other languages. It’s also being taught in a lot of universities these days, so college freshouts are more likely to be productive and hirable if they’re developing in Python. Sure, the language may not have been intended for embedded device code. But that’s what Wubby is for.

The Internet of Things is all about empowerment and widespread democratization (there’s that Greek influence again), so Wubby makes it easier for programmers to contribute. The easier it is to code up a new IoT device, the more people will do it, and the more shiny new gizmos we’ll have.

Like so many things, Wubby (which rhymes with “Robby,” at least if you’re Peloponnesian) was created out of need. Its founders were running a small but successful hardware business making little board-level modules for embedded developers. They discovered, as many hardware companies do, that their customers were stymied by a lack of software. They couldn’t get into production without a long software-development cycle, and that delay hurt business. So Wubby was born as a way to jumpstart software development for the company’s little boards. Before long, the software was more popular than the hardware, and now the hardware business is winding down as Wubby changes it business model.

Wubby is free for the taking – at least, initially. You’re free to download and use Wubby totally without charge as long as you ship fewer than 1000 devices. That encourages experimenters, startups, students, and garage-enclosed entrepreneurs to give Wubby a try without any sort of financial investment. All you need is the right hardware and a knowledge of Python.

After 1000 units, Wubby asks for a single, one-time payment. If your product is more successful than that, the fee grows for the 10,000th unit and then again for the 100,000th one, and so on. It’s not a royalty scheme, per se, because you’re not paying for each individual unit that you ship. It’s more of a stair-stepped post hoc investment, with Wubby taking a bump in payments as your product becomes more successful. Seems fair.

And that hardware? Wubby can theoretically run on just about anything, from an 8-bit MCU to a 64-bit Linux system. But so far, it’s ported to just two families of processors, including Broadcom’s WICED and Nordic Semiconductor’s BLE parts. Wubby says it can do additional hardware ports in a few months; it’s not a complicated process.

Apart from the CPU, Wubby needs about 75 KB of nonvolatile memory and another 8 KB of RAM to run. Your Python-based app will need its own RAM, too, of course. That’s a pretty light memory footprint, and one that many Cortex-M0 devices could easily satisfy. Wubby doesn’t need an underlying operating system, but it’s happy to piggyback on the ones that Broadcom and Nordic provide on their respective hardware. If you’ve got a favorite RTOS, Wubby is happy to add support for it. Their system also runs on bare metal. Once you’ve got the hardware in hand, just download Wubby from the company’s website at wubby.io.

(Random aside: the .io top-level domain belongs to the Chagos Archipelago, part of the British Indian Ocean Territory, whose indigenous residents are called Chagossians. As of the most recent census, there were precisely zero Chagossians living in the area, having all been forcibly relocated in the 1970s.)

As an adjunct to the Wubby Python-interpreter software, the company also offers optional cloud services. (What’s an IoT device without a cloud connection, right?) You can either rent cloud services for an annual fee, or you can buy Wubby’s cloud software and run it on your own hardware. Either way, support for the software/service is free. For now, the company is more interested in generating traction than revenue.

Easing IoT development is a praiseworthy goal, and not everyone has experience with embedded C programming. If Wubby can open the door for Python programmers to get into the business, that’s probably a good thing. It wouldn’t be the first revolutionary idea to come from those islands.

And did I mention they’re hiring?