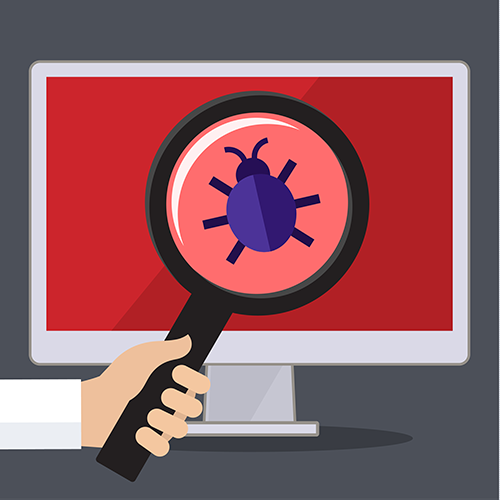 An Environment of Their Own
by Bryon Moyer

Wait… hello? You still there?

OK, whew… I thought you’d already answered, “No” and moved on to something else. Guess I should vet my questions more carefully.

Here’s the deal: HSPICE is 35 years old. I know… I probably should have given you time to pour a drink. I mean… I was running SPICE before there was an HSPICE. (Barely…)

(Takes a few gentle rocks in the chair…)

The question seems to come down to this: how easy is it to analyze and debug the results of the simulation? And I guess that’s where things came up… well, a bit short of what Synopsys wanted.

Option 1 involved a command-line interface. Now… we all know that any badass designer will eschew pretty GUIs as toys, right? If you really know what you’re doing, you’re going to run everything from a dark, inscrutable window, preferably using commands that are as opaque and obscure as possible. Am I right? Your ability to function that way proves that you’re a boss.

Well, except when things get big and complex and you’re competing with companies that are leveraging rather more modern analysis techniques like data mining. I mean, yeah, you can go through 50 pages of printout and instantly spot the problems with the best of them, but… you gotta admit it’s getting harder.

Which means reluctantly considering a GUI. That’s been Option 2. Only… Synopsys didn’t have a GUI to offer. What they could do was integrate with Cadence’s environment.

Yeah, that almost sounds like Wells Fargo wanting to automate their loan process and using Bank of America’s forms cuz they’re already there. Except that those forms have a BofA logo on them… and they don’t necessarily ask for all the info that WF wants…

In the same way, the Cadence integration has limited capabilities – fine for basic stuff, but not so great for sophisticated sleuthing. And any customization requires a proprietary language, SKIL. In order to give designers the features they wanted (and presumably to take back control of their destiny), Synopsys has released their Simulation Analysis Environment (SAE). (Note that this isn’t necessarily a condemnation of Cadence’s features – I honestly haven’t lined them up to compare, but the idea is that the tool is native to Cadence, so they can do more with it than Synopsys can with an integration.)

So Synopsys has assembled their own native environment, and they now own their capabilities. The scope of an environment like this includes, first off, simple access to and control of the simulators – configuration, job management, etc. You know the drill.

In addition, it allows more sophisticated types of analysis, like parameter sweeps, corner evaluation, the use of multiple testbenches, and Monte Carlo simulation. Then there’s data management – making it easier to find a few issues in a sea of non-issues and allowing data mining. Finally, there’s visualization: waveforms dominate here for actual signal analysis, but there is also a need for things like managing the results of multiple simulations to track progress and see what still needs fixing.

In the past, some of these capabilities simply weren’t available. In other cases, like waveform viewing, they had to rely on someone else’s viewer. And not just anyone else’s: a competitor’s. Oh, the shame of it all…

We started out here talking about SPICE, and, indeed, this environment provides entrée into HSPICE, FineSim SPICE, and CustomSim (FastSPICE). But it also gets you into their AMS version of VCS so that the digital and analog parts can be verified together. Because the environment is above all of these simulators, any settings you put in place remain even if you switch simulators. 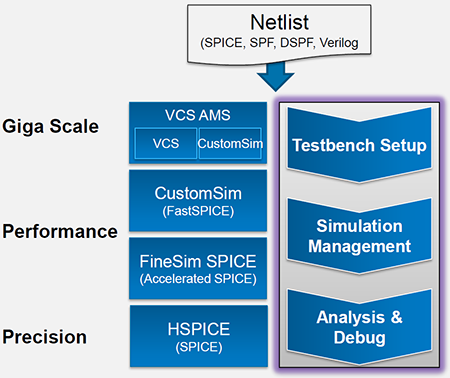 In addition, as you work, it’s busy tracking all your moves. Yeah, I know… put that way, it might sound like Synopsys is taking a page out of Google’s “all your data are belong to us” philosophy, but that’s not what it’s about. It’s recording a script so that you can replay the session in a batch mode without redoing everything by hand. (Probably a few palpitations at Synopsys during this paragraph… No, Synopsys is not snooping your design data.)

When viewing what’s going on during a run, results become visible in real time as tasks finish up, along with color-coding to indicate pass or fail (the usual red/green report thing). And as you are tracking your progress – and trying to decide whether changes to your design have moved you in the right or wrong direction – you can compare results from different runs.

You can also gather statistics and plot multiple parameters as you try to center your design to stay within spec despite variations and environmental conditions. And it wouldn’t be a modern tool if it didn’t let you generate and share reports on the web.

This is being added to their 2016.3 release; there’s no separate charge for it. Just part of the package.

Now, for you (OK… we…) oldsters, I know you value the fact that you can tell your grandkids what it used to be like to run SPICE in the old days. Like, way back when you would buy time from a mainframe service (which is nothing like cloud-based simulation… no, nothing at all). Heck, I still remember being a junior nothing, having been told to run simulations to optimize a circuit, and then seeing my boss’s face when the mainframe usage bill came in. I don’t have grandkids yet, but when I do, I know they’re going to be asking for that story over and over.

For the rest of you whippersnappers, you have no idea how good you got it these days…

One thought on “Synopsys and SPICE Go Native”