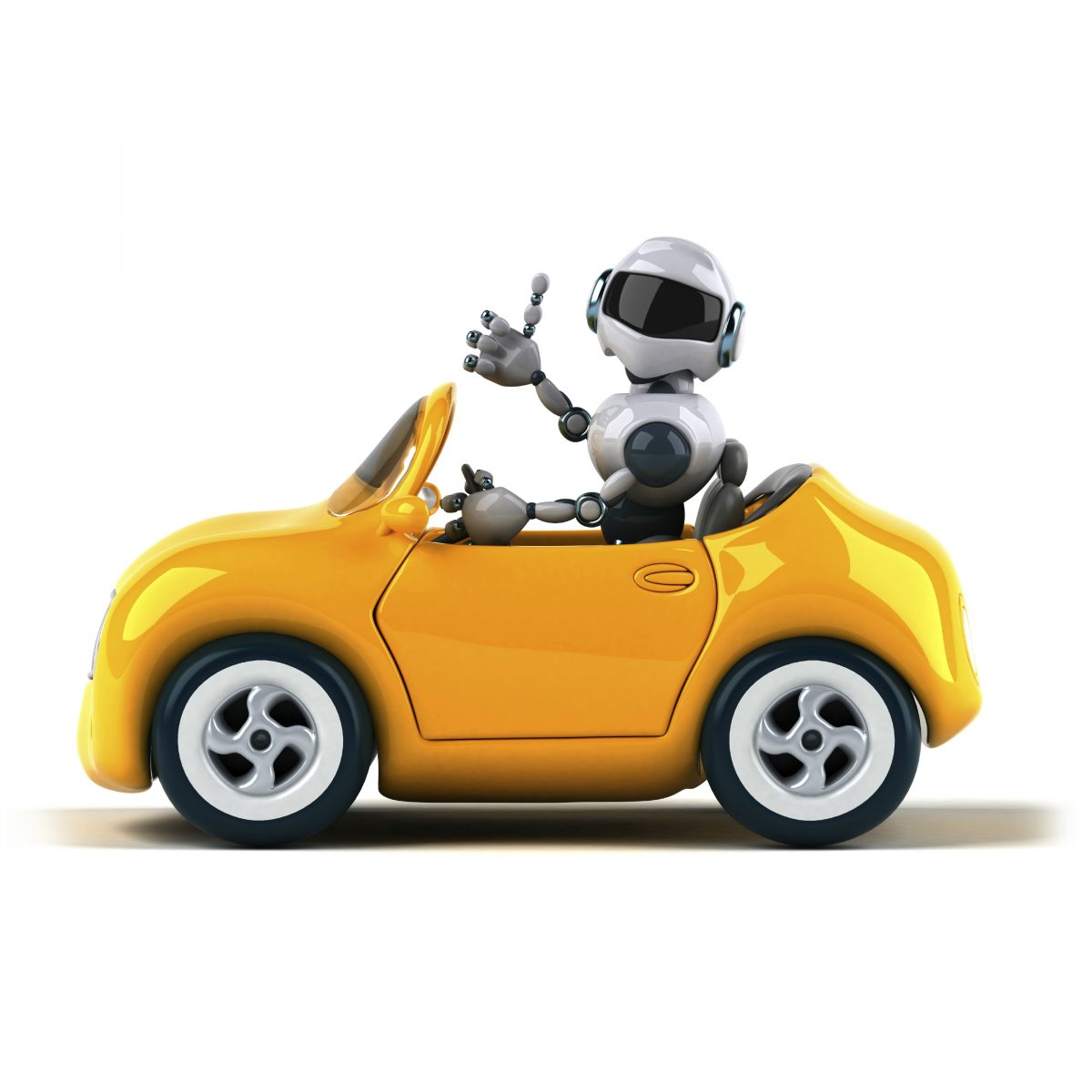 Self-Driving Cars Get Closer to Human Drivers, but in a Good Way
by Jim Turley

“If I get killed here, will my life insurance cough up money?” – A. J. Baime

This is a story about Thanksgiving. Skip ahead if you’ve had enough.

In every science fiction robot movie, there’s always a scene where our hero has to learn to trust the robot. He’s initially skeptical, of course, and probably has been bad-mouthing said robot throughout the first half of the film. But at some critical juncture, usually in a time of peril, our biological protagonist puts his fate in the hands (end effectors?) of his cybernetic sidekick. The robot comes through like a champ and in the process becomes a little more “human.” Roll credits.

That hackneyed, worn-out story line is playing out in real life in many parts of our industry, most notably in the area of self-driving cars. I’ll be honest: we’re a lot closer to having autonomous vehicles than I thought we would be. I’ve done enough robotics development – and enough driving – to know that both are really hard. In my not-so-amateur opinion, I figured that mixing the two was going to be something for the next generation of engineers, not the ones I’d be sharing the road with during my lifetime. Surprise!

The rude awakening came when I heard about a five-way experiment involving Audi, professional racecar driver and Indy 500 almost-winner J. R. Hildebrand, the racetrack at Sonoma (née Sears Point) California, automotive journalist A.J. Baime, and Audi’s prototype robot driver, nicknamed Robby (because of course it is). In brief, Audi took its car and robot to the racetrack to see if it could out-race a professional human driver. The journalist was there for comic relief (because of course he was).

Spoiler alert: Hildebrand beat Robby, but only by a small margin.

Unlike most robot movies, Robby is pretty ugly. He’s a robot in only the most technical sense, in that he’s an electromechanical device that responds in real-time to stimuli and has some learning capability. In fact, any electrical engineer looking closely at Robby would likely recognize some of his/its components. There’s a pair of extended-ATX motherboards with a lot of PCIe Ethernet and data-acquisition cards plugged in. These get cabled to a couple of TTTech Connexion data loggers, some small HP routers, and a bunch of rack-mounted I/O cards. It kind of dilutes the magic when you can point and say, “Hey, I used that same actuator in my last dishwasher design!”

The whole rig is bolted and zip-tied into the car’s trunk, not perched up front in the driver’s seat. Which leaves the car eerily empty, even as the steering wheel turns and the pedals move. Any human passengers are just that: meat bags along for the ride. In a fast car. On a racetrack.

Granted, this was a controlled experiment. Audi didn’t just turn the car loose and say, “go for it!” They trained Robby extensively, first with GPS coordinates of the track, then with two drive-alongs to record the left and right boundaries of the asphalt. From that, Robby knew where the track went left or right, how wide it was, and where the humps, dips, and camber changes were. Sonoma is a hilly racecourse, so vertical elevation plays a bit part in driving it successfully.

Nevertheless, the droid did good. Its best time was 2:02.50, or just over two minutes around the twisty course, with a top speed on the start/finish straight of 114 MPH. Not bad for a street car. (For comparison, the absolute lap record is 1:21, or about 50% quicker, set in a gonzo multimillion-dollar Le Mans prototype racecar-cum-spaceship with ground effects, wings, sticky tires, and a massive engine.)

But like John Henry, steel-driving man Hildebrand beat the machine, turning in a lap time of 1:53.24 – about 8% quicker than his trunk-mounted rival. His top speed was also a bit faster, and, according to observers, he just drove “better.” Robby’s path around the track was geometrically correct, connecting the corners with straight lines and following the shortest possible path. Short, but not quick. Racers like Hildebrand know that the fastest path between two points is a curve, not a straight line. The point, as it were, is to minimize lateral acceleration and maximize tire grip, so smooth curves are better than grid-perfect connect-the-dots. Age and treachery beat out youthful enthusiasm once again.

Still, the Audi engineers were pleased with the results, as well they should be. The car drove around the freakin’ track (almost) all by itself!  Other versions of Robby have successfully navigated city streets and open highways, even making the 550-mile trip from the California coast to Las Vegas unaided. (Granted, if you’ve made that drive, you know it’s mostly unremarkable desert.)

Audi certainly isn’t alone in this endeavor. Nearly every automaker worth its salt is beavering away on self-driving technology. They all say it’s for safety; that an autonomous car doesn’t fall asleep at the wheel, doesn’t forget to check its blind spot, and doesn’t look down to retrieve a lost pretzel under the seat. All good points, but eliminating those risks (and a thousand other human foibles) doesn’t mean that we’re suddenly driving risk-free. Only that we’ve replaced the old, familiar risks with new, unfamiliar ones. But perhaps more manageable risks, and fewer of them. We’ll see.

Given how lousy some programmers are at performing even rudimentary bug-checking, I worry over the kinds of glitches we’re going to see in future. Back in the 1980s, all sorts of urban myths about cruise control would circulate, usually involving some friend of a friend who mistook it for an autopilot and subsequently ran off the road, hah-hah. What sort of, “Sorry, officer, I didn’t know it would do that” stories are we going to hear in the coming years?

On the other hand, I’m envious of the engineers and programmers who are working on autonomous vehicles. That’s pretty cool work, combining robotics, machine learning, real-time control, safety, and user interfaces. Almost everything is new and untried. This is one of those inflection points where new vendors (e.g., Google or Apple) could potentially make a mark. Or where the established players can reassert themselves. Maybe Peugeot or Packard will be the big winner in the next decade. I could see riding in the back of an autonomous Duesenberg. Home, Robby.