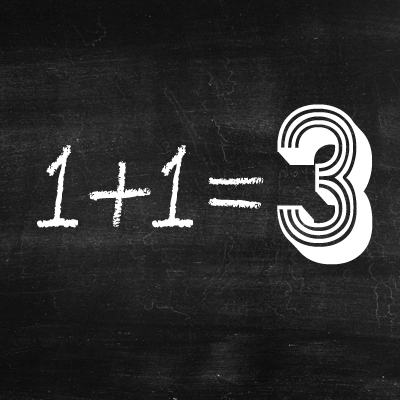 Up to 5x More Compelling
by Kevin Morris

Hello students, please take a seat. I’d like to welcome you to Marketing Mathematics 201. That’s right, compared with other “intro” classes, we have almost 2X the oomph, giving you an estimated 120% more learning with 3/7ths less homework energy expenditure.

If you’ll please look at your syllabus (which, by the way, is 28% shorter than last year’s, while packing in up to 500% more aggregated knowledge) you’ll see that we will have only four effective exams in the course this term (distributed across five discrete tests), reducing exam stress by an estimated 72 thermal units, while simultaneously increasing the accuracy of accomplishment measurement by a staggering 12 effective resolution bits.

Now, just a note before we begin. If any of you are on the “future FPGA marketing” career path, you’re in the wrong room. You’ll need to attend “Advanced Xtreme Marketing Mathematics 767+” on the top floor of the tower in the administrative building.

Let’s get started. First, open your textbooks to the latest Xilinx product tables.

You’ll notice there on the top line that Xilinx device capacity is now quoted in something called “System Logic Cells.” Is that a new one for you? Well, it should be, because until this year “System Logic Cells” was a concept that completely did not exist in the universe.

We’ll use this as an example to highlight Marketing Mathematics Principle #1 (MMP1):

“Make up your own units”

That’s right. If the competitor’s car has 500 horsepower and yours only has 450, just reach into the old toolbox and pull out trusty-old MMP1. Presto! Your engine is now cranking out a remarkable “up to 575 Peak Units of Mule Strength (PUMS).” Your 575 PUMS will blow away their puny 500 HP any day of the week!

So, back to our example, what is a Xilinx “System Logic Cell” anyway?

It appears to be a new unit (defined in 2015 using MMP1) that is equal to “Just enough 6-input LUTs so that our biggest device sounds larger than Altera’s biggest device.” Or, specifically, 2.18 times the number of 6-input LUTs on the chip.

Prior to the invention of the “System Logic Cell”, Xilinx product tables referred simply to the “logic cell” which was equal to 1.75 times the number of 6-input LUTs.

If you look on page 2 of your textbook at the “previous version of the Xilinx product tables,” you’ll see that the Xilinx UltraScale XCVU065 had about 650K of these old “logic cells” (which is presumably why it’s called XCVU065 in the first place).

Then, If you look into the details, you’ll then see that the actual number of logic cells reported was 626,640 which, as any marketer worth their salt knows, can be adjusted from 626,640 to 650,000 using Marketing Mathematics Principle #2 (MMP2):

“Always Round Up. A LOT”

However, if you look back at the NEW Xilinx product tables, you’ll find that same old XCVU065 650K device now expanded into a 783K device, thanks to the magic of “System Logic Cells”. That’s right, a 25% increase in claimed capacity with no changes whatsoever to the silicon or the design software. Just Marketing Math Magic that would make the Russian Olympic Team proud.

Xilinx’s largest current device, the XCVU440, which we reviewed in this article back in 2013, prompted this from us:

Well, 4.4 million was certainly a LOT of cells, wasn’t it?

At least, until archrival Altera came along and said that their upcoming Stratix 10 GX/SX devices would have up to 5.5 million logic cells! (The details say it has 5,510,000 “logic elements,” so apparently Altera’s Marketing Mathematicians missed out on MMP2’s “Round UP” principle. Anyway, we digress.)

Apparently Xilinx’s answer to “what to do” was to invent the new “System Logic Cell,” bumping the old multiplier from 1.75 up to a more competitive 2.18. Now, the venerable XCVU440 magically ascends from a previously impressive 4.4 million cells to an Altera-beating 5.5 million cells (also featuring an MMP2-eschewing “round down” from a detailed spec of 5,541,000, by the way) with nothing but a wave of the Marketing Mathematics Magic Wand.

Oh no. Hang on a minute there, super-shamers. There’s more to this story than meets the eye.

Xilinx blew it – not by inflating their product data. Heck, everybody does that. Their big mistake was being so obvious about it and temporarily forgetting Marketing Mathematics Principle #3:

“The First Liar Doesn’t Have a Chance”

That’s right. Never go first in a game of exaggeration. If you don’t understand why, go back to Game Theory 101. We can’t help you here.

You see, it would be easy to fault Xilinx for bumping their claimed capacity from 4.4 million logic cells to 5.5 million system logic cells for the VU440. But really, they had been letting Altera out-exaggerate them by too much for too long.

For the record, the actual number of 6-input LUTs in the respective Xilinx and Altera devices is:

Altera was already using a whopping 2.95 conversion factor (from 6-input LUTs to “logic elements”). Xilinx apparently simply bumped theirs up “just enough” from 1.75 to 2.18 to make their biggest device “look” bigger. And, clearly, they exercised restraint, because if you measure capacity in actual, real, physical 6-input LUT structures that might possibly be found on the chip, they appear to have significantly more.

Altera, by the way, has a nice footnote in their product table:

“LE counts valid in comparing across Altera devices, and are conservative vs. competing FPGAs.”

We’re not quite sure about the definition of “conservative” in that sentence.

Of course, neither Xilinx nor Altera has anything on their chips actually resembling the “logic elements” or “logic cells” that are used on the product tables. These are all fabricated numbers intended to give some kind of relative capacity compared with years-old devices that used 4-input look-up tables (LUT4s). When both companies made the switch from 4-input LUTs to 6-input LUTs, they couldn’t bear the thought of quoting a number of “cells” or “elements” that might look smaller than their previous generation, so they began giving capacities in mathed-up numbers intended to maintain consistency at the expense of reality.

And, that gets us to Marketing Mathematics Principle #4, which we’ll discuss tomorrow:

Well, we’re out of time. This concludes our Marketing Mathematics lesson for today. If you have any questions or comments, please leave them in the box below.