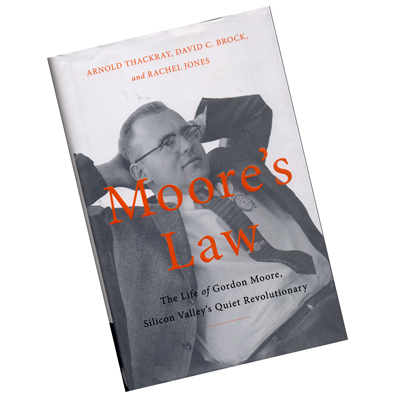 A review of "Moore's Law: the Life of Gordon Moore"
by Dick Selwood

More years ago than I want to think about, I expressed interest in a PR job at Intel. In a preliminary meeting, things were going well until I was asked how I dealt with confrontational situations. My reply, that I worked hard beforehand to make sure that the need for confrontation didn’t arise, was clearly the wrong answer, and so – probably just as well – I never worked for Intel. After reading Moore’s Law: the life of Gordon Moore, Silicon Valley’s quiet revolutionary, I now know why this was an important question.

Gordon Moore is the only widely known name from the founding fathers of the silicon age. This is in the main because of Moore’s Law, which is misunderstood and misquoted daily. And, unlike many of the others of the founding fathers, he is still alive and the company he founded is still a major (if not the major) player. So a biography of a living legend should be more than welcome.

Gordon Moore, unlike most of the other players in Silicon Valley, is a California native, whose grandfather had arrived in the state in the 1840s. Moore himself was born in 1929 in the tiny community of Pescadero, a few miles inland from the pacific coast. He grew up in Redwood City, where he first got involved in chemistry by making explosives. He than studied chemistry at Berkeley and earned his PhD at Caltech in Pasadena. In 1950, on the day before he moved to Pasadena, he married Betty Whittaker, who, after a short period of employment outside the home, took on the role of the classic housewife that she still occupies.

After Caltech, Moore worked as a post-doc at the Applied Physics Laboratory, a research lab run by Johns Hopkins University for the US Navy in Maryland, just outside Washington. While working there, he was approached in 1955 by William Shockley to join his new transistor company in Mountain View, just a few miles from Moore’s family in Redwood City. As is well known, Shockley was not a great manager, and, eventually, in 1957, eight key players, including Moore, left. The “traitorous eight” were backed by Fairchild Camera and Instrument to create Fairchild Semiconductor.  While at Fairchild, Moore wrote an article for Electronics, in which he predicted that the number of components in an integrated circuit would double every year. Carver Mead, an influential figure in electronics research and education, some years later called this “Moore’s Law”, and it has achieved considerable fame.

A number of Fairchild employees left to found their own companies (the Fairchildren), and Moore, along with Robert Noyce, another of the traitorous eight, and Andy Grove, in 1968 formed their own company, Intel. Intel would specialise in the new technology of integrated circuits, starting with standard memory chips for computers, to replace the expensive magnetic cores then in use. Effectively, Moore worked on developing the process and getting it into production, Noyce carried out the external-facing activities, and Grove managed things.

From then until 1997, when he became chairman emeritus, the story of Gordon Moore and the story of Intel are one and the same. A smoothed graph of revenue against time would show Intel undertaking steady and relentless growth to today’s $55.9 billion turnover. However the detailed graph would show that the dramatic ups and downs that have characterised the semiconductor industry didn’t spare Intel, and that the company also managed to create a few crises of its own.

Through all of this, Moore would keep his carefully constructed routine for many years: driving from home to work, where he had a standard cube, sharing the lunch his secretary (who worked for him for nearly a quarter of a century) brought from the staff canteen, driving home to a meal cooked by Betty, rinsing the dishes and loading the dishwasher (when they finally got around to buying one), and then retiring to his office to work some more. At the time of starting Intel, Moore was, by many standards, a rich man. (He, Noyce and Grove, each invested about $250,000.) Within a few years, he was a very wealthy man, but – unlike his rivals and colleagues – he didn’t go on exotic holidays and buy new Rolls Royces. He still sees no reason to buy new things until the old ones are worn out. This applies clothes, cars, and domestic appliances.

One thing that emerges strongly (in fact repetitively) from the book is that Moore is terrible on people relations. He gives little away in conversation and avoids conflict. A quote from Steve McCormick, who was, for a while, the president of the Moore family’s massive charitable foundation, sums up many people’s views: “Gordon is a hard person to connect with. It is hard to get any real feedback; it was difficult for me to know where he stood.” One person who could read Gordon was Andy Grove, who was, in some ways, the emotional opposite of Moore. Where Moore avoided confrontation, Grove relished it and initiated showdowns. The authors say that “macho and combative posturing often preceded ‘rational judgments’”. This macho attitude set the pattern for management further down the company, including sales and marketing, which didn’t always produce the best results in the longer term.

The book is stuffed with Moore’s recollections of the crises Intel faced and how they were overcome, including early issues with processing, the occasional collapse of the memory market, the arrival of the Japanese as customers and competitors and their dedication to quality, the microprocessor wars – all these are well worth reading. But the war story that sums up for me the essence of Intel is that of the Pentium bug.

Intel’s family of microprocessors had gone through generations from the first 4004 and 8080 through the 16-bit 8086, the 32 bit ‘286 and ‘386 and then the Pentium family. In 1994 the Pentium P5 family was discovered to have a bug when carrying out certain floating-point operations. Intel were informed of the bug, made a mask change and carried on. Grove, who was by this time CEO to Moore’s Chairman, had the view that this was a merely technical issue that would have no impact on most users. (One estimate was that it was a problem in only 1 in 9 billion floating point divides.)  When the problem became public, with the news, ironically, spread rapidly though the Internet that Intel’s products had done much to create, Grove simply dug his heels in. Moore’s reaction was, “Oh God, we’ve got to replace all those things.” But he didn’t overrule Grove, who backed off only when IBM announced it was not shipping any PCs with Pentium processors.  From an engineering point of view, Grove was right, but the consumers and business users, who by this time were beginning to form the bulk of the end users of Intel’s processors, felt differently.

In some of the other crises, Moore comes out better. Even when market changes meant laying off people, as in 1974 when the company laid off 30% of the work force, he continued to invest in process development, product development and manufacturing facilities. After a debacle when Intel bought a watch company, he firmly insisted that the company stay out of making PCs and other consumer products.

He was capable of supporting ruthless acts. In two incidents in the book, he was complicit in arbitrarily tearing up agreements with second-source companies when they were no longer in the company’s interests.

During his many years as CEO and then chairman, and finally chairman emeritus, Moore moulded Intel. It made him a billionaire, it made investors rich, and, because of his policy of including share options as a part of the compensation package for employees, made money for many of them as well.

Moore was reluctant to retire. After he stepped down as chairman and became chairman emeritus, he still came into his cubicle – usually three days a week. After passing the mandatory board retirement age, he attended board meetings as an advisor. This came to a sad end in 2006, when he was asked to leave the meeting during a session on a sensitive topic. It took nearly a year before the company sent him the contents of his cube, including trophies of the company’s milestone successes.

By this time he had already begun to develop the charitable activities that became the Gordon and Betty Moore Foundation. As a very rich man (according to Forbes he was worth $26 billion in 2000), with none of the hobbies of very rich men, if he did nothing with his money it would just continue to grow. He began by giving grants to Caltech (one grant, of $600 million, is the largest ever given to a university) and to Berkeley. This activity was formalised by creating the foundation, which now focuses on environmental conservation, patient care, science, and the San Francisco bay area.

The Moore that comes out of the book is not immediately attractive, but he is not unfamiliar to those who have worked in engineering. As far as possible, he recorded, measured, and calculated. This is great for trying to invent or improve a semiconductor manufacturing process, but not always so successful in working with people.

This story is told in a big book (530 pages), inside which is a smaller and better book desperate to get out.  It was slow to get started, and large chunks of the first few chapters could have been dropped (even though they are, in themselves, interesting – on the early days of the San Jose area when Silicon Valley was called “The Valley of Heart’s Content”). And this is a constant issue: once one of the authors had found a fact about something, then it seems it had to be crammed in – somewhere. It may be because the authors had access to Gordon Moore himself, his wife, Betty, their children, and a raft of other people who knew or had worked with him. The acknowledgement list at the end is very lengthy.

Another irritation is the authors’ insistence on, at the end of a section of a chapter, writing a summary phrase like, “This experience, though he didn’t realise it at the time, would stand him in good stead in the years to come.” What the book needed was a strong editor, who would also have curbed the author’s semi-repetitions, making the same point, in slightly different language, at several places in the book.

A final grouse from this reader is that the book misses much of Intel outside the US. This is striking because as early as 1986, Bill Davidow, who had been senior VP of sales and marketing and then founded Mohr Davidow Ventures, a venture capital company, was writing in Marketing High Technology, “Be international or fail”, drawing on his experience with Intel. Under Bill and his successors, Intel has worked internationally – it  hasn’t just sold internationally.

Even with these grouses, it is worth making the effort to wade through it, if you are in the least interested in how the structure of today’s semiconductor business was formed – and, in particular, how Intel grew to its dominant position.