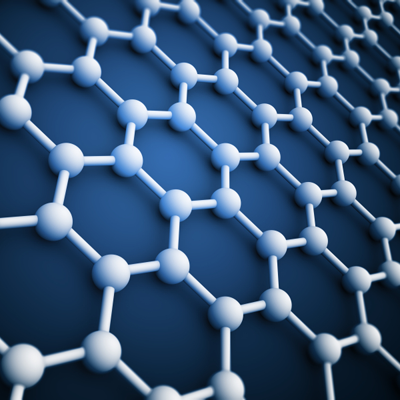 Is Graphene the Wonder Material?
by Dick Selwood

You don’t need an expensive lab and a ton of equipment to win a Nobel Prize. How about a pencil and a reel of Sellotape (the British alternative to Scotch Tape) and standing your thinking on its head? That is how Andre Geim and Kostya Novoselov, two Russian-born researchers at The University of Manchester, first extracted graphene.

These different characteristics of carbon have attracted much interest in materials research. Carbon fibre composites – long threads of carbon bonded in a polymer – are strong and lightweight, making them valuable for applications ranging from handles for tennis racket to panels for aircraft and vehicles.

Fullerenes are regular structures of carbon, as are hollow spheres (buckyballs), tubes (carbon nano-tubes), and others. These were discovered in the 1980s and ’90s and possess very interesting characteristics, with a long list of potential applications, but so far very few real world ones. (Although Jim Turley has found one – see Astronauts, Architects, and Memory Chips: Nantero’s Carbon-Nanotube Memory Challenges Flash.)

Which brings us back to graphene. While graphene has been known to exist since at least 1947, it had been very difficult to isolate. Growing it on other crystal surfaces had proven difficult, since the graphene would try to interact with the surface it was growing on. Physically separating the graphite was also explored, and one approach was to use sticky tape to peel away graphite, exposing a surface layer of graphene on the graphite.

In Manchester University in 2004, at a “Friday night experiments” session, a regular event where Andre Geim and Kostya Novoselov “played” in areas that where not directly linked to their main area of work, they realised that the sticky tape they had been using and discarding had a thin layer of carbon: they were throwing away the very graphene that they had been looking for.

From this starting point, the team working with Geim and Novoselov began serious investigation into the properties of graphene and developed other techniques for isolating it. Since then, the original pair have been jointly awarded the Nobel Prize for Physics, been knighted, and, perhaps more importantly, have been given effectively two expensive labs and several tons of equipment: The National Graphene Institute (NGI), officially opened in March but really still being facilitised, will continue the basic work and look at different application areas, while the Graphene Engineering Innovation Centre (pronounced GEEK) will open in 2017 and look at moving the research into commercial application.

So why is graphene so important?

NGI claims that graphene has the following properties:

These are only the starting points.

I recently visited the NGI and one of the university spin-offs, 2-DTech, and learned a lot about the current position and the future of graphene.

2-DTech has two rooms in an incubator block on the Manchester University campus – one a crowded office, the other a larger but equally crowded lab. The company is currently working with a number of other companies to make graphene commercially viable. It provides consultancy – working with people to see how graphene can be used to create new products or improve existing ones – and also provides sample quantities of graphene, but has plans to scale up to larger volumes. It is working on several methods for creating graphene, including mechanical exfoliation, knocking platelets off lumps of graphite, and Chemical Vapour Deposition (CVD).

CVD flows a carbon containing gas over a copper substrate at a high temperature, producing a layer of graphene on the surface of the copper. The graphene is then attached to a polymer bearer and the copper is etched away. This produces sheets of graphene for applications such as solar photovoltaics. This is working well on a small scale, but scaling, which is also being worked on by other companies and research units, is proving challenging.

The more immediately exciting area is mechanical exfoliation, where a fairly ordinary rolling mill produces platelets of graphene, which are then held in a liquid suspension. This process can be easily scaled to produce large quantities of graphene. This makes possible large-scale commercial use. The suspension of platelets can be used in ink jet printers to draw circuits and to create circuit elements. It can also be used with polymers and some metals to create light and strong materials. An addition of only 3%-4% to polypropylene completely changes its mechanical properties, making it very much stronger. A polymer/graphene mixture can be a feedstock for 3D printing. (I like the idea of 2D materials being assembled in 3D structures.) An issue with using the platelets that you have so carefully separated is that, as they dry out of a suspension, the platelets are prone to try to stick themselves back together.

2-DTech is involved in a number of projects that they cannot, for obvious reasons, talk about – but two are in the public domain. In one case they are working to coat copper with graphene to stop copper heat sinks from oxidising, and so maintaining their efficiency. In another project they are working on creating an alternative to silicon for photovoltaic cells – if you shine a light on graphene, it generates electricity. A third project is creating dental prostheses. The teeth are normally embedded in a base of PEEK (Polyether ether ketone). Adding graphene to the PEEK provides greater strength, making the PEEK behave more like a bone.

About five minutes’ walk across the campus is the NGI. A brand new, purpose-designed building with the clean rooms, labs, offices and meeting spaces you would expect, it is mostly empty as facilities are being completed, but there is an air of anticipation. Far bigger and far more lavishly funded than 2-DTech, the NGI is planning to spread across a wide range of things as it begins to gather momentum.

As part of the “show a visitor around” package, the NGI has a number of examples of graphene that are either already in use, or are on the verge of being so. We have already mentioned coating copper to prevent corrosion. One demo is a conventional house brick of fired clay of which half of one face has been coated with graphene. If you spray water onto the brick it rolls off the graphene, but settles on the non-coated section and soaks in.

Another demonstration is diametrically different. While graphene rejects water, layers of graphene oxide act as a filter, allowing water through but rejecting other substances. The demo showed a vessel of acetone blocked by a graphene membrane. Water added to the vessel merely flows through. This has clear applications for desalination and other water purification projects. The same membrane will trap radio-nuclides, making it a valuable tool for purifying nuclear waste.

The following examples are drawn mainly from the NGI examples, but also from a broader pool:

Graphene is finding a home in energy storage and conversion. It is being used as a catalyst in fuel cells and providing improved performance in super-caps, and it is replacing graphite as the anode in lithium ion batteries. It is also improving the efficiency of LED lighting.

Early consumer products using graphene include smart phones from Chinese manufacturers Glapad and AWIT, which have a graphene touchscreen. The companies claim that the screen transmits more light with better colours, reducing the energy needed to drive the screen and extending battery life.

I have already mentioned printing circuits and elements on flexible substrates. One area that is particularly interesting is low-cost, high-efficiency RF antennae, providing a route to really low-cost RFID labels.

The large surface area of graphene makes it potentially very useful as a sensor for bio-sensing. Ideas floated have included graphene tattoos as sensors for human functions, bio-marking sensors for proteins and DNA, and safety sensors for hazardous gases and other atmospheric issues. It can also be an ultra-sensitive pressure sensor and a magnetic sensor.

We have already mentioned composites. When platelets in suspension become more widely available, it will be possible to form composites through injection moulding, a process not available for carbon fibres. Another area that is promising is graphene coating of textiles, such as cotton and wool, to make them water resistant (remember the house brick?).

Graphene also looks promising as a coating material for medical implant devices. Unlike the metals and polymers that are in use today, graphene is tolerated by and doesn’t react with the human body.

Other materials are being explored for their 2D behaviour. For example MoS2, which is extremely stable and non-reactive, can be used to build switchable transistors and very sensitive photo-detectors; BiSr2CaCu2Ox holds promise for superconductivity; boron nitride creates a hexagonal nano-mesh that traps molecules and metallic clusters, and this is being explored for spintronics and quantum computing; and NbSe2 can also be superconducting, but it also offers very interesting prospects for 2D semiconductors.

In fact, it is probably accurate to say that scientists around the world are looking at almost everything in the lab to see what happens when you push it into a two-dimensional form.

Just as I was writing this, an announcement from Nankai University in China said that when using a laser to cut a graphene sponge, the sponge moved. The sponge was several centimetres (around an inch) across. The team have since pushed pieces of sponge as much as 40 cm in a vacuum with a laser and have also moved the sponge with focused sunlight. It is very early days, but the movement is too great to be the solar sail effect of photons imparting momentum, and the Chinese team has also ruled out the idea that the graphene was being vaporised by the laser and spitting out atoms. Instead they think it might be that the laser is causing the sponge to build up a charge of electrons until the point where electrons are released. They have seen current flowing away from the graphene, but they don’t know why the electrons are released in a particular direction. The news coverage has been all about how this effect could lead to no-fuel space vehicles, which would be propelled by electrons kicked out of large graphene sponges by sunlight.

Other news in the last few days has included:

MIT researchers have tested lab-scale roll-to-roll CVD production of graphene. If it can be scaled, and, of course, the announcement was confident it could, this opens the door for very high volume manufacturing of graphene sheets. The graphene quality is dependent on the speed through the process: slow speed produces the best quality, but higher speeds produce graphene suitable for applications like heating sheets.

MIT has also announced that coating copper steam condenser tubes for power stations in a layer of graphene improves their performance by a factor of four, by decreasing the tendency of condensing water to become a sheet, and instead becoming water droplets which are pulled off the tubes by gravity. This has, according to MIT, the potential to improve power station performance by 2 or 3 percent – a colossal worldwide saving!

Norwegian researchers have found that coating catheters with graphene, rather than silver, improves the delivery of a family of chemotherapy drugs used in cancer treatment.

Skeleton Technologies, the German-Estonian manufacturer of ultracapacitors, has raised €9.8 million to ramp production of graphene-based ultracapacitors.

Now these are all (except for Xefro) research projects, but they were announced over a period of one week. A quick check shows any other week this year would have produced almost as many announcements. The sheer scale of the work on graphene around the world is staggering: China in particular is chasing graphene hard. It does look as though it is likely to meet its promises.