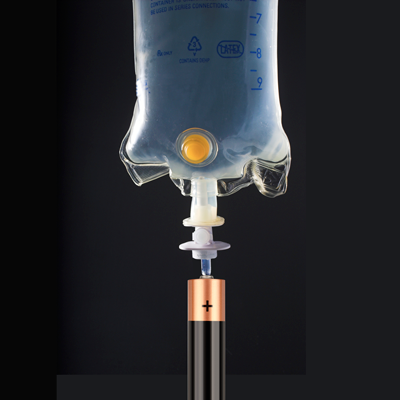 Better Batteries Without the Fireworks
by Bryon Moyer

This is yet another tale from the long saga of the Quest to Build a Better Battery. We’re all waiting for the day when we can unplug everything and yet never have our batteries run dry, so, for the time being, battery technology is cool.

This tale is very specific. It’s about building a lithium-based battery with a lithium anode. Why is that a goal? Well, it always was the goal for the best performing lithium battery, but inconvenient problems like potential fires have gotten in the way. So we’ve used carbon-based anodes as a next best thing.

But according to a team from… well, from several institutions (the Joint Center for Energy Storage Research, the Pacific Northwest National Lab, and the US Army Research Lab), batteries built this way may be reaching their potential energy density limit. And so figuring out how to get a lithium anode working would extend the energy density roadmap.

This tale involves two main agents in addition to the principal anode character. The first is a solvent; the second is a salt that’s dissolved into the solvent. Together they make the electrolyte that ferries ions around as the battery is charged and discharged. The salt should contain lithium so that, when charging and discharging, the Li+ ions in the salt solution are plated onto or stripped off of the anode, depending on whether it’s charging or discharging.

The problem is that, especially with organic solvents, you’ve got some complicated chemistry going on – or at least the potential for it – in addition to this simple transfer of lithium ions. And lithium apparently plays well with only a few solvents. As a result, experiments with different alternatives have tended to bump up against one roadblock or another.

The biggest roadblocks are:

Propylene carbonate (PC) is a typical solvent, and LiPF6 has been a standard salt for the lithium batteries that we use today. But, together with a lithium anode, they end up creating dendrite problems. There’s another family of ether solvents, the “glymes,” that cause fewer dendrite issues, but they still degrade over repeated cycling.

An important point here is the concentration of salt in solvent as various alternative substances have been tried. Because current density peaks at 1 M* concentration, this is the concentration that’s typically been used for trying out different configurations. Some prior experiments with higher concentrations showed promise, although none of them was able to achieve dendrite-free operation with stable Coulombic efficiency (CE – essentially, how many of the ions result in stored charge, or at least that’s this poor-man’s explanation) at high currents over multiple charging cycles.

The work done by this team picked up on these leads and, for the salt, used lithium bis(fluorosulfonyl)imide – LiN(SO2F)2, or, more simply stated, LiFSI. They dissolved it in dimethoxane, or DME – an ether solvent or glyme. Together you’ll see them referred to as LiFSI-DME. And they played with the concentrations, working up from the typical 1 M concentration up to 5 M.

What they found were a couple of interesting things.

2- and 3-M runs behaved somewhere between 1 M and 4 M, and so were not as effective. 5 M exhibited lower conductivity, so 4 M appeared to be an optimum.

According to the team’s analysis, what seems to be happening is a result of the choice of materials and the higher concentration. DME is less likely to react with Li than PC, so this reduces the rate of side reactions. There’s also weaker interaction between Li+ and FSI– in solution, making the Li+ more broadly available for deposition. LiFSI is also highly soluble, making it less likely to crystalize.

Finally, because there’s more salt in concentration, there’s more Li+ available for plating, and, as it plates, there’s a higher concentration gradient from the just-depleted electrolyte near the electrode and the rest of the electrolyte, stimulating a more vigorous flow of ions towards the lithium anode. In addition, less solvent per volume means less solvent for side reactions. And, in fact, the SEI appears to have more inorganics in it, making it more conductive.

The best part is the fact that, once the SEI is established, it seems to seal off the lithium, making it unavailable for further corrosion. SEMs indicate no porosity or cracks. And so the SEI doesn’t continue to grow; once established, it remains at a stable thickness. Because it’s conductive, this means that the resistance remains low as the battery is cycled.

In the final analysis, the high concentration of lithium ions supports high currents, and the well-behaved SEI layer raises the CE to just over 98%. They were able to cycle it over 6000 times at 10 mA/cm2. They see this as an excellent platform for further battery development.

*I felt kind of stupid not being sure what “M” specifically meant. I knew it was related to concentration, probably having something to do with moles (which, once I got past college chemistry, has stronger association with rodents and skin formations), but that wasn’t enough. I checked around and decided that here we’re dealing with molarity, which is moles/liter. That’s as contrasted with molality, which is moles/kilogram. This distinction in terminology is probably problematic for folks whose native languages don’t discriminate well between the phonetic liquids…

10 thoughts on “A Dendrite-Free Lithium Anode”