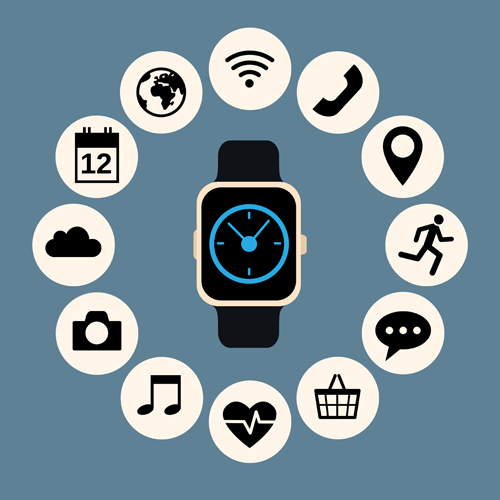 A Dialog with Imagination

Two Companies Want You to Wear Their Chips
by Jim Turley

Ooh, trends. Gotta love ’em. There are trends in music, trends in fashion, trends in politics, trends in economic theory, and trends in our good ol’ electronics business. Fortunately for us, almost all of the trends in the latter category are of the good, healthy, up-and-to-the-right, variety. Chips get faster, power efficiency improves, and software gets better. Well, two out of three.

Another trend is shrinkage, of course. On this, the 50th anniversary of Moore’s Law, we’re still seeing our devices get smaller and smaller, to the point that we’re now wearing them. A computer that once took up an entire room in our grandparents’ time now fits on a wrist, in a pocket, or behind an ear.

The hot trend now in product development is wearable technology: computers and sensors we strap on ourselves and take everywhere because we forget we’re even carrying them. The whole sub-genre is so new that the word “wearables” fails most spellcheckers. (That’s okay; “internet” and “transistor” took a while to catch on, too.) And so, we’re seeing a whole slew of new wearable technologies and products from every corner of the business.

Two cases in point are Dialog Semiconductor and Imagination Technologies. As it happens, both are British firms with HQs just outside of London, but their products and appeal are global. And, just this month, both have rolled out new wearables widgets.

Before we go any further, we have to do some triage. Are you a chip-maker or a board-maker? If you make chips – if you’re an SoC designer – you’ll likely be more interested in Imagination’s offering. If your expertise is in designing boards or making boxes, you’ll want to lean in during the Dialog discussion.

Dialog has crafted a new chip and given it the melodious name of DA14680. Or, to its friends, “SmartBond.” (Cue Daniel Craig impression.) The ’680 is intended as an all-in-one wearables chip. “Just add sensors!” says the corporate propaganda. And they’re not kidding. A couple of sensors and a battery are just about all you’d need to make your own knockoff Apple Watch, FitBit, or gee-whiz wearable ID/security/payment device.

What’s the ’680 got inside it? Starting with the processor (of course), we see a lowly ARM Cortex-M0 puttering along at 96 MHz or below. Okay, so that tells us right away that it’s not fast and it’s probably not going to do the heavy lifting in our new wearables ecosystem. Instead, the ’680 is more likely driving the wearable portion, while talking to some other computer(s) over…

…a Bluetooth connection. This is the second major feature in Dialog’s ’680 chip, and a source of pride for its designers. It’s a Bluetooth 4.2 / Smart interface with lower power dissipation than the company’s earlier BT devices. The RF interface, balun, and single-wire antenna interface are all included, so you’re really just left to hook up some sort of antenna. Or use skin conductance. Your choice.

What’s the power consumption? “Low,” is the stock answer. To be fair, the chip has so many optional modes and configurable features that it would be pretty difficult to come up with an average, or even typical, power profile. Actual power numbers are best left to actual customers doing actual testing. Do beware, however, of a claim of 30µA/MHz that’s floating about. That’s the power for the Cortex-M0 core only, not the chip as a whole.

Unless you need accelerometers – and really, who doesn’t? – the DA14680 has almost everything you need to make a one-chip wearable device with a Bluetooth connection to its mothership (which is probably your phone).

Unless, of course, you’re designing your own wearable SoC controller to compete with Dialog, in which case you’ll want to peruse Imagination’s Ensigma Whisper RPU. Yes, that’s really its name. The RPU stands for radio processing unit, which means radio plus a processor. The radio part handles Bluetooth and/or Wi-Fi, while the processor… processes. The idea here is that the RPU is the wireless subsystem in your new wearables chip, and that you talk to it through the processor, not by fiddling with the radio directly. That’s good news for those who are radio shy, or who just want a little CPU embedded in their RF section to handle crypto, protocols, or funny interfaces.

The RPU is licensed as IP, of course, and the processor inside of it is – surprise! – a MIPS core. Imagination is the company that owns MIPS, after all, so heaven forbid that they embed an ARM core in their own IP. MIPS cores are at least as well suited as ARM anyway, with equivalent power efficiency, size, and performance. Unless you’re going to run third-party applications on your wireless interface, ARM compatibility here is pretty meaningless.

But doesn’t Imagination already have a wireless IP block that handles Bluetooth and Wi-Fi? Indeed, it does. But this one is better. Better because it’s more power-efficient, which makes especially good sense for wearables (there’s that word again). The thinking here is that most Wi-Fi interfaces are switched on almost all the time, squawking an SSID or listening for incoming data. With wearables, that’s rarely the case. Most wearable technology isn’t participating in a big building-wide network or exchanging lots of data. Instead, it’s probably uploading a wee packet from time to time, then shutting down. Thus, it behooves the wearable’s designer to minimize RF power wherever possible. And this Imagination claims to have done. The Whisper RPU keeps quiet as much as possible without violating the 802.11 specification or risking incompatibility with other Wi-Fi devices. It’ll ignore packets, listen only for bits it needs to recognize, and aggressively fall asleep in between beacon periods, all in the name of saving power.

Couldn’t you just turn down the power on your RF transmitter and get the same effect? You know, whisper? Not really, says Imagination. Wi-Fi devices typically spend 99% of their time listening and only about 1% actually sending anything. So turning down the transmit power doesn’t help you all that much. Sure, it’s an obvious place to start looking for wasted energy, but ultimately a dry hole. Reducing the receiving power is the real trick, and that required a ground-up redesign. Seems to be a trend.

12 thoughts on “A Dialog with Imagination”