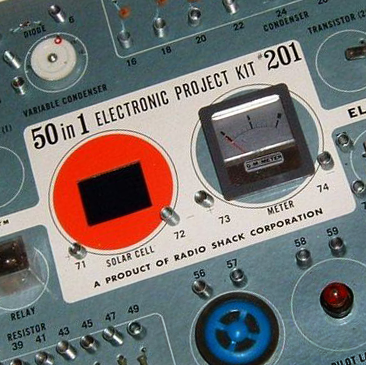 My fingers trembled and my heart pounded. I carefully bent spring terminal #35 and inserted the tinned end of the final wire. I was confident that I had double-checked every connection, but I still felt unsure.

As I slowly turned the knob labeled “variable condenser,” I thought I heard a hiss or some static. Then, suddenly, Merle Haggard singing “Branded Man” boomed through my tiny earphone. I jumped! I couldn’t believe what I was hearing. I hated country music, and it was the most beautiful sound my seven-year-old ears had ever heard.

I was alone in my room with the door closed. My parents were in the den watching TV. The moment was mine alone. I had created something all by myself – an amazing, real, actually working thing – with my own kid hands. It pulled music from the air – terrible, annoying country music – but I didn’t care. It required no power at all, not even a battery. It was pure magic.

That moment, in 1967, when I had just turned seven years old, set the course of my life for the next half century.

That year, my parents had given me two kits from the Tandy/Radio Shack Company. One was “Let’s Do MODERN Leathercraft – In the Style of the Old West,” which included eight “professional leatherworking tools” and supplies for making “8 Wonderful Genuine Leather Projects.” These projects included a wallet, a comb holder (an essential accessory in any young gentleman’s wardrobe), small and large change purses, three different key fobs, and a luggage tag.

The second was a “Radio Shack – Science Fair Electronic Project Kit #201 – 50-in-1” which, as the name implies, allowed one to “Build 50 Working Projects!” These included “Germanium Radio,” “Transistor Amplifier,” “Light Operated Morse Code Key,” “Telephone,” and 46 more. The kit consisted of a prototyping breadboard on a cardboard insert in a wooden box, color-coded-by-length wires, a few external components such as a battery holder, earphone, and photocell, and the all-important instruction manual. The breadboard itself was populated with dozens of electronic components – an assortment of resistors and capacitors, a “variable condenser,” a variable resistor, a transistor, a photovoltaic cell, a diode, a “pilot light,” a relay, a code key, and on and on.

I built every project in both kits.

Each component was mounted with numbered spring terminals attached to the component pins. For every project in the manual there was a description of the thing you were building, a theory of operation, a schematic diagram, and – most important for the seven year old budding engineer with zero knowledge of schematic diagrams – a point-to-point wiring guide (a netlist of sorts) specifying each connection to be made, (pin# to pin#) along with the correct color wire. White wire goes from #32 to #15. Red wire goes from #28 to #102, and so forth.

I can still feel the tactile sensation of the little terminal springs and have muscle memory for the fastest way to open them, slip in the tinned end of the insulated wire, and pop the terminal back, as well as the best way to hook new connections to a terminal without accidentally pulling old ones loose or shorting to adjacent terminals. At age seven, I always carefully wired up the circuit according to the book, double-checked that everything was correct (learned THAT lesson the hard way), and then, with confidence building, faced the “moment of truth” when I hooked up the battery terminals. No smoke? Good sign. Nothing getting hot? Even better. Now, does it seem to do what it is supposed to do? Sometimes.

After I had built and rebuilt every project in the 50-in-1, I started trying to learn what the symbols on the schematics meant. Slowly but surely I began to understand the correlation between the schematic and the thing I’d wired on the breadboard. I got the idea of current running around my circuit in a loop, and after much puzzling I finally figured out what each of the basic components was doing. Then, I started deviating from the designs in the book. What happens if you put a bigger resistor? A smaller capacitor? It all began to make sense.

The 50-in-1 was still with me by age 11, and I was now far off script from the instruction manual. Outside the door of my room, carefully concealed in the shag carpet by the baseboard, was a photocell, connected with long wires that ran along the underside of the baseboard back into my room. When someone walked down the hallway toward my room, they cast a shadow on the photocell, which triggered an alarm in my room. The second version included a switch that selected the buzzer or the light bulb, depending on whether or not I wanted the “silent alarm.” Unexpected invasions by my younger brother would be a thing of the past.

The tiny down of Denver City, Texas where we lived didn’t have a Radio Shack. The closest one was ninety miles away in Lubbock. Occasionally, my family would make the long drive to Lubbock, and once or twice per year we would go to the Radio Shack, usually so my Dad could buy CB radio gear. I thought Radio Shack was the most amazing place on Earth. I gawked at all of the project kits and dreamed of being able to build my own project from scratch – no kit involved – simply by selecting the correct components from the racks in the store.

About a decade after I got my 50-in-1, when I was in high school, Radio Shack introduced the first TRS-80 Personal Computer. My mind practically exploded when I heard the news. I wanted a personal computer more than anything in the world. I checked out a book from the school library that explained programming in the BASIC language. I wrote BASIC code on paper. And, with no access to a machine, I had to simply imagine what my programs would do. If only I had a computer.

My parents (and Radio Shack) came through again, and I finally got the TRS-80 I wanted. They didn’t skimp, either. They sprang for the almost $1K extra to upgrade to “Level II BASIC” and 16K RAM (the computer normally came with only 4K RAM). I spent incalculable hours dreaming up new things to do in BASIC with the 24-line black-and-white text display. I built up an enormous collection of programs I had written, safely secured on individual audio cassettes. There was no disk drive. You typed in your BASIC source code one line at a time, then typed “RUN” to see what it would do. If you wanted to save the program, you hooked up a conventional audio cassette recorder, pressed “record” and typed “SAVE”… If you were lucky, your program would be saved correctly. If there was a glitch (which happened often), it was lost forever. You wouldn’t know which until you tried later to load the program back from tape.

The knowledge and inspiration I gained building circuits with my Radio Shack 50-in-1 and writing software with my TRS-80 led me directly to my decision to major in electrical engineering and computer science in college. I got part-time jobs writing business software in BASIC to help earn money to put myself through engineering school. After all the software I had written on my TRS-80, my programming classes were a snap. In the engineering lab, my practical experience building countless hobby projects on my 50-in-1 put me light years ahead of most of my theory-bound peers.

When I graduated with my EE degree, my first job was in EDA – working on place-and-route software to help engineers with electronic design. Our software was written in FORTRAN and ran on mighty DEC VAX mini-mainframes, but echoes of the Radio Shack 50-in-1 and the TRS-80 rang softly in my ears, giving me confidence and quietly guiding my budding engineering career.

Decades later, I found myself working with FPGAs, and I couldn’t help making the mental connection from the FPGA back to my Radio Shack 50-in-1 breadboard – a magic box that could be almost anything you wanted it to be, and which you could reconfigure over and over as much as your imagination would allow.

Last week, it was announced that Radio Shack was bankrupt, the assets would be liquidated, and the stores would close their doors forever. Dozens of articles in various business and engineering publications explained how the company had been poorly managed, had not kept up with the times, and had suffered the same ills as so many brick-and-mortar businesses at the hands of the internet-enabled Amazons and Digi-Keys of the world. Or perhaps, some said, the demise of Radio Shack was due to a more subtle demon – the dwindling supply of “free time” that working Americans enjoy today compared with the 1970s and 1980s. The consensus seems to be that the company had lost its way and had really been dead for years. In fact, nobody actually understands how Radio Shack managed to survive as long as it did.

The last time I was in a Radio Shack was a couple months ago. I needed some cables, a D/A audio converter, an HDMI switch, and a 12V power supply for an entertainment system I was installing in a boat. The Radio Shack in the tiny town of Anacortes, Washington had them all – no online ordering, no waiting for a UPS delivery, no getting the wrong thing and having to wait for an exchange. I just walked right in, picked what I needed from the shelves, and was back at work on my project in minutes.

Radio Shack has been the target of countless media jokes this week – ranging from The Wall Street Journal to The Onion to John Oliver. The punchlines have flowed like water.

When I heard the news, I didn’t feel like joking. I quietly wiped away a tear, hoping nobody was looking.

Goodbye Radio Shack, and thank you.