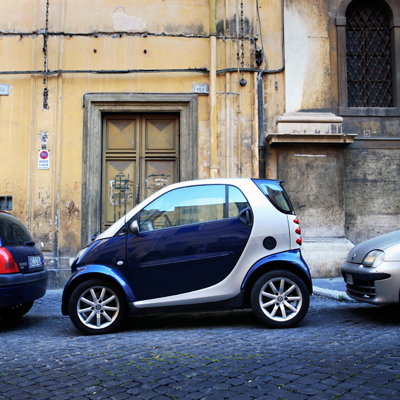 When Smaller is Better

There has been a lot of chest-beating over the years about who had the biggest, fastest FPGA in all the land. Countless press releases, PowerPoints, and posters have touted 30% better this and 4x more that. Each time a competitor leapfrogged the other, we lapped up the LUTs with renewed glee.

Lately, however, Lattice has been pushing the other end of the envelope, proudly proclaiming that they make the very smallest FPGAs. These FPGAs are so small, power-efficient, and cheap that they completely rewrite our notion of FPGAs. Literally everything you probably thought you knew about FPGAs is busted by these devices. Ask the average engineer and you’ll probably hear that FPGAs are big, expensive, power-hungry, and useful mostly for prototyping. They’ll generally continue that FPGAs would not work in mobile or battery-powered devices, aren’t useful for space-constrained designs, and would never-ever be found in a smartphone teardown.

Those of you taking an exploratory Sawzall to your Samsung Galaxy are likely to be sifting through the dust of some Lattice “iCE” FPGAs. Don’t worry – the FPGAs you just ground up are really inexpensive. Uh, sorry about your new smartphone, though.

What was Samsung thinking? They were probably thinking that these FPGAs are tiny, sip microwatts, cost pennies, and pack a lot of capability that comes in really handy in a mobile device. Now, Lattice has raised their game by shrinking their devices even more. The new Lattice iCE40 UltraLite is the smallest FPGA ever made – as small as 1.4 x 1.4 x 0.45mm. Don’t sneeze at your lab bench or you’ll lose it and never find it again. And, at 35?A, it will not be bleeding your batteries dry. Cost-wise, you could probably buy a couple of these things for a dollar (in volume) and maybe even get some change back.

Speaking of applications, what are these little fellas good for? The company says they are targeting the IoT space, particularly wearables, pedometers, always-on navigation, voice input, LED “breathing” effect, calendar alerts – anything that requires a tiny device to remain on duty to wake up the rest of the system when a big event happens, and to perform some housekeeping tasks while the rest of the system sleeps. In addition to the obvious consumer applications, there are also a wide variety of handheld industrial and medical applications where the capabilities of a tiny FPGA could come in handy.

Since a lot of the companies in these industries don’t have large teams of FPGA experts standing by (heck, many of them have never even dreamed of using an FPGA before), Lattice offers a lot of hand-holding as well as a suite of reference and demo designs. For starters, they have a finger-swipe sensor, an RGB LED controller, a pedometer, and an IR LED control application. In some cases, these demo designs could be rolled right into production use.

Lattice has established a solid presence in the consumer/mobile space with their devices. While there have been a number of FPGA companies who have gone after consumer sockets in the past, none have had the success and the focus of Lattice’s offerings of the past few years. The acquisition of SiliconBlue (which is the source of the technology for the iCE UltraLite family covered in this announcement) dovetailed nicely with Lattice’s existing ECP families and strategy – providing a portfolio that could cover a wide gamut of consumer-like applications.

Bringing FPGA technology into green pastures brings new challenges, however. For years, the direction of FPGA tools and technology has been based on feedback from existing (and mostly expert) FPGA users. While that process provided a nice environment for the rapid evolution of FPGAs for traditional-market applications, it had the effect of making the devices a bit enigmatic for new users and new applications. Lattice has had to double down on get-started assets such as reference designs, approachable kits, demos, simplified tool flows, and design services.

The good news is that since most of the applications for these devices are high volume, Lattice is in a position where they are probably selling much larger volumes of devices to a smaller customer base. That means the company can afford to invest more in support and services for any given socket than a traditional FPGA company who is supporting droves of small-volume and prototype designs.

Considering the enormous range of devices that are now called “FPGAs,” the term has become quite diluted. On one end, we have the devices we are describing here – costing pennies, burning microwatts of power, and delivering 640 LUTs in a package less than 1.5mm on a side. On the other end of the spectrum, we have behemoth devices costing tens of thousands of dollars, burning tens of watts, and delivering millions of LUTs in a single device.

It almost seems like we need a new name…

13 thoughts on “When Smaller is Better”