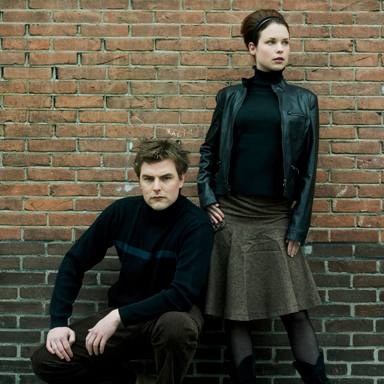 Instruments for the Black-Turtleneck Crowd

You can almost hear the ghost of Steve Jobs introducing the Saleae Logic Pro 16, gesturing to a rear-projection screen as he slips the device out of his pocket. It’s that kind of logic analyzer.

Believe it. The Logic Pro 16 is a hardware logic analyzer that even a design aesthete would love. It’s the lab instrument for the SoHo/Noe Valley/Pearl district crowd. And I have one. And no, you can’t borrow it.

Allow me to explain. Saleae (pronounced say-lee-ay) is a tiny, San Francisco–based firm that makes one thing: a miniature logic analyzer. It’s called simply Logic, in typical trendy south-of-Market style. It’s about the size of a hockey puck or the bottom half of an iPod. Like any good logic analyzer, it’s got a tangle of colored wires coming out of one end, but, unlike most other logic analyzers, it’s got a USB cable coming out of the other. And that’s it. There’s no display, no knobs, and only vestigial feet for resting on your lab bench. The thing weighs less than a 20-oz. latte and could easily hide in the palm of your hand. Is this a real test instrument?

You betcha. The Logic is basically a data-acquisition peripheral for your PC, Mac, or Linux box. It connects to said computer via USB and uses your keyboard and display as its user interface. Instead of twirling knobs on your Tektronix box, you mouse-click on your laptop (or whatever) and stare at the screen looking at waveforms. Acquired data is stored on your hard drive (or equivalent). It’s a 21st Century consumer electronics version of a logic analyzer.

Logic can capture analog waveforms, digital transitions, or both. In analog mode, you can capture up to 50 Msamples/sec, so the thing is no slouch. If you’re interested in digital signals only, it’ll do 500 Msamples/sec. Capture both simultaneously and you’ll have to choose how to trade off analog versus digital resolution. Of course, you can dial back the sampling rate for either or both if you don’t need that much detail.

Logic is also pretty smart about understanding buses and standard protocols. A simple mouse click tells it that you’re monitoring an I2C connection, HDLC, JTAG, CAN, Midi, SPI, Atmel’s SWI, or a bunch of other known interfaces, and it’ll happily decode the action for you. Can’t find your favorite protocol on the list? Saleae lets you define your own. In fact, the company positively encourages third-party software add-ons and plug-ins, treating Logic as a kind of Beagle Board for the gainfully employed.

It’s pretty, too. The software, that is. The box itself is pretty nondescript. Logic’s Windows/MacOS/Linux app is a free download that looks more like a software debugger than a hardware instrument. Rather than simulate the knobs and dials of conventional bench equipment, Logic jumps straight into the app gestalt of today. If you’ve never used a logic analyzer before, this one’s pretty easy to learn.

Cleverly, the software works even if you don’t have a Logic box connected via USB. Without missing a beat, it switches to “demo” mode, displaying made-up waveforms for you to pretend to analyze. That allows curious tire-kickers to play with the software before buying anything. Happily, Saleae doesn’t make you register, provide an e-mail address, or jump through other marketing hoops before downloading. You can try it out with complete anonymity.

Should you decide to take the plunge, a Logic won’t set your engineering budget back much. Prices start at $99 for the entry-level four-channel Logic 4, which you don’t really want. The Logic 8, Pro 8, and Pro 16 list for $200, $400, and $500, respectively. The difference is the number of channels (four, eight, or sixteen), and the sampling rate: Pro models are five times faster than non-Pro models. Everything comes with a three-year warranty and a six-month money-back return policy. You even get your choice of color. Ooooh, trendy.

For the price of pizzas at an all-hands meeting, or a new set of Dockers for every engineer on your project team, you can have a new logic analyzer. Heck, at $200 to $500 a pop, you might be able to afford a Logic for everyone. Spread ’em around. They’re cheaper than iPhones, more practical, and almost as stylish.

3 thoughts on “Instruments for the Black-Turtleneck Crowd”