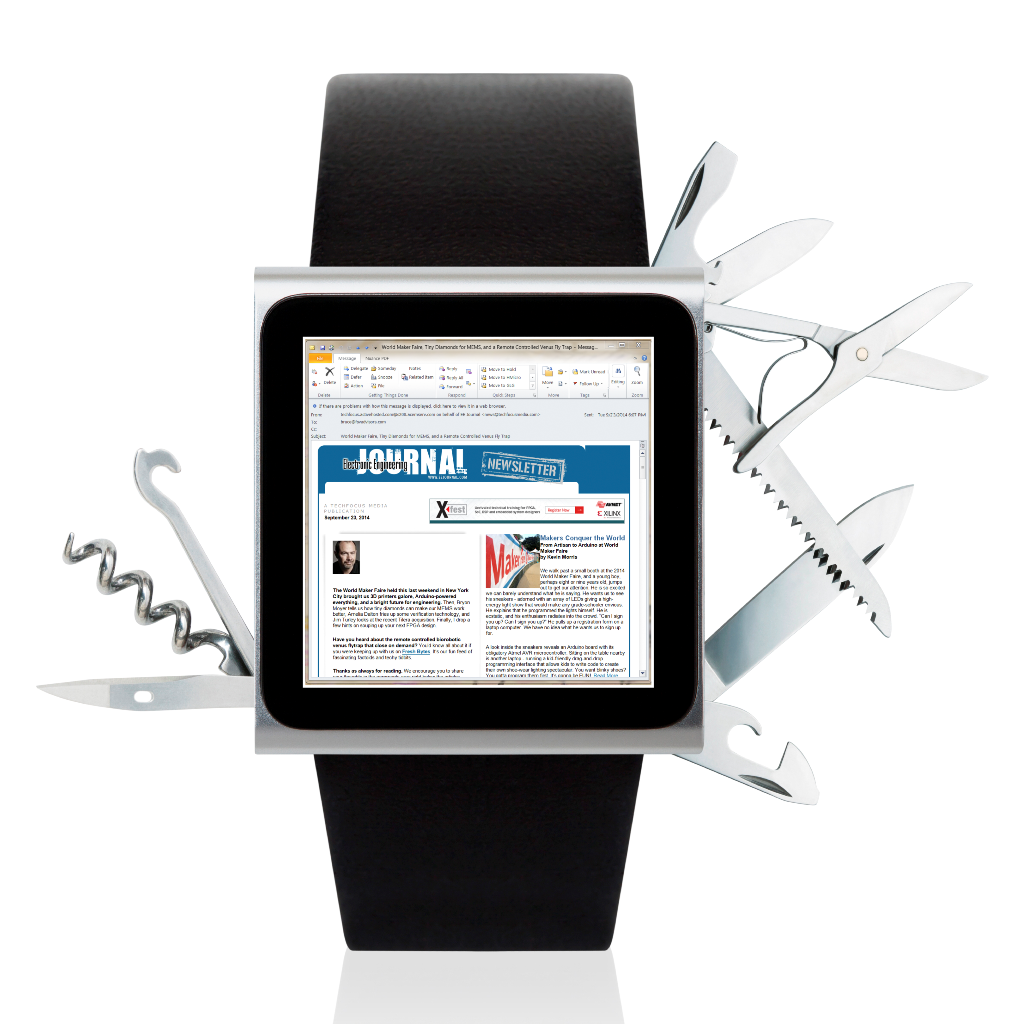 iWatch, Therefore I Am

It Is Not iWatch! Write It Ten Times: Apple Watch, Apple Watch …
by Amelia Dalton

Well, holy cow: when Apple does a wearable, they REALLY do a wearable. Plenty of kudos, plenty of TBDs and a few issues in the big announcement. Let’s break it down using the framework I dropped some weeks back while lamenting the state of journalism.

“My point here is that the wrist is VERY PERSONAL real estate.”

Major kudos. Apple Watch (the product formerly known as iWatch) will be available in a dizzying array of sizes, metals, colors, and bands. Apple Watch is JEWELRY. The attention to detail—even if you consider nothing but the bands—is extraordinary, even when viewed through the lens of a beautifully designed piece of jewelry. (Next time you’re in an Apple store, take a look at the wall o’ cases selected by Apple; that ought to give you a sense of how very wrong these elements could have gone.)

Others will try to follow suit; heck, given the pace that Samsung has fielded smart watches over the past year, they’ll have a posse of new models available by the time Apple Watch sees the light of day. But seriously folks, this element should not have been that hard to figure out: the wrist is very personal real estate and Apple internalized that fact before anyone else.

Major advantage. That dizzying array of sizes (2), metals (3), colors (2 per metal) and bands (I lost count) does NOT lend itself to a Best Buy experience. A whole lot of people will want to do the mixing and matching in person, say, as one would do at a jewelry store. Or a jewelry store within a retail store. And just who in the smart watch game has brilliant retail stores?  Only Apple. Sheer genius: they not only were the first to decode smart watch as jewelry, they’ve set the bar high enough that Samsung, LG, Motorola, and the rest will have a devil of time delivering those options with a great buying experience.

“The technology may not yet exist to build valuable and motivating smart watch functionality into something that people who are smaller than American football linemen can wear.”

I am not going to guess at the width of the Apple Watches nor the thickness, but suffice to say, we are dealing with A LOT of bulk compared to the Swiss timepieces that Jony—pardonez moi!—SIR Jonathan Paul Ive is so confident are f—ed. A number of otherwise glowing reviews commented that Apple Watch does not slide through the cuff in a men’s dress shirt sleeve. Hoodies and Ts, on the other hand: absolutely no problem.

Major TBD. Battery life. Très élégant magnetic inductive charging! How often do I need to utilize this beautiful charger?  Not talking. The major factor will be the duty cycle of the display, and the Bluetooth radio will NOT do battery life any favors. A rich ecosystem of Watch apps could easily prove to be a Catch-22: the developers will pay ZERO attention to power consumption, and, ironically, the more apps you take advantage of, the more drain there will be on the battery.

“The point here is that hundreds of millions of people believe that $100-$200 is the ‘right’ price for a new mobile phone, and MOST of them are not prepared to spend more than that amount on a smart watch.”

Major issue. All we know is that pricing STARTS at $350; no doubt, that gets you the smaller Watch Sport (aluminum case); it may or may not include a band.

Want something that looks nicer than a Swatch?  Then we’re talking the ‘core’ Apple Watch with a stainless steel case and the sought-after sapphire crystal. That bad boy will look sharp with real bands: stainless links, stainless loops and real leather. Anyone know what a combination of REAL watch plus band will set you back?  Anyone?  Anyone?  Bueller?  I’m betting the range is $550-$750.

Whoa!  That’s real money. There more than a few of ways this pricing could go sideways:

Bottom line: Apple Watch is by a wide margin the best publicly announced smart watch you cannot buy. I would bet that, come “early 2015,” Apple Watch WILL be the best smart watch you can buy. We KNOW that there will be lines of fanboys lining up—if they haven’t already started to do so—to buy one. Yet there are at least two significant open questions:

The size conundrum: while better proportioned than the competition, Apple Watch is still a BIG hunk of technology strapped to your wrist. In one sense, it HAS TO BE BIG: make it smaller and nobody over the age of 30 will be able to read the display. There is a certain irony in that on the same day that Apple finally addressed the customer desire for large-screen phones—perhaps driven in part so that people could actually READ the things—they introduced a tiny screen that seems too big for most wrists.

The battery life conundrum: word is that Apple is working to improve the unannounced battery life to an acceptable level. As noted earlier, there is a Catch-22 here: as the utility of the Apple Watch increases (more useful apps), the battery life will naturally decline from increased use. And a larger battery smacks you with an even thicker slab on your wrist. This is a really, really tough challenge.

And then there are those beautifully executed bands: wide selection, top-grade materials and magnetic closures. Part of the attraction here is swapping bands: sports band for the gym, metal link for work, leather for evening. Great idea, perfectly supported by the clever no-tools-required mechanism to change bands. Unfortunately, this sets an even higher expectation for long-day battery life: 7am workout through 11pm bedtime.

It will be fascinating to see if Apple manages to crack the smart watch code, as they’ve done so successfully in other product categories. We will start to get a sense in “early 2015.”