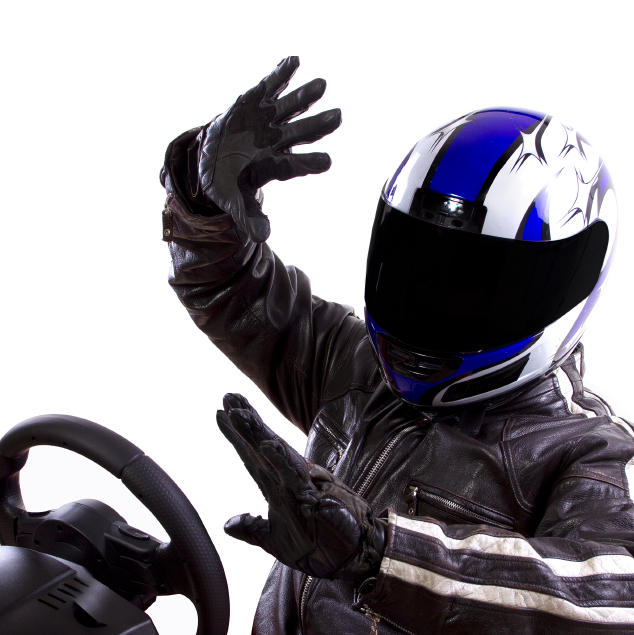 When you’re driving at 182 MPH, don’t slam on the brakes and expect to survive.

That thought flitted briefly through my mind as I watched the concrete wall surrounding Daytona International Speedway approach my car window at, well, 182 MPH.

This is the sort of thing that happens to me in the winter months, when the racetracks are too wet, the tires are too cold, and the carburetor is too finicky. I wasn’t really racing at the real Daytona. Oh, no. A strong sense of self-preservation runs in my family. That’s why we’re still here. Rather, I was joystick-ing my way around a PlayStation version of the big Florida racetrack, but that was now coming to an abrupt halt.

Stick-and-ball sports fans have the Sports Illustrated swimsuit issue to get them through the off-season. Racers have PlayStation.

Besides, Daytona isn’t really my thing. It’s an oval-shaped racetrack, and racing on ovals is about as dull as watching a North Korean election speech. Much more fun is road racing, where you turn left and right, change gears, accelerate and decelerate – y’know, actually drive a car. That’s for real men. Oval racing? Meh. It’s like watching goldfish swim around a bowl, or flushing a toilet and watching the swirl. Road racing hones a driver’s superhuman combination of skill, cunning, and race craft. And catlike reflexes. And steely resolve. So I can perhaps be forgiven an oval-induced lapse in concentration.

Car accidents can go bad in a real hurry. My pixelated vehicle was heading for a simulated (but awfully solid-looking) wall, and no amount of virtual physics was going to save it. It was about to become part of the computer-generated scenery. Nah, that’s not going to buff out.

Ironically, the problem was insufficient computer horsepower. Isn’t it always? This entire Matrix-like inside-the-computer crash scene had fewer MIPS and GOPS than a single real car. Today’s new cars have anywhere from a dozen to a hundred different microprocessors inside, controlling everything from the radio to the windows to the automatic transmission. They’re rolling data centers and computer networks, with fiber-optic cabling, real-time operating systems, hypervisors, debug ports, power conditioning, and cooling airflow, all just like a “real” computer center.

Here’s something for your Department of Necessary Recalibration, Mental Division: the head of one automaker recently bragged that their new 2015 models have more firmware than a Boeing 777. And that’s for a normal, road-going, family street car, not a racer.

To cite another example, the Ferrari 458 Speciale (granted, not a family car, but a street car nonetheless) features something called automatic slip control, an elaborate computer-controlled system that attempts to defy physics by preventing the driver from getting the car sideways. Likely an important feature in a $300,000 machine that can throw you into the bushes faster than the beefed-up boyfriend of the supermodel you asked out at the party.

Hate potholes? The new Mercedes S-class sedans have nose-mounted cameras aimed down at the road surface, looking for imperfections. Onboard computers then command a battalion of magnetorheologically adjustable dampers to raise or lower each wheel just as it crosses a bump or dip. At last, we can finally cross speed bumps at 75 MPH while the computers soften the ride!

Computer-controlled ride adjustments aren’t just for making well-heeled executives’ rides plushier. They can also aid performance and road-holding ability. Today’s sports cars can take corners so fast they’re pulling lateral g forces like an airplane. Street cars can do 1.33 g around the bends, which seems impossible. If gravity exerts exactly 1 g of force downwards, how can a car exert more force sideways than the strength of gravity pulling it down? That’s like leaning the car up against the side of a building and watching it fall up. Strange.

Moving aerodynamic parts gently massage the airflow around cars to reduce drag, minimize wind noise, and improve gas mileage. At one extreme, gas-sipping hybrids like the Prius and the Volt use moveable flaps to make the car aerodynamically slipperier, while performance machines use movable wings to generate downforce or as airbrakes to slow the car down. One carmaker discovered to its dismay that its curvaceous and stylish body style works just like the airplane wing it resembles, lifting the car off the road at high speed. The new model now deploys an aerodynamic spoiler at freeway speeds to keep it taxiing on the tarmac.

About half of these new microprocessor-controlled automotive gizmos are for convenience; the rest are for safety. The former sells cars; the latter keeps customers coming back for more. (Unlike tobacco companies, automakers have a vested interest in keeping their customers alive.) On one hand, GPS navigation systems and Bluetooth hands-free phones are handy features to have, and add to the desirability of new cars. On the other hand, they’re distractions from what should be a serious task: guiding a two-ton vehicle through public roads strewn with miscellaneous pedestrians, bicycles, stray cats, children’s balls, mimes, and other two-ton vehicles.

Some studies suggest that GPS navigation systems might actually detract from the driver’s awareness of their surroundings. We subconsciously treat them as autopilots and stop reading traffic signs, leading to a kind of trancelike highway hypnosis.

We’re in a kind of developmental valley between no automation and full automation, where automotive technology distracts us just enough to make us dangerous, but not enough to completely take over control of the car. Fortunately or unfortunately, that’s about to end. We’ve all seen Google’s autonomous car, and a couple of states in the U.S. have legally approved it for testing on public roads. But setting that aside for now, we’ll see semi-autonomous cars in just a year or so. Already, cars can sense an impending collision ahead and brake the vehicle to a complete stop from freeway speed. Others prevent wandering out of your lane by using cameras to detect painted lane lines or the edge of the pavement. Distance-keeping cruise control maintains pace with the surrounding traffic. And some automakers are experimenting with cars that can tell whether the traffic light ahead is green or red and gently speed up or slow down to either make the light or stop at the intersection.

All of these systems have flaws. New embedded developments always do. Drivers of cars with backup sensors complain about false alarms when the system detects impending threats from a harmless hedge alongside the driveway. Every morning. Automatic Bluetooth connections seem great, right up until you walk alongside your own car and the call switches to the in-car speakers and microphone, blaring the conversation to startled passersby. I watched as a friend “rebooted” his car (by turning the ignition off and back on while we sat in traffic) to get the Bluetooth to let go. What exciting times we live in.

The electronics content in our cars will keep growing. That much is clear. It’s a lucrative market for many chipmakers, and the upward trajectory should go on for… well, forever. Let’s just hope we survive it. Stay safe out there.