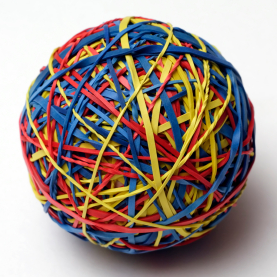 We’re careening down a road towards pervasive electronics. Heck, at this rate, we’re going to end up so far away from our primal roots that we’ll be completely helpless during a power outage. But insinuating those circuits everywhere doesn’t work so well with these clunky printed circuit boards that we’ve relied on for so many years.

No, these things will need to fit everywhere – wearable is obvious, but wearable is just the start. We’ll also be fashioning circuits into shapes that fit the items and the styles we like rather than vice versa. But that means that we need to be able to shape the circuits accordingly. And that means one of two things: either fabs have to be able to build circuits on arbitrarily-shaped 3D surfaces – unlikely – or we’ll need to create flat circuits and then make them fit these shapes after the fact.

Which means at least one thing: flexible. Which we’ve discussed before, both in the context of organic circuits and, more recently, even silicon. But there’s 1D flexible, meaning you can roll it up or make a cone, and then there’s 2D flexible – and anyone that’s tried to go from standard planar Euclidean geometry to spherical geometry can attest to the fact that adding a dimension complicates things. Especially when the shape is complex.

In those cases, the only way you can really get a material that started out flat to conform completely will be if it can stretch. It may need to stretch over peaks or into valleys, but stretch it must.

So we go from the world of merely flexible to one that’s stretchable. And possible applications for stretchability go beyond the need to make a flat circuit conform to a shape; Imec refers to that as one-time stretchable, since, after you’ve cemented the thing in place, you’re done.

But you can imagine clothing or other accessories that you put on and take off, and, in that process, they may need to stretch. And this stretching process will happen over and over again, not just the one time. “Stretchable” in this context can be considered equivalent to “elastic.” So now reliability becomes a question. How can you craft a circuit that can be stretched many times without compromising the performance and integrity of the components and connections?

I mentioned Imec above because this is a topic they’re working on, and they presented some of their latest results when I visited a couple of months ago. They have a specific program dedicated to figuring this out.

Now, you could argue that it’s simple: build organic electronics into a medium that can flex and stretch, and you’re done. What could possibly go wrong?

Well, first of all, that means you’ll be sacrificing the performance and density afforded by silicon – and that’s not inconsequential. Secondly, you might imagine that stretching a source or drain would have an impact on actual transistor behavior. Designers have enough on their minds with the umpteen sources of variation they already have to deal with. Having to accommodate geometries that might change during use is not likely to be received enthusiastically.

More subtly, what happens to a connection if it’s a straight line from point A to point B and you stretch it? Are there stretchable conductors with low enough resistivity to be useful? Because, if you use metal, it won’t stretch – it will break.

Imec has worked around these issues in two fundamental ways. At the highest level, they’ve partitioned electronics into functions and connections. Functions are gathered together in various “functional islands.” These parts of the circuit may be flexible, but they’re not stretchable.

The islands are interconnected by, well, interconnections – and those parts of the material are stretchable. So they have to avoid that third problem above: they need a high-quality conductor configured in a way that can stretch.

They’ve worked with a variety of conductors, but what they presented to us was copper arranged not in a straight line, but in a very deliberate meander that can deform into a straight line when stretched as far as possible. 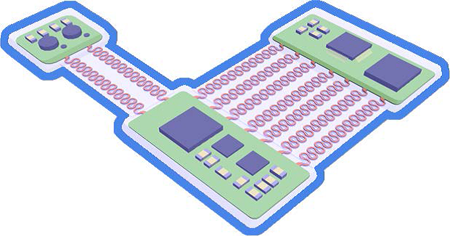 Now… some metals are relatively malleable, making them more forgiving in this kind of application. But they’re still not really plastic beyond some limited range of motion. So can these copper meanders really straighten out without cracking?

The answer is, yes and no. I know… that’s not helpful. So let’s unpack.

First, they tried what they called “unsupported” copper. That was simply a copper trace on the underlying elastic substrate (we’ll talk fabrication in a second). And it tended to crack, not so much right away, but after repeated stretchings.

How many stretchings it can withstand depends on a couple of considerations. One is the geometry of the meander, and they tried a variety of configurations – sinusoidal-looking waves and horseshoes being examples – and they landed on horseshoes of a given size. That mitigated the local stresses that lead to failure.

But, of course, regardless of configuration, the more you stretch it, the more stress you place on the metal and the faster it will wear out. So failure is plotted as number of stretches vs. percent of maximum stretch. The lower the stretch, the more times you get to stretch it.

Even given those parameters, unsupported copper couldn’t cut it.  Using 17 µm of copper, they achieved a range from around 70 stretches at 20% stretch to fewer than 1000 stretches at 10% stretch, meaning the copper failed after that number of stretches – not great. So they ended up working with a layer of polyimide (PI) under the metal to help take up some of the stress and “support” it. This had a dramatic impact: with 50 µm of PI under the same copper, they could stretch over 1000 cycles at 55% stretch. Taken down to 20% stretch, they stopped the test at around 70,000 stretches.

Depending on the stretching needs, there are a couple of ways to configure the underlying PI. If all of the lines will stretch together, then you can lay down a wide band of PI under all the lines, simplifying the patterning. But if individual lines will need their own stretchability (perhaps because some will go over hill and dale while others won’t), then you need to pattern the PI into the same meander as the metal. It will be wider than the metal – looking something like a winding river in late summer, with a narrower flow in the middle – the metal – overlaid on the wider riverbed – the PI. Which requires more careful patterning and alignment.

So how the heck do you make this? Imec’s thing is about readying technology for commercialization, so pure science experiments don’t pay their bills. They have to do this all with a focus on how industry can take up the results of their work.

The main thrust of this is that the circuits themselves can be made in standard PCB fabs using standard techniques. They do this by starting with a rigid carrier to build the circuit on. On top of the rigid material is a layer of what appears to be a wax as an adhesive – it melts away when heated later on. The flexible substrate and circuits are patterned, laminated, and assembled on top of this.

When done, the circuit is then encapsulated on the topside. They show a number of ways of doing this with different encapsulating materials. These include lamination, low-pressure molding, and something called “doctor blading” – scraping a liquid polymer across using a blade. (If you’ve watched certain printing processes where ink is drawn across a pattern with a blade, that’s the concept.)

Once the top is encapsulated, then the carrier and the adhesive are removed, at which point the bottom is encapsulated. Presumably, the encapsulant will be both flexible and stretchable. Else you’ve got a problem.

They show a number of applications for this type of circuit – many of which involve arrays of LEDs or sensors. Those arrays can be made to fit a surface – permanently or temporarily – based on the stretchable character of the circuit.

So who knows… in the old days, your mother might have written your name on elastic before sending you to summer camp. In the future, that elastic might actually be a circuit that has all of your data. (Or, more likely, a connection to Google, who will own all your data, and who, if you’re lost, will release the data in exchange for someone viewing and clicking on an ad.)