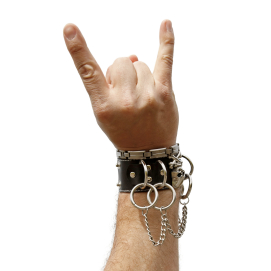 Are you into heavy metal? Do power generation, motor control, PLCs, robotics, and automation rock your socks off? Does spinning metallica make you want to raise your fist and yell? Then grab your lighters, motörheads. Stuff’s about to get real.

The number of this beast is F2837xD (it probably means something if you say it backwards), and it comes out of Texas. Dallas, to be exact, and more specifically, TI. Within the walls of TI’s black metal warehouse it’s called Delfino because, well, F2837xD is too hard to pronounce when you’re sober.

TI’s new Hydra-headed shard of silicon has two separate C28x DSP cores, for twice the DSP madness. The C28x is a riff on the ever-popular C2000 family, as any true fan of DSPs knows. (There are no ARM processors in Delfino, so no British steel here.)

Chained and bound to each C28x DSP is a real-time control accelerator called a CLA. Since the two CLAs are themselves programmable, that means Delfino is an insane four-headed beast, summoned up to slay the grimmest control, conditioning, and signal-processing demons.

The dual C28x cores are themselves mighty warriors, a testament to TI’s years of DSP expertise. Each core pounds out 12 billion beats per minute (200 MHz) while rocking a floating-point unit, a Viterbi accelerator, and an all-new trigonometric math unit.

The Viterbi Complex unit (VCU) is the second-generation spawn of a previous VCU design seen in earlier TI releases. If you ride the lightning working with AC/DC, it’s useful for narrow-band PLC and “smart grid” work, including IEEE P1901.2, PRIME, and G3. If you’re more into speed metal, the VCU also accelerates FFT/IFFT, good for vibrational analysis on motors that have an appetite for self-destruction. FFT/IFFT calculations go about six, six, six times faster than a C28x without the VCU, and the G3-FCC goes up to 10× faster. Which is almost as good as eleven.

Alongside the FPU and VCU is an all-new Trigonometric Math Unit (TMU). Why have a trigonometry slayer in an industrial-control unit? Because it’s good for motor control, kinematics, and robotics. For many deployers, the TMU can take the place of an FPGA in the torque loop, banishing the latter device to the abyss.

The real power chord of the F2837xD is the CLA – the control-law accelerator. The chip has two, and they’re powerful engines independent of the C28x DSP cores. Like the VCU, the CLA has appeared before, though never in so fell and mighty a manifestation. It serves as obedient coprocessor minion to the C28x, overseeing short, time-critical pieces of code needing swift and abrupt execution. Motor-control feedback or feed-forward loops are prime examples of such dirty deeds done dirt cheap. Offloading these noisome tasks to the CLA avoids corrupting the sanctity of the C28x, preserving its power for greater deeds.

The CLA speaks not in tongues, but understands C. Recognizing, however, that CLA programming will be unfamiliar to uninitiated powerslaves, TI offers up its no-sacrifice ControlSuite software to adrenalize code development. With it come helpful examples, drivers, and algorithms artfully crafted to keep developers from plunging headlong into the Stygian depths of a perilously unknown architecture.

Any DSP or motor-control device without its own analog/digital conversion would likely go down in flames, so Delfino defends the faith with quad 16-bit ADCs. Four independent ADCs means simultaneous sampling of four sources, ideal for three power phases and an output. TI has cast out its previous 12-bit ADCs, embracing the higher resolution with an iron fist. Hardcore power enthusiasts managing a wall of amps will appreciate the windowed comparators and the direct interface to isolated delta-sigma modulators.

Buy your merch at the door; prices start at under $20 for the F2837xD in modest quantities. Development hardware like the docking station and the ControlCard are a few hundred bucks apiece. At those prices, the hammer of Delfino may mean megadeth to corroded old multichip power- and motor-control acts.

9 thoughts on “Rockin’ It Industrial Style”