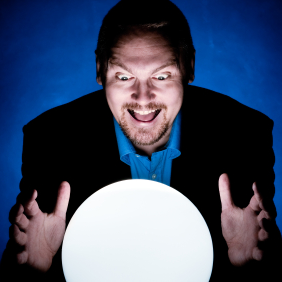 How do you know what is going to happen to you and your business in the future? In earlier times, you might have gone to a temple to have a goat or a chicken sacrificed and had the entrails examined. Or you might have made a pilgrimage to an oracle, like that at Delphi. In either case, the answers were never simple and required interpretation by priests, who charged for the privilege. Later you might have consulted a gypsy with a crystal ball, or an astrologer who interpreted the stars, or a practitioner of Tarot card reading.

Fortunately, we have moved beyond that today. To discover the future of the semiconductor industry, you can consult analysts who interpret signs from a range of different sources and then assemble them into credible-looking spreadsheets, which can be yours for a few dollars.

But what are the signs that they interpret? And how do they build these spread sheets? Malcolm Penn, the MD of Future Horizons, a London-based analysis company, actually tells you how he comes up with the forecasts.

For Penn, there four main factors that help to gauge where the chip business is going: the economy, unit demand, average selling price (ASP) and fab capacity. But, while there is clearly a relationship between these factors, he has yet to find a mathematical connection, and so it becomes impossible to build a model. Oh – and I forgot to mention that these underlying factors are also modified by what Penn calls “industry emotion, fashion, and sentiment.” You can translate that into meaning, roughly, that many decisions are not made as logically as the decision makers might think.

So how can Penn even begin to think about predicting what the chip market will do? Well, he has, as a starting point, two rules.

Rule 1: Violent swings are normal, stable growth is not. This may seem obvious to anyone who has been in the semi industry for more than a couple of years, but, regularly, there are people attempting to tell us that the world has changed and that the wild fluctuations that have marked the industry are a thing of the past – only to be flattened by the next violent swing.

Rule 2: History may not repeat itself, but it does rhyme a lot. Penn attributes this to Mark Twain, and extends it by saying that basic economics shows that periods of low growth are always followed by a strong rebound. This is, in some ways, a corollary of rule 1.

Also, in this period, the industry has swung from a position that “real men have fabs”, where the world was dominated by companies who manufactured their own chips (Integrated Device Manufacturers – IDMs), to one where the fab-light or fab-less model is dominant. Fab-light companies retain some fabs: for example, ST has a fab at Crolles in France where it carries out process development. The fab-less model was originally for start-up companies who could not afford the rapidly increasing costs of building a fab, but it is today the most widely adopted model. This means that, with the exception of Intel and Samsung and the specialist memory companies, the industry is dominated by the foundries that are making the chips for other companies. In turn, the foundries are dominated by TSMC, whose revenues are greater than the next ten pure-play foundries combined. (The picture is slightly distorted by Samsung, whose massive sales of semiconductors are second only to Intel’s, but who is also a player in the foundry business, as, to a much smaller extent, is IBM.)

The first of the major factors is the general economy, which, as we all know, is not in good shape. Penn feels that the indicators are that the economy is in the very first stages of recovery: this is reflected by, for example, the increased unit sales by TSMC and STM. However, he feels that most companies active in semiconductors don’t have a real understanding of the industry and how it works. He feels strongly that TSMC does have this understanding and so does Samsung, but he has concerns about the others.

Unit demand, the next big factor, is something that is on an upturn, despite monthly fluctuations. Some of these fluctuations are artificial: Penn blames them on management deploying the south-end output of a north-facing bull to, for example, enhance quarterly earnings. His concern is that inventories have been run-down all along the supply-chain. From stocks of wafers in the fabs to stocks of parts on the end customers’ shelves, the supply chain has no slack: further increased demand will put tremendous strains on the pipeline.

And, of course, fab capacity is also a factor, and here, too, increased demand is going to cause problems. There is evidence that today’s fabs are already heavily loaded, running at 85% to 95%. As well as meaning that there is very little room for growth, there is also little capacity for process development. Then there is another pair of Penn’s rules:

Rule 1: The next three to four quarters capacity is already set in stone.

This is because Capital Expenditure (CapEx) today = chips out in August 2014. And if the CapEx is for a totally new fab, it is going to be nearly two years before volume production will start – a timescale that hasn’t changed in 40 years.

Ramping volume is getting, if anything, even more long-drawn. Mask sets take 1.3 days/mask at an absolute minimum, and 28 nm processes take many more masks than are needed for 40/45 nm. An additional problem for the chip company is that where, in the past, it was possible to have chips made at two different suppliers, a second source today, even if it is possible to find one, requires effectively a completely new tape-out to meet the different design rules.

The final factor is the average selling price (ASP) of an IC. While these fluctuate, the general trend so far this year, and since 1997, has been that the average price of a chip has fallen and continues to fall.

Now Mystic Malcolm has recently stirred all those ingredients for the first half of 2013 into his cauldron and has then cast his eyes over the emerging steam. 6.9% has emerged as the magic number: that is, semiconductor sales will grow in 2013 by 6.9%. This is the same figure that he identified in January. (Interestingly – Penn never normally estimates to a decimal point.) And there are, as you can imagine, some caveats. Firstly, he is concerned that there may not be enough wafers on which to build the chips.  Secondly, he is concerned that while unit sales are rising, ASPs are still falling. However, there is one upside. TSMC had record output in Q2 – these are, of course, not sales to users but to the chip companies, so TSMC’s Q2 sales translate into the chip companies’ Q3 sales.

But the single figure, whilst interesting, is only for the year as a whole – and looking further forward is where the mists get even more complicated.

Chip manufacturing is facing two major challenges. (When hasn’t it faced major challenges?). There is the possible introduction of the 450mm wafers – vast slices of silicon that have well over twice the surface area of the current 300mm wafers. And there is the pressure of trying to shrink architectures so that it is possible to continue along the Moore’s law curve, including the use of extreme ultra-violet (eUV) light for patterning (or maybe not).

Future Horizons has worked on a European Commission project to look at 450mm, and Penn has stayed on top of the area since the report in 2012. So far, he says, Intel, Samsung and TSMC have said that they will move to 450mm (and are building plants that can easily take the equipment needed to handle 450mm). Other companies are indecisive, and the three European companies (STM, Infineon and NXP) have so far said no. (Although that may change following a recent EC statement – see later.) A big problem to fast adoption could be the people making the manufacturing equipment: today they can’t yet see a market big enough for them to justify the massive investment they will need to make. Penn suggests that this could be overcome by the chip manufacturers’ putting down a deposit for the equipment they plan to purchase. With 450mm the fabs will have to be fully automated, and this is one factor for a new fab costing in excess of $10 billion.

And while the move to 20nm is a different issue, Penn feels the two will probably coincide. Certainly, once 450mm is established, there will be no new process development on 300mm.

At 20nm there is also a debate about the way in which the transistor will be created. Until now the effort has been in CMOS FinFET, sometimes called multi-gate or tri-gate transistor technology, which effectively turns traditional transistors on their sides, so that the largest dimension is vertical. However, as mentioned in Alternative Research – Drugs and Electronics in Grenoble LETI and STM are working on an alternative approach, FD-SoI. Penn is not convinced that this has a future, but at least there is an alternative.

In May this year the European Commission announced “A European Strategy for micro- and nano-electronic components and systems.” This sees chip manufacturing as, in EU jargon, a “Key Enabling Technology”, and the Commission, in particular Commissioner Neelie Kroes, unashamedly wants a strong manufacturing base in Europe and is prepared to put money behind it. This may force a change in the attitude of the European companies towards 450mm, in part because the money is available to anyone who is prepared to raise the necessary matching funding, so that the new Intel Fab in Ireland could qualify.

So we have some serious questions about what is the way to build the future generations of chips. These become even more serious because Penn sees this year’s growth (6.9%) becoming potentially 20% in 2014. While this is growth that we enjoyed in the good old days of the industry, if it is achieved, it will be through a reverse of the ASP trends, and by straining manufacturing capacity and the supply chain even further than normal.