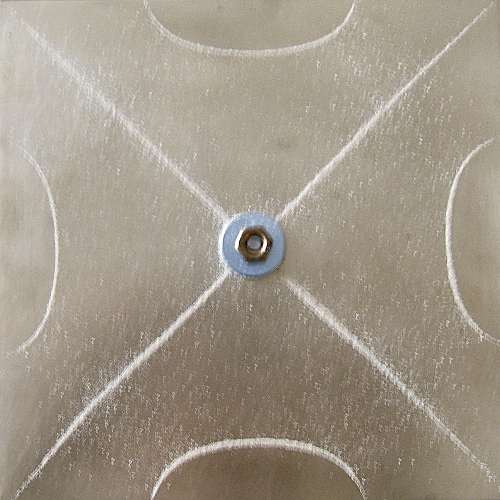 New Spin on a Gyro

Patents seem to have different effects in different industries. In the IC business, the history is rife with big companies having fundamental patents that are hard to get around. At some point sabers rattle and lawyers convene, and, pretty soon, a cross-licensing agreement happens so that pretty much everyone can make everything. (Yes, there are counter-examples, like the Xilinx Freeman patent, which stymied a lot of FPGA development until it expired.)

In the internet space, absurd patents have been filed. “Oh!! A button shaped like a star!! Let’s patent that quick!” There have been a few high-profile infringement squabbles, but, for the most part, it seems like people just roll their eyes and do what they want.

But MEMS seems to be different. I’ve heard both from device and fusion algorithm folks that patents matter and that developers will often approach a problem, realize that it’s patented, and back off. From the standpoint of protection, it’s been quite effective.

Part of this is the simple fact that MEMS is hard. There’s not a lot going on that’s obvious. And non-obvious is critical to a strong patent. That makes it harder for the MBA types to dictate, “The numbers say we need to be in this market, so go make something that will win.” Of course, it may be a good strategy, but if patents are in place, then the research folks have to find some completely new way of solving a problem that’s already been solved.

Seems like that would be a tough position to be in: in this scenario, you have some other company that has already demonstrated the potential of a market. (That’s the only time you have market numbers for analysts to digest: after someone has proven that there’s a market.) So you’re starting from behind. As if that wasn’t tough enough, now you need to invent something completely new, prove to yourself that it’s effective, robust, and reliable, and then convince the world that it’s effective, robust, and reliable. And that’s without even considering pricing and profit.

Well, this is exactly what a new company, Qualtré, is doing (yes, I’m going to see how many times I will put up with finding the e-with-the-accent thingy before giving up…). They’re “new” in the sense of having been busy for five years developing their product, and they’re now coming to light. And they didn’t pick one of the easy things to work on; they picked a hard one: a gyroscope. I’m not sure which came first – the desire to work on a gyro and then a search for an unblocked path or a technical idea for a gyro that they then realized had no patent barriers. Whichever it was, they are announcing a completely new way of implementing a gyro.

Not only have they managed (according to them) to skirt existing patents, but they are doing so in a way that they say provides better performance, allowing them to attack the higher-priced (and therefore, hopefully higher-margin, although lower-volume) industrial business. And it uses an approach that has, so far, been used for very different kinds of MEMS devices.

Vibration has been tapped as a way of doing timing, sensing materials, and filtering (at the very least). There are variants that focus on surface vibration and others that use the vibration of the entire mass; the latter is referred to as “bulk acoustic wave,” or BAW. The idea typically is that, by setting up resonance, you get a reliable frequency indicator. If, for instance, some material sticks to the surface, then the frequency might change, giving a telltale signal.

Qualtré is exploiting the BAW phenomenon, although not specifically for the purposes of detecting frequency. The vibration provides two things: a detection mechanism and noise reduction. The main element in their gyro is a carefully-sized disk (apparently there are a lot of tradeoffs between thickness and diameter). When set to vibrating in-plane, various vibration modes exist, and if you could slow everything down and isolate the modes, each one would be seen to distort the circular shape of the disk.

Now, confining ourselves to one mode for simplicity, picture a capacitance sensor at the north end of the business. This sensor is outside the disk, and it measures the size of the gap between the disk and the edge of the hole that the disk sits in. As the disk vibrates, that gap opens and closes at the frequency of vibration. This north gap will be widest when the east gap is narrowest and vice versa. So if you had a sensor at the east gap, its signal would look like that of the north gap, only phase-shifted by 180°.

If you had a sensor between east and north, then the gap at that point would never be as tight or wide as it is at the north or east sensors (since it’s not being elongated in that direction). So, in fact, if you took a sensor from the north end and slid it around to the east end (in a gedanken sort of way), you’d have a signal that would reduce its amplitude for the first 45° (I keep thinking that at some point it would reduce to zero – there must be a node there – but I haven’t quite convinced myself) and then increase again for the rest of the turn. During that entire slide, the phase would slowly shift 180°.

So far, so good. So here’s the key: if you get the thing vibrating north-south like that, it wants to keep vibrating north-south. If you turn the entire mechanism, then the disk and north-end sensor will turn, but, simplistically speaking, the vibration won’t. So, effectively, we’ve slid the sensor around as described above, and now the signal amplitude and phase will have changed, indicating a turn.

And this is how they do a gyro. Right now, they’re doing one disk per axis; these are packaged together to give a 2- or 3-axis gyro. They’ve partnered with Alps for the critical packaging part of this. 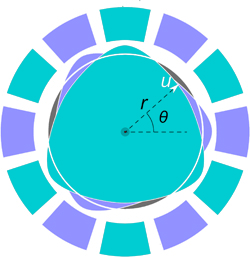 Now, when you rotate a disk out of plane, it also affects the “flatness” of the disk. If, instead of (or in addition to) measuring the gap in-plane at the edge, you also placed sensors above and below the disk at the edge, then that gap would also reflect out-of-plane rotations. This will be exploited in future versions so that one disk will handle 3 axes.

I mentioned that the vibration did two things for them; so far we’ve discussed only one. The other relates to noise. They run the oscillation between 1 and 10 MHz. So their signal of interest is going to be in this frequency range. Other lower-frequency noises and disturbances – in particular, vibrations caused by shock and other mechanical mischief, can be more easily eliminated using a high-pass filter.

And this takes us to the parametrics: how well does this thing do? They’re claiming very low drift: a pedestrian would be able to navigate for 30 minutes and still land within 1 meter of their destination. As a drift specification, they’re targeting 10 °/hr. Why not better? Because if you go better than that, you start to run into ITAR import/export restrictions.

And as to noise? According to Qualtré, 0.03 was a noise-rate-density goal (measured in degrees per second per root-hertz – dps/?Hz or °/sec/?Hz – or even °/?sec) for a long time, and InvenSense and ST finally broke it; 0.01 became the new goal. InvenSense has since achieved 0.005 dps/?Hz on some of its devices. Qualtré specs their rate noise density at 0.01 dps/?Hz (at 1 Hz).

Here’s one of the keys to what they’re claiming with respect to noise, however. For proof-mass-based gyros, vibration-induced noise is battled by bulking up the proof mass or the ASIC or even using redundancy – all of which make the device larger. They say that their method is scalable, so they can maintain their noise immunity while they shrink the sensor in the future.

Then there’s price. Are you going to be finding this on your phone anytime soon? Well, that’s not their goal in the immediate term. They’re battling cost using what they call their “HARPSS” – High-Aspect-Ratio Polysilicon Single-crystal-Silicon – process. They etch the disk out of the bulk, using poly for the electrodes. It’s also a CMOS-friendly process – by which they mean that it can run in a CMOS fab with only minor addition of equipment. It doesn’t mean that it’s amenable to monolithic integration (which they would call “CMOS-compatible,”) and they say they have no plans to try to integrate the ASIC with the sensor.

Now, MEMS got a bit of a price break by going from bulk micro-machining, where devices are etched out of the bulk silicon, to surface micro-machining, where devices are made by etching deposited films. So why would Qualtré’s bulk process provide a cost advantage? Well, first of all, it’s not cheaper than consumer gyros; right now, they’re at about 1.7x the price of cheapo gyros. But they claim that their process allows them to create these self-aligned “nano-gaps” reliably and without requiring “nano-lithography.” In other words, it would be more expensive without HARPSS.

They’re gunning for industrial applications right now. One example is optical image stabilization (OIS) on professional cameras. High-end consumer items like high-end games are another target. But they think that they may eventually be able to eliminate one of the gyros in a phone. And, given the cost of using three disks and an ASIC with complex co-packaging, moving to a single disk would seem to indicate lots of room for cost reduction, making future forays into full-on consumer sound not too crazy.

So here you see what it takes to get around well-established MEMS patents. We’ve got a new player in the tightly-held gyro space, and they’ve gotten there using an entirely different approach that, presumably, avoids existing patents (although there hasn’t been enough time yet for patent lawyers and trolls to decide this for themselves).

And, of course, Qualtré has filed patents of their own, opening the door in front of them and closing the one behind them so no one else can follow.

One thought on “New Spin on a Gyro”