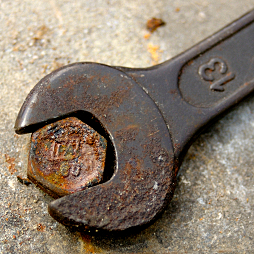 Will Electrical and Mechanical Domains Merge?

Electronics power density is approaching that of a nuclear reactor core. But don’t worry – it’s still an order of magnitude less than that of a rocket nozzle.

This was the eye-opening “got your attention?” snippet in a presentation launching Mentor’s new FloTHERM XT tool.

The idea of this particular tool is to make life easier for PCB and system designers as they manage heat by bringing together EDA and MDA (Mechanical Design Automation) data early in the conceptual stage of a design to allow earlier, faster thermal simulation.

The status quo is that the system designers toss their designs over to thermal specialists who tell them whether to expect significant meltage or worse (with the exciting potential for viral YouTube videos) or stable, reliable operation (yielding no adrenaline-spiking collateral). Designers can now take much of this up themselves, contributing to the time-to-market speed-up.

But who are these “designers”? Are we talking about electrical engineers doing thermal work? No; in this case, we’re talking about the folks designing the mechanical system elements. You know, the box, the fan (or whatever cooling is required), connectors, heat sinks. So this brings one type of mechanical engineer closer to the thermal specialist, which, to an electrical dude, is simply a different mechanical specialist.

And yet the Mentor folks are trying to get their message out to the electrical community as well, albeit with a PCB focus. Which made me start thinking about whether or not electrical and mechanical domains will start merging at a practical, day-to-day level.

Certainly electrical engineers have become more aware of heat than they would probably prefer. But their solution to heat issues is typically to reduce power consumption and to watch current density (which also impacts electro-migration, another quasi-mechanical phenomenon that’s crossed the divide). But we don’t think about heat management in the same way that mechanical folks do.

Electrical tools are all about conservation laws and abstraction. Things have gotten a bit messier as we approach atomic levels in ICs, but the answer remains one of modeling detail at a low level and then abstracting upwards. It’s the only way we can hope to verify billions of nodes in a reasonable timeframe. (And most EDA vendors will probably admit that their customers don’t tend to come back and say, “OK, simulation times are reasonable now; thanks!” It’s a matter of, “Thanks for the speed-up. Now, when can you make it even faster?”)

Mechanical tools don’t operate in such a structured fashion. They have to be able to handle pretty much anything that gets thrown at them, and many of the ideas come not from actual engineers, but from designers of the more artistic sort. You know, the guys that Apple uses (as do others now) to make boxy electronics more shapely. Which means, among other things, curves and other features that thwart abstraction.

And so they use finite element analysis (FEA), the only real way to simulate any arbitrary space. And FEA operates very differently from EDA tools, with its issues of meshing and convergence keeping mathematicians busy finding better and faster ways to model space. (It does share the characteristic of never being fast enough.)

Given the cultural differences between mechanical and electrical, is it really possible for the barriers to drop and for engineers to dabble on both sides? To determine that, let’s look at some of the main fields of play where these two come together.

We’ve started with overall system design, so let’s look deeper there. From an electrical engineer’s perspective, the electronics dominate the design of the system. After all, the box doesn’t do the work; it merely contains the working bits. The PCB is really where the two come closest.

The content of a PCB is electrical in nature; it’s determined by the electronic work to be done. The arrangement of that content – the layout – is partly mechanical and partly electrical. The shape of the PCB, how it’s mounted and connected, and how heat is removed are mechanical.

It gets more complicated, however, when custom PCB shapes are used. This is much more common in the consumer world, where the increasingly-popular electronic gadgets have to fit snugly on your body or in your car or on your bike. And, most of all, they have to look cool.

Now the decisions of the top-level designer – the one that went to art school – have a real impact all the way down to the electrical guy. You can design all the circuitry you want, but if you can’t get it to fit properly in that sexy package or if your blazing-hot circuits leave a blister on the wearer, it’s not going to work. Such design poses a significant mechanical constraint on the electrical designer.

The next obvious extrapolation of this PCB analysis is down to the nano-level: monolithic integrated circuits. Here the most obvious mechanical/electrical interface is the package. And electrical designers working in the 3D space (no longer monolithic) are truly working in a combination electrical/mechanical world.

On the electrical side, signals have to be validated from one component to the other inside the package. That verification includes speed and signal integrity. Power has to be validated in both domains: power integrity on the electrical side, heat dissipation on the mechanical side. And, of course, the logistics of shape, placement, bonding, and thermal expansion (to name a few) are classic mechanical issues. It would seem fair to say that electrical and mechanical share equal billing here.

If we drill down further, we get to the IC itself. Here much of the mechanical work is done during the development of the technology node. Thicknesses of layers, stresses and strains, barriers and diffusion might be considered mechanical, but really, it’s physics. Mechanical and electrical engineering are really just two different specialized branches of physics, and so the movement of atoms or electrons pretty much share the stage at the low-level technology development phase. So the question becomes kind of meaningless at this level.

Once a node is up and running, the idea is that the electrical engineer can move forward without thinking about the mechanical/physics stuff – except for current density and hot spots. So there are tools to help electrical engineers with those issues, largely because any problems will be solved electrically. Everything else is abstracted away: practical circuit design becomes electrical-only. A tool like FloTHERM XT can theoretically work at the IC level, but such a tool typically (and FloTHERM XT specifically) has an interface that will be more comfortable to mechanical (CAD) than electrical (EDA) guys.

Then there’s the completely different realm of MEMS. Unlike the other areas we’ve talked about, here mechanics rules supreme. The MEs are the Keepers of the Mysteries for many MEMS companies. In the circuit examples above, mechanics is largely a way to get electrical information to a user. But in MEMS, it’s the opposite: electrical circuits are a way to provide mechanical information to a user.

Older sensors remain largely mechanical, designed by and sold to mechanical engineers. But MEMS has changed that. The mechanical bits are translated to electrical signals, and, just like in an IC, the grotty details are abstracted away as soon as possible. Conditioning ASICs remove pesky noise, non-linearity, and other anomalies caused by inconvenient mechanical realities.

And even then, the abstraction continues – to the point where an IMU, for example, may have some built-in sensor fusion that can interpret the cleaned-up electrical representations of mechanical state and interrupt a processor to indicate that some high-level event (like a tilt) has occurred.

And I’ll infer from my discussions with some MEMS folks that the mechanical/electrical barrier here isn’t about to be broken. When talking about low-level approaches to solving problems, the line is often, “Oh, that’s handled by our mechanical guys,” accompanied by body language that indicates deferral to the august core of Holders of Great Knowledge that must not be questioned by others.

By cocooning such holies in an electrical interface, any embedded system designer can leverage the secrets without understanding or divulging them. So now, MEMS-based sensors are no longer designed for mechanical users; they’re sold to electrical dudes. Heck, even software engineers can use them.

So what’s the take-away here? My guess is that, in the PCB and IC/package world, electrical and mechanical folks will become increasingly comfortable with each other’s domains. Some of the actual work might even tunnel through the barrier between them. Will the electrical guy start doing significant levels of mechanical work and vice versa? I think not. For one thing, I don’t think they want to; the worlds are just too different.

At the semiconductor level, it’s all physics anyway. Above that, electrical engineers can continue to operate in abstracted bliss. And for MEMS, the mechanical wizards are likely to keep their exalted status.

So to answer the question I never posed but has likely bubbled to the top of your consciousness, yes, you all get to keep your jobs.*

*OK, unless they find someone cheaper.

9 thoughts on “Will Electrical and Mechanical Domains Merge?”