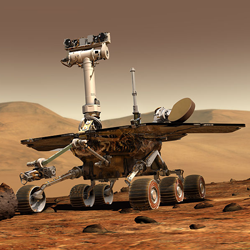 It is now nine years since Opportunity bounced onto the surface of Mars, with a projected mission life of 90 Mars days. (A Mars day, or Sol in NASA jargon, is about 40 minutes longer than an Earth day.) Already on Mars was Spirit, Opportunity’s twin sister. (The Mars Exploration Rovers – MER – team seems to refer to their Rovers as “she” rather as sailors do their ships.)

It may be incorrect to call January 24th “Opportunity’s Birthday.” I regard it as such, as this was the day that its computer switched from controlling the descent and landing activities to controlling the exploration activities, but the story really started a lot earlier.  If you read Roving Mars by Steve Squyres (Steve was then, and I guess still is, the principal scientist on the MER project), the start date could be October 5th 1957, when Sputnik was launched by Russia. More sensibly, it probably started in January 1996, when a team of academics and commercial people got together to pitch to NASA the idea of a Mars mission with a Rover that would gather geological data. The team didn’t win that pitch, but a year later a version of the team was awarded a contract for the payload, the bits that would do science, for a Mars Rover. The project was deferred, de-scoped, re-scoped, and, finally, they were tasked with providing the payload for two Rovers, to be sent to Mars in 2003.

During the time spent building the Rovers, there were two problems with Mars missions. The Mars Climate Orbiter burned up in the Martian atmosphere rather than orbiting, because one group using imperial units passed figures to another group, which assumed that the figures were metric – ouch. This was an issue for the MER team, as they planned to use the orbiter as a relay for radio signals. A few weeks later the Mars Polar Lander didn’t land, but fell from 40 metres above the surface. This was a system problem: when the landing legs were deployed, they accidently changed an Indicator State from zero to one. This state bit was used to tell the landing motors that they could shut down, as the vehicle had landed. During testing, no one ran the entire sequence from leg deployment to landing, so the mistake was not caught. Squyres uses this as an example of why you have to “Test like you fly and fly like you test.” By this he means that everything that is planned to happen in the flight has to be tested, and nothing should happen in the flight that has not been tested.

Following the problems with the Polar Lander, the team decided to use an earlier landing method pioneered with the Mars Pathfinder mission. This wrapped the Rover up in balloons, and while the descent until it was close to the surface would be slowed down by rockets, the final few metres would be a straightforward drop, with the balloons absorbing the energy. Reusing the Pathfinder system saved a lot of time and money, but it forced the Rover into a fairly tight packing space inside the balloons – too tight, in fact, and the descent was made in a re-engineered system.

Some of the decisions they made were almost not rocket science. The Rovers had to be solar powered. (Curiosity, which landed in August, 2012, was able to use a different landing system, so as well as being much bigger – the size of a large car as opposed to the MERs golf buggies – it was able to use a nuclear power source.) The solar panels had to create a lot of power – they were originally rated at 140 Watts. This was used, not just for the management and communications electronics, but for motors for driving the Rover, for the electronics for the instruments, including more motors, and also for heating to keep the electronics warm, particularly during the Martian nights. The average temperature on Mars is -60 C (-76 F). The team was also aware that the dust storms would cause a build-up on the panels with a loss of power. This was why the project was thought to have a probable life of 90 Mars days (Sols).

The payload included cameras for observations, including generating stereoscopic images, and navigation, and the Miniature Thermal Emission Spectrometer (Mini-TES) – which remotely selects rocks and soils for closer examination. An arm, which can be manoeuvred in three dimensions, has a Mössbauer spectrometer and an alpha particle X-ray spectrometer, which provide detailed analysis of rocks and soil, and magnets and a microscopic imager for high resolution images. Also on the arm is the Rock Abrasion Tool, a combination of grinding wheel and brushes that drills into rocks to expose the core and provide dust samples for the spectrometers.

Each of these had its own controls, usually a PCB, within the core Warm Electronics Box. Also in the WEB are the main control system and the lithium ion batteries. The heart of the electronics is a RAD6000, a single-board computer with a radiation-hardened processor, similar to the PowerPC 601. The board has 128 MB of RAM, 256 MB of flash memory, and 3 MB of EEPROM, and the processor is rated at 20MHz. This is very much the workhorse of the US space effort, and while originally designed and manufactured by IBM, it has, through sales and takeovers, finished up as part of BAE, where it has evolved into the RAD750 single board computer with an IBM PowerPC 750 used in Curiosity. The PowerPC 601 was already obsolete by the standards of the consumer world when it was first selected, but it was a processor that was fully known and understood. Wind River’s VxWorks is the operating system.

With all the electronics on-board, it is not surprising that there is a roll-call of the leaders in the embedded industry claiming that their products are trundling around on Mars. Both Xilinx and Actel (now Microsemi) have FPGAs in the Rovers, and Green Hills tools were used in software development, including re-compiling the operating system.

The single processor carries out a number of tasks. It was the controller for the landing on Mars and then was reconfigured to run both the driving and other service tasks as well as pre-processing observational data for transmission to Earth. Communication with Earth is through direct transmission and indirectly through orbiting spacecraft. To complicate life, a signal can take anything from 3 minutes to 21 minutes to get from Mars to Earth and as long to go back again. And since Mars revolves on its axis there are only certain times when communication is possible, and these vary both with Mars’ axial rotation and its rotation around the Sun.

This time lag and moving window for communication are things that the team have learned to live with – but only 17 days into Spirit’s mission, while Opportunity was still in flight, the communication gap was a big barrier when trying to understand why the Rover had stopped communicating. Over several days it became clear that the central computer was failing, rebooting and failing to complete the reboot. This cycle was continuous, even during the hours of darkness when it was draining the batteries. Attempts to force it to shut down, including the SHUTDWN_DMT_TIL (“Shutdown Dammit Until “) failed. Someone figured out that the problem was an over-full flash memory, and the processor was forced to reboot into a very limited mode, which allowed the flash files that were purely related to the landing sequence to be deleted. This cleared enough space for a successful reboot. The whole process took a very anxious 15 days.

If you have ever reconfigured or upgraded your desk-top PC’s software (and who hasn’t), you know that anxious moment when you turn the power back on. The software on Opportunity and on Spirit has been upgraded several times, starting with an in-flight upgrade while they were still on their way to Mars. A major upgrade in 2007 provided the Rovers with greater autonomy on when to extend the arm to examine a rock and which images to transmit to Earth.

Spirit, as the first to land, was often the first to undergo different issues. For example, dust gradually built up on the solar panels, reducing their efficiency. By March 2005 they were only 60% efficient and then, overnight, leaped back to 93%. They were probably cleaned by a dust devil, a small whirlwind. Since then what NASA calls “cleaning events” have been regular occurrences, keeping panels relatively clean.

The soil on Mars can be loose, and both Rovers have been trapped for different periods of time. Spirit became caught in sand in May 2009, and it became impossible to free it. While it carried on operating as a fixed research station, it was oriented in such a way that the solar panels couldn’t generate enough power to keep the electronics warm, and it last communicated with Earth on March 22nd 2010. By this time it had operated for 2623 Sols, compared with the mission life of 90 Sols. Despite problems with wheels, it had travelled 7.73 km (4.8 miles) against the original plan of 600m (just under 2,000 ft).

While the distances travelled are tiny in comparison to the size of the planet (the Mars diameter is 4,220 miles – about half that of Earth) both Rovers have added considerably to our knowledge of Mars.  There is now a general acceptance (confirmed by some recent findings from Curiosity), that Mars had water – but a very long time ago. This has come from examining rocks, soil and even the sand thrown up by the stuck wheel of Spirit. Reading the pages on the Rovers web site can easily waste days of time – but it is fascinating, particularly the videos.

But what I find so thrilling, apart from a mental picture of the little chap busying itself on the surface of Mars, is that the embedded system engineering on the Rovers was so good and stands in marked contrast to so many consumer products. OK – they had longer to work on it and more money to spend, but Test like you Fly and Fly like you Test still has relevance to even short-term and budget-limited development projects.

Happy Birthday Opportunity, and may you have many more of them.

One thought on “Happy Birthday, Opportunity”