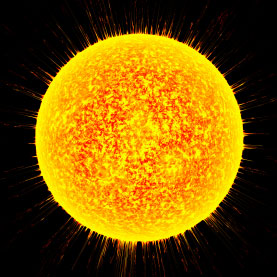 Batteries are the bane of portable device design.

Just about every portable or mobile device or system that does anything interesting – that is, anything that would require a “real” chip like a processor or FPGA, or anything that does meaningful real-world interaction like drive a display or spin a motor – needs a significant amount of power. When you can’t plug into the wall or the grid, your options are pretty narrow. The essence of your design becomes a tradeoff between the capability and longevity of your device and battery size, weight, and cost.

We’ve all briefly considered solar, of course. The romantic idea of a perpetually powered system gleaning what it needs from nothing more than the ambient light is a powerful aphrodisiac. We want to go on a date with solar. We buy flowers. We show up at solar’s door in our spiffiest engineering outfit.

Until now, solar just wasn’t a good fit for mobile and portable systems. Solar’s power production for the amount of area required and for the weight of the panels was fine for the tops of buildings or giant open fields. But the amount of power you could get from the solar cells you could fit on or around your mobile or portable device was, well, pathetic.

We’re all engineers, so after that first date, we probably all did the same math. We had been working to reduce the power consumption of our devices, and we’d been making huge strides. We first thought that if we put our systems on a diet and slimmed down their power consumption, they might eventually be cool enough to go on a second date with solar. After doing the math, however, we realized that would never happen. Not for a long time, at least. Solar was out of our league, power-wise. We could slim down our power consumption, but solar needed to meet us partway. Solar needed at least 2x-3x more power per unit area/weight than it was putting out.

Alta Devices, a Silicon Valley startup, has just announced the release of their “military charging mat.” OK, whatever. We’ve seen all kinds of gimmicky solar charging accessories for years. They all look cool and completely fail in practical terms. With those, if you hook your laptop up to your solar gadget and leave it in the sun for a couple of days, it’ll have enough power to check your email a few times – assuming it didn’t get stolen or damaged from sitting outside in the sun for all that time. Did we say above that solar was impractical for mobile devices. Yeah.

This one is different, however, and the difference is in the underlying technology. Alta’s solar cells are way more efficient – hugely and significantly more efficient. How? Well, they use Gallium Arsenide. OK, whoops, almost lost you there, didn’t we. Yes, we know that GaAs is enormously more expensive than silicon, and that we might as well have just told you that Alta made cells from material obtained from poached unicorn horns, but bear with us. Alta has a novel (and of course, patented) system for building flexible, thin-film solar cells on GaAs wafers – and then re-using those wafers – possibly hundreds of times. The GaAs wafer acts as a “seed” to grow more crystal via epitaxial growth. Since GaAs will allow other types of crystals to grow on top of it, the company heats the wafers to a high temperature and grows a layer of aluminum arsenide on top, followed by the layers that make up the solar film. At the end of the process, the AlAs layer is etched away, freeing the film and making the wafer available for re-use. A nice YouTube video explaining the process can be found here.

The resulting film has set records for solar cell and panel efficiency, and, because it’s a flexible film, the power output for a given weight is even more impressive. If you’re looking for the most solar power for a particular area, or the most power for a particular weight, Alta’s the deal. What’s the catch? Their power per cost is still well below garden-variety silicon solar cells. So, we won’t be seeing vast arrays of Alta cells on top of buildings any time soon. That will require some impressive scaling of their manufacturing process. For now, Alta’s cells are a win where cost is not the primary driver – like in small form-factor devices where solar would not otherwise be practical. For now, Alta needs to find markets that will pay a premium for solar cells with unmatched power-per-area and power-per-weight.

The “military charging mat” is just such an application. Today’s fully-equipped infantryman carries a pack that is on the order of 100 lbs. About a third of that weight is batteries. The charging mat allows batteries to be re-charged on the fly, and that can reduce the weight of the pack by an estimated 25 lbs. That’s a big deal (or at least it would be for me if I were schlepping over 30 lbs of batteries around).

Obviously, this is a compelling product for organizations (like the military) with some budget and a battery problem. However, what are even more interesting to us are the potential future applications. Because the thin-film cells are also extremely light, they are perfect for applications like laminating onto aircraft wings – where their high efficiency would give a significant boost to the flight time of electrically-powered aircraft. The idea of a remotely-piloted plane that could stay aloft indefinitely using only solar power becomes more of a reality.

For designers of many types of mobile devices, this technology should give pause. You could put enough photovoltaic capacity on a typical mobile device – with the form factor of a laptop or even a smartphone – to make a significant contribution to the power budget. More power from solar could mean less cost, weight, and size dedicated to batteries, and the entire device tradeoff formulation could shift. For some devices, the possibility of eliminating batteries (or at least external charging solutions) altogether rears its head.

Alta Devices is in the very early stages of ramping their technology for volume production. Their success or failure will likely hinge on their ability to scale production into high volumes and lowering the cost. If they succeed in these operational challenges, their solution will become practical for more and more end applications. Meanwhile, products like the “military charging mat” promise to generate demand and cash flow to support the expansion and scaling of the company’s manufacturing. We think that could be a good thing for the whole design community because of the game-changing potential of solar power for mobile devices.