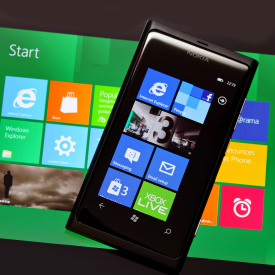 The worldwide rollout of Windows 8 has just happened, and I can’t stop thinking of an impolite word that begins with cluster—.

Like a lot of you nerds out there, I’ve been using Windows 8 on a spare PC for a little while now, and I must say… it’s going to fail, big time. It’s too different, too incompatible, and too confusing for the average PC user to want to have anything to do with it. With all the inevitability of Greek tragedy, we’ll watch the final spasmodic, reflexive twitching of the post-PC era. Take pictures, everyone. You’ll want to tell your grandkids about this.

Albert Einstein reportedly said, “You can’t solve problems with the same minds that created them.” My uncle also said, “You can’t put lipstick on a pig.” I find both of those comments oddly relevant here.

Microsoft is spending a reported $500 million in advertising—that’s advertising, not software development—for Windows’ big coming-out party. But instead of birthday cake, Redmond will be savoring the coppery taste of humiliation.

Oh, Windows 8 looks nice. It’s got a modern, touch-centric interface that gets us a bit closer to the cool Minority Report experience. Or an iPad. Or Android. But that’s not what Windows users want. Except for the technical outliers like us, Windows users don’t care about sexy new interfaces. They just want to get their jobs done. They want to come into the office, get coffee, and fire up QuickBooks, or Excel, or Photoshop, and get on with their boring work. Now those familiar programs are hidden behind “live tiles.” If they’re available at all.

Oh, we didn’t tell you? There’s no Start button anymore. No menus. The task bar is gone. There’s no close button. Or even windows. No, Windows has no windows. Yes, we have no bananas.

If you’ve used Windows 8 you know that it’s schizophrenic. There’s the new interface (formerly called Metro), which looks nice but gives absolutely no clues as to how to use it. There’s also the old-style “desktop” interface. Windows 8 can switch between the two, sometimes on its own and sometimes on command. But it’s not at all clear how you do that, or when you’d want to. Unlike previous versions of Windows, its features are not “discoverable.” That is, there is no menu of options to browse. In making the interface look clean and uncluttered, Microsoft removed all visual cues as to its operation. You just have to know.

Again, if you’re a computer nerd, that’s okay. We like to tinker and fettle. But if you’re a normal person, it’s utterly inscrutable. I can’t imagine IT managers or small-business owners installing Windows 8 on everyone’s PC over the weekend. Picture the revolt when the rank and file come in Monday morning to find Metro staring them in the face. They’ll have no clue how to operate their own computers. Productivity will sink to near zero. What possible incentive is there for people to use this?

Not that Microsoft isn’t making it attractive. Apart from the defense-department level of advertising expenditure, the company has also bombed the price. It costs just $40 to upgrade from Windows 7 to Windows 8. That’s one-third the price of Office, for an entirely new operating system. That’s cheaper than some of the toy-like add-on packs of icons and wallpaper that Microsoft used to sell for Windows 95.

Henceforth, all software shall be downloaded through the Windows Application Store (á la iTunes), not installed from CD. That’s fine, except… uh… where are my favorite applications? Old PC programs will run in schizophrenic mode, but new ones for the Metro interface need to be written afresh. And that’s a lot of work. Naturally, Office will be one of the choices—and Skype. That’s no surprise; Microsoft spent $8.5 billion to acquire Skype last year. They’d better have the app ready for launch day.

So let’s see… We get an all-new user interface that Mabel in the front office doesn’t know how to use… our important applications are relegated to second-class status… our printer stopped working… and that’s the good version of Windows?

Yes, because the situation for Windows RT is even worse. RT may look like Windows 8, but its appearances only flatter to deceive. Apart from the Windows name, RT might as well be an entirely new operating system from an unrelated company. It’s that different. For starters, it runs on ARM processors, not x86 chips, so neither it nor its applications are compatible with any PC ever made.

Then there’s the dearth of RT applications. Again, your current PC programs don’t run on RT and they never will, so it’s not really Windows in the usual sense of the name. Apart from a new version of Office (Word, Excel, PowerPoint, and OneNote, but not Outlook) and a handful of new RT apps, there is no code. It’s an entirely new platform with entirely different software needs.

And then Microsoft ups the confusion ante by combining the announcement of Windows 8 and Surface, its new tablet that runs—wait for it—Windows RT and not Windows 8. That’s right: on the day Microsoft starts telling the world to buy Windows 8 it stocks the store shelves with tablets that don’t run Windows 8.

Imagine the confusion when Microsoft fanboys (I assume there are some) wait in line to buy the new Surface tablet at 8:00 AM, only to get it home and realize it’s got nothing to do with Windows 8. Or when Granny opens her birthday present to reveal a shiny new Surface that doesn’t run any PC software. Or when the IT manager relents by allowing employees to bring their Surface tablet to work, only to find that RT can’t join a network domain.

There’s going to be a long line for the Returns counter at Best Buy.

Other products have pulled this off before. The iPad was an all-new platform with all-new applications. It had no backward compatibility with the Mac. Heck, even the hardware was similar: Macs used Intel processors and iPads use ARM chips. So what’s the problem? Why be hatin’ on Microsoft?

Because the iPad wasn’t new. Apple started out slow, introducing its new touch-screen user interface with the iPod Touch. Then came on-screen Web bookmarks (but no native apps). Then came the iPhone, with the new interface, bookmarks, and (later) apps. Then came the iPad, by which time Apple had revised iOS several times and the market had accommodated itself to the new usage model. Early iOS devices (even iPhones) generally cost only about $100, and most apps were just 99 cents, so the hurdles to adoption were low. By the time iPad came along people were willing to pay $500 for a tablet they already felt comfortable using. But Surface is totally new, totally unproven, and has exactly zero software available for it. And it’s piggybacking on Windows 8 in the most confusing and disappointment-inducing way possible. It’s guaranteed to cause a consumer backlash, and Microsoft brought this all on itself.

The result will be that PC users stick with Windows 7 (or just as likely, XP) until someone pries their fingers off the keyboard. Tablet users will buy Android/iPads in even greater numbers, and Microsoft will be stuck trying to reconcile its elevated expenses (it now has two major operating systems to support) with its depressed revenue (neither one gets much traction, while application sales decline, too).

And Microsoft’s Reign of Error will come to an end, just a reflection on the Surface.