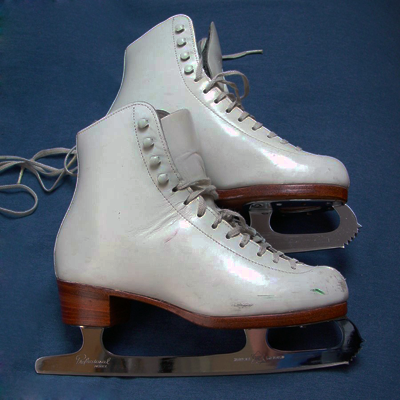 I recently had a conversation where it was noted that navigation is possible using only an accelerometer, since turns register as acceleration in the lateral direction. On further reflection, I realized that this is true only as long as you know something about how the accelerometer is mounted. For instance, if you’re in a car, then the direction you’re facing changes as you turn and always coincides with the direction in which you’re moving.

Gyroscopes are typically included for a more general solution that gives independent information on the direction you’re facing. In a car, the accelerometer and gyroscope should agree (albeit with very different math). If they don’t agree – that is, if the accelerometer thinks you’ve turned but the gyroscope doesn’t think so – it probably means something not good is happening. As in, you’re skidding or sliding on ice.

Which got me thinking: If you instrumented a figure skater with accelerometers and gyroscopes, what would they be saying during some outrageous maneuver? (OK, they would probably be saying something like, “00001112358ADFFFFFWTFFFFF,” but that’s not particularly helpful.) So this is an attempt to imagine sensors on various locations: the top of the head, on each shoulder, on the hands, on the feet, and… well… here’s the tough one: at the center of mass. Tough because, of course, it moves around. So we’ll simply have to imagine a floating set of sensors for that. We can do gedanken just as well as Einstein.

Now, to be clear, I’m not a figure skater, nor am I particularly familiar with the intricacies of the sport other than what I’ve seen in the Olympics. To me, all the jumps more or less look alike, so the names of them and the other maneuvers are something of a mystery to me. (Although I could have sworn my high school PE teacher had numerous conversations with me about the Lutz, even though I could swear he pronounced it starting with a “k”…). So I’ve had to do some basic research in order to pretend to appear somewhat knowledgeable.

So let’s start the routine. Our skater moves from the side to the center of the rink; all accelerometers register the start and the stop. Right before she* slows and stops, she spins around to face where she started. Now the gyroscope registers the turn. Since she didn’t change actual speed while turning, the accelerometer at the center of mass shouldn’t have registered anything. The accelerometers on her extremities show activity consistent with moving in a semicircle.

Following the turn, however, when she starts to slow, the center-of-mass accelerometer will actually think** she’s starting to go faster. Why? Because its frame of reference has reversed. Positive and negative in the X and Y dimensions have flipped. The accelerometer itself has no way of knowing this – which is where sensor fusion between the gyroscope and accelerometer comes in. The accelerometer may be signaling a speed-up, but the software knows that the gyroscope has signaled a 180° turn, so it knows to interpret the new accelerometer data as a slowdown.

And now the routine starts. I’ll focus on highlights rather than the whole routine in order to save space (even though we all know that this is just an excuse for the fact that I have no clue what I’m doing when it comes to putting together a winning – or losing – routine). The highlights must feature, of course, at least one of each of the basic moves: skating (OK, we’ve covered that), jumps, spins, and spirals. And a grand finish that both appears humble and declares, “Here I am, b**ches, deal with me!”

The first move we’ll look at is pretty basic as she moves into the classic camel spin. Called that not because anything about it resembles a camel (to my eye, anyway), but rather because… someone decided to call it that. One leg is outstretched, arms more or less by her sides, tilted to the side. As she moves over, the sensors on her head register both acceleration towards the ground and rotation about the x axis, so-called “roll.” And from there she starts to spin, or yaw. And it makes me glad that sportscasters don’t use the word “yaw.” Please don’t tell them about it. They’ll turn it into something like, “She’s yawifying something terrific!”

The sensors on her head and outstretched legs are now registering constant acceleration in whatever direction they’re not going and a concurrent change of facing direction. The ones on her standing foot indicate no acceleration but continuous spinning, as do the sensors at the center of mass.

She comes out of the spin and accelerates backwards, leaning back to glide in a circle. All sensors register the circular motion, with those on her head indicating a slightly tighter radius than those on her toes.

Now she lines up to do a jump. Her first move is a toe jump, so most of the sensors show her accelerating, going vertical while still moving forward, spinning several times, and landing with instantaneous vertical deceleration as she hits the ice and comes out of the spin. But the sensors on one of her feet register a sudden deceleration as she jams that foot to start the maneuver.

As she moves into a spiral, she extends one arm out to the side and, with the other, reaches back to grab the raised leg. As the elevated foot moves forward, it’s accelerating faster than the rest of her; as the arm moves back, it decelerates slightly relative to her center of mass. Once in position, all sensors register the same motion, much as they did when was leaning backwards. The NFC capability accompanying the sensors on her hand and foot exchange phone and email information and decide to do lunch sometime soon.

She next attempts an edge jump, in which, to the untrained eye, everything happens just as it did with the toe jump, except that there’s no deceleration on the launching foot. OK, realistically, the untrained eye (mine in particular) wouldn’t even notice the initial toe jam, except that the sensors told us it happened. So the fact that she can now launch off of an edge looks like magic, except for the slight vertical descent on her push foot right before she rockets into the air.

Unfortunately, she doesn’t land this one so cleanly, and all the sensors register a rather chaotic trajectory as she tumbles onto the ice and recovers her pose and composure. It’s hard to make sense of the sensor signals, but all register a rather incoherent set of hard decelerations.

In these times of increased security, we have also thought ahead to instrument our skater with a magnetometer. While it can help to re-orient the system if the gyroscopes get dizzy with so much spinning (with tilt compensation working double-time), it has an extra feature for us: detecting magnetic anomalies. Like anyone carrying too much metal and coming on the ice, like, hey, who’s that guy and why is coming towards her? And what is that thing he’s holding? The magnetometer is going crazy! And security rushes on and grabs him, and she swoops around the other side of the rink, and, to the audience, it was all an elaborate part of the routine.

The unplanned excitement over and the rest of her moves completed, she moves towards her final position in front of the judges and goes into a final spin with arms outstretched, pulling them in to speed up the rotation. The sensors on her head and center of mass register rotational acceleration but no linear movement; those on her arms show both linear and rotational acceleration, except, wait, that one has stopped accelerating. Huh? Oh, one of the sensors came loose and has flown off along the tangent line towards the audience. Some lucky watcher can take it home as a souvenir. Or maybe they’ll just swat it away thinking it was a mosquito. Miniaturization will do that, you know…

And she finishes, dropping down to the ice, head bowed, as if about to be knighted, to thunderous applause. The sensors can finally take a deep breath and wipe their brows. And the rest of the job falls to the judges.

Actually, really sophisticated fusion software could take the place of human judges, detecting the various jumps and moves, assigning difficulty points, and evaluating execution. Of course, it probably couldn’t take into account the other necessary factors – such as who was supposed to win or which country we’re mad at now or whom we’re tired of everyone loving.

Hmmm… perhaps someone needs to invent a snark sensor or a social senses sensor (which many of us in engineering-land would pay extra to use) and include that in the sensor mix.

**Yes, I know: the sensors can’t think. They just put out information, and the software does the thinking. Work with me here…