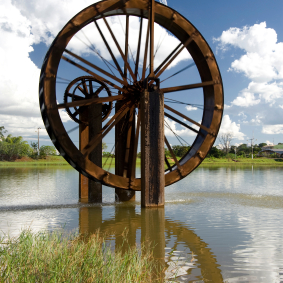 These days, more and more people talk about getting off the grid. It’s a hard thing to do, and if you’re really going to pull the plug on your local utility, you’ve got to be prepared to sacrifice. For better or for worse, the utilities are more or less reliable in their delivery of power (except when they’re not); other sources (aside from simply running a generator) are less so.

Most people like to stay connected just to hedge the bet they’re making, pulling power from the grid only when necessary. Problem is, they typically then rely on one alternative source – like solar – to take care of their energy needs. Imagine instead a not-so-large plot of flat land with a stream running through it. You could put up solar panels for sunny days, put up a windmill for windy days, and use a waterwheel to generate energy from the moving water in the stream.

Of course, not all days are sunny or windy. And, especially in the West, streams tend to run low or even dry in the summer, coming back to full force in the winter. So you really need these things to supplement each other. Which means connecting them all somehow so that they can each contribute a share.

Now imagine this setup, only shrunk down to a size that can power a remote sensor on a wireless node. This is a project that was recently published by Saurav Bandyopadhyay and Anantha Chandrakasan at MIT, and the idea was to manage multiple harvesting sources in a single device. Granted, there was no stream running through their die, but they combined power inputs from a thermal generator, a photovoltaic cell, and a piezoelectric generator so that they could harvest from temperature differentials, light, and vibration, respectively.

As with any power-generation project, the main goal is to be as efficient in power gathering and delivery as possible. And when you’re a research university, that means doing it better than the last guy. These guys attacked the problem on multiple fronts.

The first step they took actually had nothing to do with the multiple sources, but rather with the efficiency of power conversion even from a single source. The normal way of handling power conversion is to have two stages. The first delivers the harvested power to intermediate storage; this stage must be impedance-matched to the harvester for optimal power extraction. Following storage is a second converter that delivers regulated power to the load. This is optimized by matching the needs of the load.

The problem is that each of these stages involves some loss, and two stages lose more than one stage. So instead, they devised a dual-path approach whereby, when the generator is able to meet the needs of the load, then the first converter drives it directly. When either the generator slacks off or the load gets heavier (since both can change over time), then it switches over to the “backup” path and the storage drives the load through the regulator. 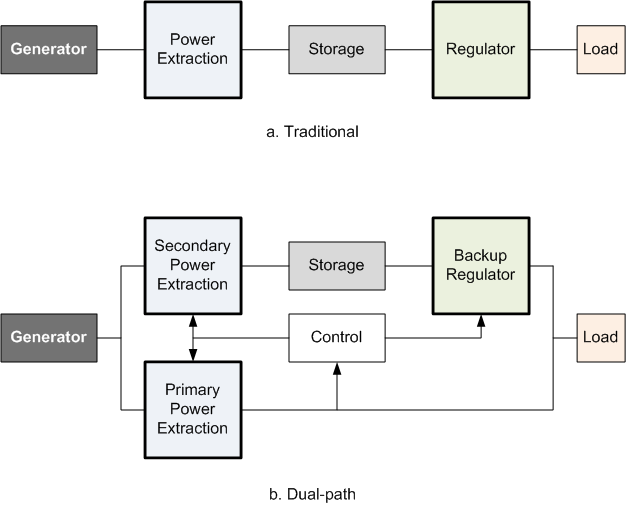 Likewise, if the voltage from the generator gets too high (since it’s unregulated), then it’s switched onto the backup path to charge up the storage. So the primary path really functions only when the voltage is within a narrow range (there’s some effective hysteresis there, with an additional time delay before the backup path kicks in). Outside that range, the storage is being either charged or depleted.

Now take this approach and figure on three different generators. Each of the types chosen operates with different voltages and impedances. According to the team, thermal generates between 20 and 150 mV through 5-10 ? on one end and piezoelectric generates from 1.5 to 5 V through 10-100 k? on the other; solar falls in between. Because the first stage for any of these needs to be impedance matched, you can’t simply hook these things together. And the piezo harvester generates AC, which has to be rectified.

The regulators are DC-DC converters, so impedance matching is handled by tuning the switching frequencies so that the voltage divided by the effective average current gives the right impedance. Even for just one harvester, when devising the dual-path details, the optimal frequency for a single traditional converter had to be divided between the primary and secondary converters so that they summed to the right frequency. But now there are three different harvesters with three different impedances to worry about.

At least with the thermal and piezo ones, they’re pretty much stable, so, once established, the frequency stays consistent. But the solar harvester isn’t so simple, as changes in illumination and the non-linearities of a shunting diode mean that the optimal operating point may change over time. While there’s an analytical way of determining the optimum, building that into a real circuit is hard, so it’s easier to use a feedback control path.

Things at this point get into the involved intricacies of the boost (or buck-boost) converters being used – particularly with respect to the two clocks. One of these clocks determines the impedance, but the other must also be adjusted to keep things working efficiently. A time-based power monitor and so-called Hill-Climbing Logic provide dynamic adjustment of the clocks to keep the solar harvester working at peak extraction.

Having done all of this, there’s one more problem: the final configuration involves an inductor. Inductors are big and expensive; it would be nice to use just one instead of requiring one for each harvester, as would typically be needed. They managed this by using a switch matrix that swaps around which harvester is connected to the inductor at any given time. 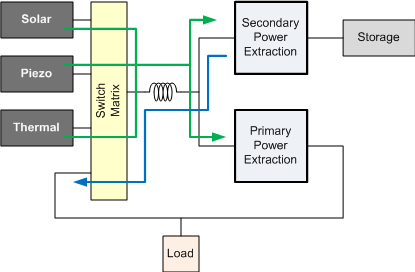 Figure 2. Over-simplified view of inductor sharing, with green paths showing the harvesters providing power and the blue path showing the storage filling in as needed.

They were able to do this by time-multiplexing the harvesters. This is possible because the DC-DC converters operate in discontinuous conduction mode, meaning that each of them has some idle time. That idle time is enough to allow the interleaving of the three harvesters without compromising the timing (and hence power extraction) on any of them. Even the storage, if it is needed to drive the load, gets a time slot. A pattern generator creates the clock signals, with each harvester getting its optimal clocking.

They claim their approach has achieved 11-13% greater efficiency than prior attempts to do this (which involved things like stacking the capacitors from the different harvesters to add the voltages or switching between the harvesters according to which was contributing the most).

So, while this isn’t a commercial offering, it raises the likelihood that some lonely sensor way out somewhere, connected only by electromagnetic shouting distance to the rest of the world, will have more than one way to generate the power it needs to keep going.

One thought on “Hedging Micro-Energy Bets”