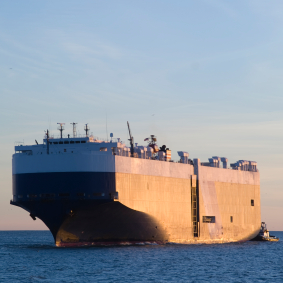 Last year I covered a small local company run by Adam Wegener that makes small, portable speakers that appeal in particular to youthful types. Called TrashAmps, the speakers are housed in re-purposed soda or beer cans.

The issue last year was whether their message of sustainability could command a price premium or whether, instead, they’d have to go offshore to compete, potentially sacrificing their sustainability message and differentiation. I had promised to revisit the situation in a year, and so I have. And I got some surprises along with the not-so-surprises.

You’re probably thinking already, “Let me guess: he went offshore.. Wet-behind-the-ears dreamer meets reality and drops his idealism in order to make money.” And my response to that would be, “Yes and no.”

Yes, he did go offshore. I can’t speak to his internal state with respect to dreams and idealism, but it’s not as simple as punting on sustainability in order to make money. Sustainability turned out to be way more complicated than he thought. While much of what he deals with might not be specifically about the circuits themselves, it is interesting to see the considerations that go into his decision of how to run a business that sells electronics. In particular, it shows the power of doing what might be called a complete sustainability inventory.

As a review, his original concept was to build a product locally that reused as much material as possible. The can was one example; the packaging was also formed out of existing trashed packaging materials. The speakers came from China; with no alternative source, there was no choice on that one. But the boards were built locally, with final touch-up soldering done by him.

The decision at hand was whether to have all of the work done overseas, offshore the whole thing. The conventional thinking would be that, because it’s not local (this has nothing to do with creating jobs), it has a larger carbon footprint. That thinking turns out not to be right.

The critical matter here is that the electronics and various other parts come from China anyway. Each of those pieces was shipped to the South Bay for him to assemble. Shipping the final assembled units from China, rather than all of the pieces, creates less of a carbon footprint. Yes, those pieces still may be shipped between factories in China, but that’s far less of a distance, obviously.

The other aspect of this is packaging. He has tried hard to reduce packaging, but he can’t control the packaging of the pieces sent to him. And there’s lots of packaging material. Take the plugs: each plug is put in a separate bag; ten of those are then put in another bag, and that bag goes into a box. So much for reduced packaging. In fact, even though he was reusing packaging materials to create his own packaging, the stuff that got shipped to him created far more material than he could reuse.

But the alternatives aren’t easy. The process of cutting the tops off and inserting the speakers is something they currently do here, but that doesn’t scale well. He also thought about simply sending the unassembled speaker to the customer with instructions for them to take a can of their choice and finish the job themselves. But there’s that bit about cutting off the top, which isn’t moron-proof, but even morons probably have lawyers, and… well, yeah: you can guess the rest. Not an appealing option.

Let’s move next to the plastic housing. When built here, it is constructed out of sheet plastic, which isn’t recycled. In China, injection molding provides a cheaper alternative. But, in addition to the cost benefit, this means that they can also specify the use of “regrind” plastic: plastic that has been recycled and ground into powder for reuse. And that reduces the cost yet further.

Of course, when one uses contractors in far-away lands that you don’t know personally and that are managed by some firm in the US, well, all those levels of indirection might make one suspicious that you’re being promised things that aren’t being delivered. Is that housing really recycled plastic? Can you really tell? Fortunately, Adam has a friend that can test it to confirm. It’s easier to trust when you have a way to verify.

The other thing he noted is that China (and Asia in general) is more accepting of recycled plastic than we are here. For example, we need our water bottles to be pristine clear to prove how pure the (tap) water in them is. Adam says that, over there, the water bottles may be streaky or have different colors because they’ve been made out of recycled plastic.

Moving on to the packaging: they were using old plastic strawberry clamshell boxes at first to house the speakers. That’s great from the standpoint of reusing old packaging, but they weren’t strong enough by themselves for shipping, so they had to ship them inside another box. Once at the customer, the clamshells also weren’t strong enough for the customer to use to take them to parties or camping or whatever, so the packaging would be discarded after shipping. 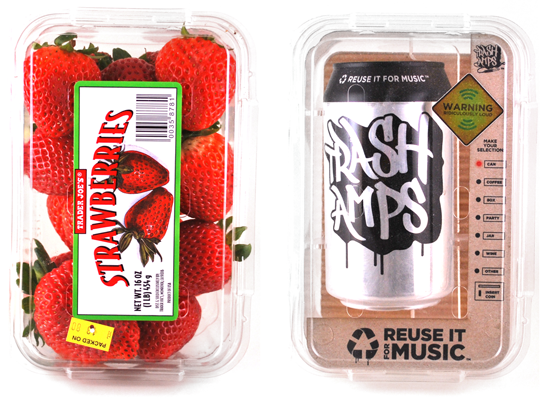 “But wait,” you say. “Those clamshells are recyclable, so at least they’re not going into the landfill.” Well… maybe. Adam did some research on that as well. Turns out that, yes, technically speaking they are recyclable. That doesn’t mean that they’ll be recycled, however, even if you put them in with the recycling. It turns out that different towns and counties and agencies have different agreements on what gets recycled. To hear it described, it’s almost less about how hard or easy it is to recycle, but rather the trash-collecting politics of, “Well, our contract doesn’t include that, so we’re putting them into the landfill. Unless you want to pay us more not to.” (That’s my interpretation, to be clear, but, at least to my cynical ear, that’s the only thing that sounds likely.)

So in many cases – most cases? – those clamshells are going into the landfill after they reach their destination.

So Adam changed tacks and went with cardboard tubes instead. These could have printing put directly on them, making separate paper instructions inside unnecessary. They’re also strong enough to be reused by customers, eliminating waste at the receiving end, and, even if they throw it away, it’s much more likely to be recycled. Yes, they’ve stopped reusing the clamshells, but all that’s really changed is that, instead of them going into some landfill at the customer site, they go into a landfill somewhere near here. There’s no net change. (And less shipping.) 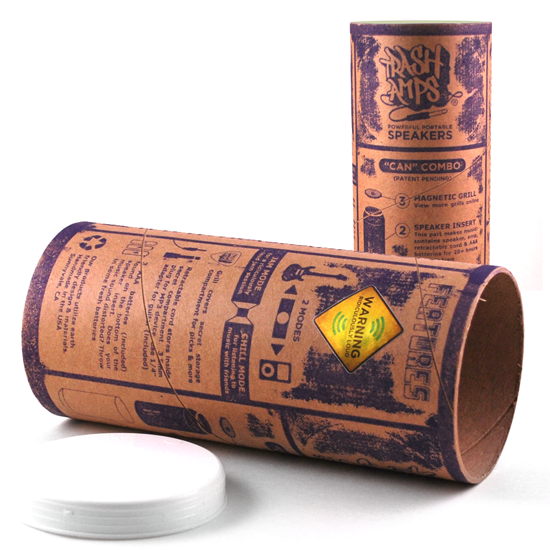 Then there are the endcaps for the cardboard tubes. Here in the US, they would buy those new. Out of virgin plastic, of course. In China, the contractor will make the endcaps – out of regrind plastic if so specified.

Much of this packaging discussion relates to the fact that they currently do internet sales only, so it’s all about shipping to the customer. But they’ve got some interest from retail stores as well – they may need clear packaging for that. He hasn’t sorted that angle yet.

Of course, as we alluded to in the first article, there is also the issue of business sustainability. As Adam relates an adage related to him, “Successful businesses sell product.” People can love what you make, they can respect how you make it. But if they won’t actually buy it, the rest doesn’t matter. And pricing definitely figures into their customers’ decisions: $50 is more than many people want to pay, and the costs underlying that price don’t even include a salary for Adam.

So yes, they’re going offshore. But, for all the miniscule reasons we’ve seen, that might be the more sustainable solution because things can be done there that simply aren’t possible here. It’s easy to wave this all off as simply a complicated rationalization for a simple decision to make more money. But it’s hard to argue with the details. In this case, local seems less sustainable than offshore.

Right now, Adam is planning to raise money through a Kickstarter campaign – a crowdsourcing investment approach. The campaign will start later in August; he hopes to have the new units for sale by October.

2 thoughts on “Does Local Mean Sustainable?”