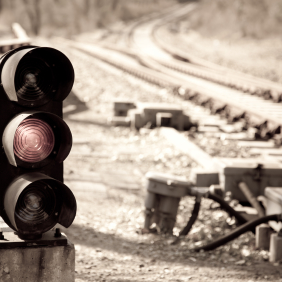 Light has always been a finicky physical phenomenon. It seems all straightforward until you get to high school and learn about how Einstein burst our naïve bubble by positing light as a jealous god that brooks no competition in the race between here and wherever.

And then there’s that shape-shifting thing it does, “Look Mom, I’ve a wave! Ooo, now look: Ta-daaaa! I’m a particle!” That has put a permanent end to the days of blithely placing maple leaves over photo-sensitive paper to create a facsimile that can be tacked to the refrigerator. Much as the centipede trips over itself if it actually tries to think about the algorithm that orders which leg moves when, nothing about light can be simple anymore now that our age of optical innocence has flickered out.

It has certainly put something of a damper on our ability to design systems that take advantage of light. How we might do that depends on what we might want to do; so far, there’s no practical general solution that will take on all comers. A while back, we took a look at what Synopsys was doing with their optical design tools, and we saw that they had two different tools: one for the specific problems involved in designing lens systems and related kinds of optics (Code V) and one for more general illumination problems (LightTools) (both of which solve more sophisticated problems than the simple tools that might be used to design the lighting in buildings or figure out which of your garden plants will get full sun and which won’t).

The first of these two tools is more focused (if you’ll forgive the choice of words), making a variety of assumptions that the more general tool can’t make, speeding up the modeling calculations while limiting the range of application. But in both cases, they’re examples of “ray-tracing” kinds of tools. You’re more or less treating the light as a particle (a ray being the trajectory of a particle and the preferred ballistic embodiment, since it’s far more intimidating when loaded into a weapon brandished by some muscular dude in multicolored tight spandex with a scary looking mask and a cape than, what? A particle gun?? Come on, that just sounds like a watered down pellet gun…).

Treating light as rays is in itself a simplifying assumption that, of course, doesn’t always apply. In fact, it specifically applies only if the features being modeled are very large as compared to the wavelength of the light being modeled. In the case of Code V, for example, the lenses are at least 100 times the wavelength of the light (and easily larger by far than that). But, as we bring the feature size down, all kinds of things change, yielding not only new ways of modeling light, but, possibly, actual new things that we can build.

With the tools used to monkey with light (or to model how light monkeys with things), ray-tracing kinds aren’t as accurate when feature size drops. Now you need to deal with light as a wave. Once you do that, you can start to figure out how the light works in the presence of really small features or how it travels through a waveguide or how it moves through materials instead of through free space.

Even so, doing full-on calculations involving light is extremely time-intensive, so tailoring specific tools to specific issues helps to circumscribe the problem, simplifying the solution. This is what RSoft had done with its tools, and this was the basis for Synopsys’s acquiring them some time back. The kinds of components that the RSoft products enable include:

Part of the process of “making assumptions” involves how the modeled geometries are described. So, for example, Code V thinks in terms of stacks of lenses and other such light-bending and -transmitting and -reflecting components. LightTools, by contrast, is a more general CAD tool that makes far fewer assumptions and therefore needs a more general description of the geometries it’s modeling.

The RSoft tools might seem similar to Code V, but they generalize to layers of material. That’s because Code V assumes free space, whereas the RSoft tools deal better with engineered materials formed from layers of different materials with varying transmissive or reflective properties, figuring out what happens as the light impinges on the layers and goes through them – or not.

As to whether or not integration of the optical tools with silicon capabilities – either by combining outright or coordinated hand-offs – for the purposes of integrating light-conducting components onto silicon, there’s not really much of a market there right now. Most equipment and tools are being sold into research labs – a rather limited market. And it’s not clear to Synopsys how many of the users will be coming to them looking for new capabilities.

They see much more promise in the area of networking. It’s not so much because this technology is on the cusp as much as it is that these new (to Synopsys) tools are used by designers of new (to Synopsys) kinds of systems, so it’s fresh business for them. To be sure, the companies that would be their RSoft customers appear to overlap largely with the customers they currently sell to, but the groups within those companies are likely to be different, making this an accretive acquisition (a word the money people love to hear).

The process of integrating the RSoft technology appears still to be in progress. There remains a separate RSoft website, and the tools are pretty much as they have been. But the Synopsys page that deals with the RSoft aspect of their optical tools division talks in terms of the acquired technology making its way into the Code V and LightTools products. Judging from that, it would seem that a distinct RSoft brand of tools may or may not go forward. It’s possible that they could be subsumed into the other tools. If that is indeed what’s going to happen eventually, it doesn’t seem imminent.

One thought on “Beyond Free Space”