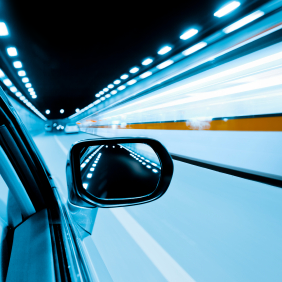 MOST, Nvidia, Spansion, and Other Stories
by Kevin Morris

Modern automobiles are miracles of engineering refinement. Probably no other technology-related product calls from as many disciplines, has endured the same level of long-term evolution, has been actively used by more people, and has seen such steady long-term progress in capability, safety, and efficiency as your average family car. Each year, car companies take mountains of data and user feedback and pipe it into their engineering process, which results in an evolved, improved, safer product – most of the time, anyway.

However, the technological advancement of the automobile is a bit paradoxical, particularly in the area of electronics. While modern automobiles are stuffed with complex electronics, the long lead times for design (typically five years or more) means that the latest-greatest car hits the dealer showrooms with electronic technology from six or seven years ago. Witness how many automotive entertainment systems still featured audio cassettes long after the majority of the world had moved on to CDs, and how still so few autos provide workable facilities for newer consumer technologies like portable media players.

A recent Audi ad campaign boasts that the car is capable of making “over 2000 decisions per second.” Uh, Hmmm… My 1978 Radio Shack TRS-80 could beat that – running interpreted BASIC. Maybe that’s not really the best boast for a 2012 car. On the other hand, the average car now contains somewhere in the range of 35-80 microcontrollers. With all those compute engines flying in loose formation, we immediately are faced with the need for them to talk to each other. In most cases, car manufacturers have been working for the past several years to turn autos into rolling local area networks.

These networks are not without their problems, however. For years, automakers have relied on CAN (Controller Area Network) – a low-speed serial bus designed specifically for automotive applications. CAN solved the immediate problem of nightmare wiring harnesses in cars – where every variation on the car required different wiring harnesses with point-to-point connections for each pair of interconnected devices. However, the speed and lack of robust safety-critical features in CAN left plenty of room for subsequent improvement and replacement. More recent attempts at faster, more reliable networks like FlexRay have seen little adoption, and it is possible that good old Ethernet may end up being the standard networking protocal in your car as well as everywhere else.

Today, the MOST Cooperation, the standardization organization for the leading automotive multimedia network Media Oriented Systems Transport (MOST), announced that automotive Ethernet via MOST is rolling into our cars. This allows Ethernet protocols to be added to the infotainment-related audio and video protocols already supported by MOST. This is one step in the direction of media-related networking stepping over the divide into safety-critical areas like driver assistance. With Ethernet running around our cars, perhaps more commodity consumer devices will be able to play in the game as well – allowing portable devices to better leap over the vast lead times of automobile engineering lifecycles.

While the opportunities for computing in automobiles are ample, the problem has been addressed mostly ad-hoc by a big collection of microcontrollers, each working alone on a single problem. That approach may put a lot of MIPS into a typical car, but it does not allow for some of the truly amazing capabilities we can get by taking advantage of modern computing power. While microcontrollers can do a fine job with anti-lock braking, engine management and control, traction control, climate control, and other commonly available features and functions, we need a LOT more computing power for anything involving machine vision, 3D information display, and other mega-computations.

Fortunately, a variety of suppliers are bringing innovation into the automotive space that will address many of these problems concurrently. FPGA companies have attacked the automotive sector with automotive-specific versions of FPGAs that promise many advantages, including reducing the design-in cycle (allowing hardware changes to be made even after the car is deployed in the field), flexibility of use for multiple variants of the car (where features can be added or removed from the FPGA while the same board is used in all variants), and compute acceleration for challenging problems involving signal and video processing. FPGAs can flexibly address the many networking challenges in the auto as well – providing the ability to bridge between multiple networking standards and protocols.

Recently, even some PC-centric semiconductor companies like NVIDIA have jumped into the automotive fray. The same technologies used in computer graphics acceleration turn out to be handy for automotive applications like 3D rendering for advanced virtual instrument clusters and “infotainment” features like 3D GPS/Navigation rendering. However, the real payoff with advanced compute acceleration will be in the “driver assistance” realm, which has the potential to increase automotive safety dramatically. Capabilities like lane-departure detection, adaptive cruise control, traffic sign recognition, driver alertness monitoring, blind-spot monitoring, assisted parking, and “augmented reality” features like night vision and heads-up displays could work together to protect us against the weakest link in the automobile safety chain – the driver.

Earlier this month, flash memory supplier Spansion announced that they were partnering with NVIDIA to deliver their Spansion GL NOR flash memory in the package with NVIDIA’s Tegra automotive processors. Packaging high-performance non-volatile memory right with the applications processor solves a number of problems for automotive designers, including reliability, board complexity, and memory subsystem bandwidth. Having pre-matched, pre-tested non-volatile memory encased in the processor package makes integration a lot simpler and development of applications a lot more straightforward.

We are still years to decades away from the autonomous, self-driving car (although Google has made considerable headlines with their experiments in that realm). In the meantime, though, many of these flexible, programmable device technologies will help shorten the delay in bringing advances from the rest of the electronics world into the venerable automobile. High-end cars are already boasting features like adaptive cruise control, automatic parking, and rudimentary collision avoidance capabilities. It won’t be long until those features trickle down into the mainstream and all of us will be a little safer on the road.

2 thoughts on “Back Seat Driving Innovation”