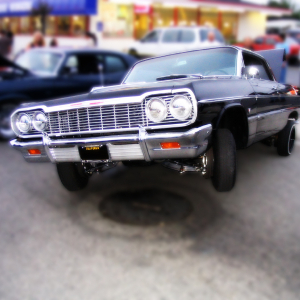 A Tweak of the Ears

You’re sitting in your living room reading a book. Your ears are “on” and working, of course, but you’re not really using them. You’ll perk up if some interesting audible signal comes into range and interrupts your reading process.

And, sure enough, your ears pick up a car approaching along the street with windows open and music playing. And you think you might recognize the song. Without thinking, your head turns a little to the left so that your left ear is positioned more directly towards the street as the car comes abeam of your house.

The car continues on and your head turns slightly to follow it until the sounds of the car are blocked by the neighbors’ house. But then the car passes the empty lot beyond the neighbor, and the music crosses that lot and bounces back to you via the house behind yours; now your head rotates a bit to the right so your right ear can hear it coming from the opposite side.

Signals change. Or perhaps the environment changes. The signal source is moving, or maybe you’re moving. Or maybe you’re both stationary but other things are moving. Or the tree branch is blowing in the wind. Or it’s sunset and the ionosphere is changing.

Whatever the cause, signals change. Or, more precisely, the conditions of the signal channel change. And there’s no one right direction to face or noise to filter that will always guarantee the best reception. As is painfully clear with your mobile phone.

That’s one of the things MEMS producer WiSpry is out to help correct. Actually, it’s not really fair to call them a MEMS producer – they’re not a foundry; they just happen to use a CMOS-compatible MEMS process to build their solution to this problem.

What WiSpry makes starts out fundamentally as an array of tunable capacitors. These are parallel plate caps with one fixed plate and one movable plate; an array can provide a wide 20:1 range of capacitance values. Their initial product has 64 actuators that do the tuning; each cap can be individually adjusted.

All of the caps have RF terminals that are accessible during package bonding. They can be accessed individually or ganged together; how these are bonded (or not) depends on the specific product being built. While internal inter-wiring is done by wire bonding now, it may be handled by a redistribution layer (RDL) sometime in the future.

The idea, then, is to use this capacitor array to optimize the RF subsystem in real time on a mobile device as conditions change or as the phone changes modes or channels. Instead of building in several static filters that will be chosen – and then remain static – for different modes, a single variable filter subsystem can do it all.

When simply optimizing for changing conditions, what this really reflects (pun intended) is a need to monitor impedance changes in the channel and then, for example, to change the internal impedance to cancel out or correct any mismatches that might cause power to be reflected internally rather than being transmitted.

From a system standpoint, something needs to examine the environment and then cause filtering adjustments in order to optimize signal reception and transmission. The question is, where does the rest of the work of figuring out how to set the caps get done? Right now, the baseband processor receives data from sensors and does the calculations using WiSpry algorithms, instructing the WiSpry chip as to any adjustments needed.

This means the circuitry on the WiSpry chip is minimal: an interface to the baseband processor plus a charge pump to generate the 35-V signal needed to tweak the caps. The capacitors are voltage-actuated so that they don’t draw any current except when they are being adjusted.

From a MEMS processing standpoint, this is a relatively low-maintenance device. The only critical parameter that has to be monitored is the stress in the films. The CMOS circuitry is built over the top of the cap array; the caps are sealed and released in the MEMS fab, and the circuits are then created as with any other wafer, although they’ve been careful with shielding to eliminate any parasitic interactions.

This places a minimal amount of intelligence in the adjustable filter chip, with most calculations and all decisions being handled by the baseband processor. But there is more that could be done if the CMOS content in the chip were increased. In particular, WiSpry’s Jeff Hilbert says that some customers are asking them to do additional sensor data conditioning before feeding the results to the baseband processor for the final decision as to what filter changes are needed.

But there’s other logistical work that has to be done as well. These are mechanical devices, and so there is a wear-out mechanism as minute contaminants migrate under the plates and cause “stiction” – essentially, static friction at a molecular or atomic level that prevents (or impedes) movement. Mr. Hilbert claims that it takes billions of operations for this to be an issue. The intended lifetime is at least 5 years.

Even once wear-out mechanisms start to kick in, it’s not like there’s going to be a dramatic, catastrophic failure: it’s a “soft” or “gentle” effect. In many cases, the failure of one cap might be compensated elsewhere. Even if not, the system will keep performing; it will just be operating a bit less optimally, and that deviation will slowly grow as the device continues to wear rather than falling unceremoniously off a cliff.

They also extend the life of the devices using wear leveling, much as is done with non-volatile memories. This spreads any wear-out more evenly amongst the entire array of capacitors, all of which last longer, rather than compromising the entire device earlier based on the overuse of a few caps.

So it’s unlikely that the baseband-processor-in-the-loop will be eliminated. The WiSpry chip may do more environmental evaluation and more of its own housekeeping, but the baseband processor is likely to remain the boss.

Of course, this oversimplifies the various applications they’re trying to address, as if they could all be managed by a single device or family. In fact, they have a number of different products, starting with the tunable RF circuits, moving on to tunable digital capacitor arrays and tunable impedance matching networks, and with a subsequent eye towards tunable filters, duplexers, and power amplifier tuners.

So as you sit on the couch adjusting your ears for best music reception, your phone may be simultaneously adjusting its antenna for best signal reception.

One thought on “A Tweak of the Ears”