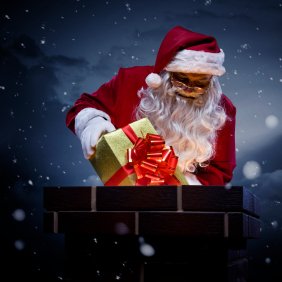 Santa’s Been Good to Embedded Developers

This year has been a good one for embedded hardware engineers. There have been a ton of new chips, for starters. I mean, a ton—a huge selection, a plethora, a USDA butt-load of new chips. We are dealing with an embarrassment of riches, my friends.

That’s a good sign, because it means the chip companies are feeling secure enough to crank out new products for our delectation. It also means we get a lot of new choices. So many, in fact, that we’ll probably never be able to adequately evaluate them all. Oh, well. That’s what advertisements and PowerPoint slides are for. Woo me, Mr. Chip Salesman.

Among the goodies in Santa’s pack this month are some new proximity-sensing chips from Atmel. “What’s proximity sensing,” you ask? Well, it’s like touch-sensing but cooler. If you really want the full Minority Report experience, you have to give up touch-sensitive screens and go for proximity sensing.

Atmel’s new QT2120 chips allow you to simply wave your hands in front of your user interface and it’ll detect your presence. Pretty cool huh? The technology isn’t quite advanced enough to tell exactly what you’re pointing at (at least, not with very fine resolution), so it’s probably best used as a “wake-up” sensor. For example, you could use it to tell when the user is about to pick up the device, and wake up the screen, processor, and other hardware. The gee-whiz factor of having a gizmo that automatically wakes up when you reach for it has got to be worth a few bucks, right? It will also save battery power because you can power-down your device whenever it’s not being used.

By placing three or more proximity sensors close together, you can tell which direction the user is gesturing. So you could, for example, build a touch-free “slider bar” that could tell whether you’re gesturing up or down, left or right, clockwise or counterclockwise. The possibilities are endless.

Over at Texas Instruments, they’ve pulled the wrapping paper off a collection of new Sitara AM335x processor chips. These are ARM Cortex-A8 devices that run at around 500 MHz, give or take 50%. Some chips even have Imagination Technologies’ PowerVR graphics controller, as well as a touch-screen interface, 1Gbit Ethernet, USB, crypto, and more. With prices starting at just $5, these chips are ridiculously cheap. (Of course, that’s high-volume pricing, but Santa always buys in volume, right?) You can even get a BeagleBone development system for just $89.

Even though you want Santa to make it through the chimney, you may still want a firewall around your embedded devices. Firewalls for embedded systems? You betcha, says Icon Labs. Malicious port sniffers don’t care whether they’re probing PCs or embedded devices; they’re just testing IP addresses looking for open ports or weak security. And since so many embedded devices are now always-on and Internet-connected, they’re just as vulnerable as anything else.

Icon Labs’ “Floodgate” software is specifically designed for embedded developers, and it runs on a variety of embedded operating systems. You get the source code and, with the license fee, a year of support and upgrades. Floodgate protects against a variety of Internet-borne maladies, including SYN floods (hence its name), security breaches, and brute-force attacks. It’s not an antivirus, which is both good news and bad news. A lot of developers mistakenly equate “network attack” with “virus,” and think they’re home free because their system isn’t running Windows, Linux, or MacOS. But there are probably as many embedded devices with IP addresses as there are “real computers,” so network security is something every embedded developers needs to add to his wish list.

Of course, to power all your new devices you’ll need some sort of AC adapter or battery supply. And today’s microprocessors usually require multiple voltages (at very tight tolerances), so that job gets tricky. Say hello to Enpirion, a company that makes “power SoC” chips for just that purpose. These are like itty bitty versions of the power “bricks” you often seen in larger systems or servers. Power SoCs achieve their small size (no bigger than a typical 14-pin IC) by using high-frequency inductors for switching. Small size is useful in its own right, but it also means you can place the power supply very close to the load, reducing inductive coupling and improving transient performance. Enpirion’s Power SoCs also give off very little heat, so you can squeeze ’em into tightly packed systems.

Next year, if you didn’t get all the gifts you wanted, you can still ask Santa to bring you a shiny new Wi-Gig interface. Never heard of Wi-Gig? You will, and all the kids will be wanting one before long. Wi-Gig is the just-completed standard for high-speed Wi-Fi over 60-GHz spectrum. With up to 7 Gbit/sec peak bandwidth, Wi-Gig isn’t just a faster replacement for wires, it’s a wireless replacement for buses.

Wilocity, one of the companies beavering away on Wi-Gig silicon, expects the new standard to replace PCI, HDMI, and similar buses, in effect creating wireless systems. Instead of just having a cordless keyboard and mouse, you can have cordless disk drives, processors, and display adapters. System enclosures effectively give way to an “exploded diagram” type of system architecture, with high-speed subsystems located across the room from each other.

One of the many hurdles the Wi-Gig group had to overcome was the natural directionality of the 60-GHz broadcast spectrum. You see, normal Wi-Fi’s 2.4- and 5-GHz frequencies are naturally omnidirectional; they spray data in all directions. That’s normally what you want, but the downside is that they contaminate the airspace in all directions. Wi-Gig, on the other hand, is strongly directional. That’s dandy for keeping signals from interfering with one another, but it also means you’ve got to aim the transmitter directly at the receiver. Wi-Gig cleverly solves this problem by specifying a number of micro-transmitters grouped into a phased array. An automatic “search and locate” protocol allows Wi-Gig devices to discover each other and set up a narrow transmit/receive beam. If either unit moves, the phased array will follow it around, sort of the way cell phone towers hand off calls from moving phones. All very space age, and all very complicated. Look for the first Wi-Gig products late next year… just in time for your 2012 wish list.