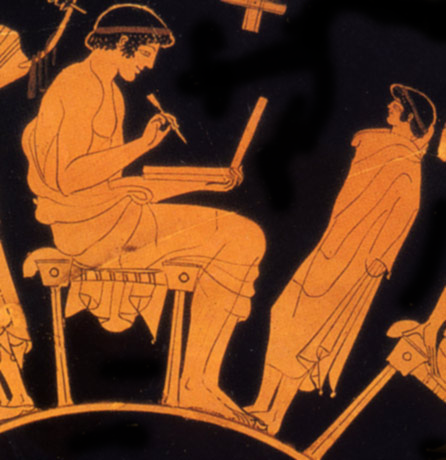 A New Angle on Old-School Writing

Atmel is Lining Up to Own Styli
by Bryon Moyer

Left-handers have been handed a disadvantage when it comes to Western scripts.

For right-handed people, you get to see not only what you’re writing, but also what you’ve already written, since your writing hand hovers over the blank portion of paper that you haven’t written on yet.

Not so for the left-handed. Their writing hand covers the portion they’ve just written, making visible only the mark being written at that very second. I’m assuming that’s why left-handed writers often position their hand in a way such that the pen comes down from the top instead of leaning to the left – at least you get a couple letters’ visibility.

Being right-handed, I haven’t been so inconvenienced. At least, until I started monkeying with other scripts. With Chinese and Japanese, for instance, you can choose left-to-right, like Western scripts, or up-to-down with columns starting from the right and moving left. But, in the latter case, you can pretty much see the characters you just wrote as you write beneath them; the only issue is smearing ink with the heel of your palm.

It gets more serious with true right-to-left scripts, as I found when trying to learn a bit of Arabic. Now I got to see how the other side lives over here: you never really appreciate writing visibility until you lose it.

In all of these cases, no matter how limited your view, you can at least see that portion that you’re writing, even if only that. So imagine what a hassle it would be not to be able to see even that, or at least not well. Such is the case with passive capacitive styli.

That’s one of the primary issues that Atmel is attacking with their recent ActiveStylus technology. With its 1-mm tip, it’s much more like a pen that you can see around – unlike a passive stylus, which has a tip on the order to 2 to 3 mm.

But why does a stylus even matter? And how have they done this?

Styli are poised to become a standard part of the user interface for various devices. Again. For those of you that used the early Palm Pilot devices, you will recall that any self-respecting PDA had a stylus. But they’ve largely gone out of favor – for some reason, people seem to think that fat fingers and thumbs somehow work better than a thin, precise utensil. Well, at least a finger is harder to lose…

And, of course, this all becomes more relevant with the proliferation of touchscreens. First in phones (the modern-day PDA) and then in tablets. There’s only so much you can do with a phone (despite the miracles everyone promises); tablets open up more possibilities, especially for artists, and, apparently, even Windows 8 will recognize a stylus as a standard part of the repertoire, as will Android 4.0.

But this isn’t about handwriting; it’s simply about the stylus. Let’s start with how they work and interact with a touchscreen.

The touchscreen is built with a number of layers. A non-touchscreen would have just a display layer and a glass cover layer. The addition of a thin film of indium tin oxide (ITO) allows for touch sensing. The nice thing about ITO is that it is conductive, and so it is useful for sensing while at the same time being transparent in thin doses, so it can go over the display without interfering with the display. This layer is what makes a screen a touchscreen (well, that and the touchscreen controller that interprets the touch events).

There are, by Atmel’s reckoning, three basic main stylus technologies today: inductive, passive capacitive, and active capacitive. The “best” performing type of stylus is inductive, but such styli need their own sensing layer, which goes under the display layer. This adds cost, making them less attractive for high-volume mass-market applications.

By contrast, capacitive styli can use the same ITO sensor layer that serves to detect your finger. This makes the screen cheaper. So what’s the active/passive deal?

A passive stylus simply has a material that will perturb the electric field around the sensor, much as your finger does. All information about contact with the stylus comes from the touch sensor itself. Because the effect being detected is relatively subtle, the stylus tip has to be large enough to be noticed. Hence their relatively bulky nature (while admittedly slim by comparison to a finger).

The ActiveStylus technology that Atmel is touting puts electronics in the stylus. This lets the stylus announce its presence, so it doesn’t need to be as big – that’s why the smaller tip. In fact, the stylus tip communicates with the touchscreen across the small gap between stylus tip and touchscreen sensor.

Stylus circuitry and a way of talking to the touchscreen provide an opportunity for more smarts and features. You can now have a stylus with a pressure sensor: while the touchscreen figures out where the stylus is on the screen, the stylus itself is reporting how hard you’re pressing. It can also have a tilt sensor and report the amount of tilt. And some companies like to provision their stylus with a button, so a button-press event can also be communicated.

All of which sounds good. But if you think in terms of doing actual handwriting on a tablet, stop for a minute and think about what is probably the most common stylus/pad out there: those point-of-sale pads where you sign for your credit card transaction.

Now admit it: has there ever once been a time when whatever it is you managed to scrawl on that thing looked even remotely like your signature? Hell, you could probably challenge every purchase you made in the last couple of years, and no one would be able to say that you really signed it.

There are lots of reasons why they come out looking horrible (not least of them because the dang thing hasn’t been maintained and isn’t working anymore and ok, whatever, just make a display of pseudo-signing so I can get to the next guy in line…). But I find that the biggest issue is that I can’t rest my wrist. So I’m writing with my whole hand floating in the air, using my gross arm motor skills instead of my fine wrist and finger motor skills. The result isn’t pretty.

So if we’re really going to be able to write, we’ve got to be able to put our wrists or palms down. And you know what happens when you do that on a laptop touchpad; nothing. Call it overstimulation or whatever; when the palm goes down, the pad freezes up.

It’s for this reason that Atmel is drawing particular attention to their “palm rejection” technology. This allows you to write with your hand in a natural, comfortable position without freaking out the machine. It’s not clear exactly what the details of this technology are, but, clearly, having a stylus that says, “Here I am” must make it a lot easier.

Atmel is jumping in aggressively here. They claim – reasonably – that equipment makers want a single stylus architecture for use both in handsets and tablets, and they seem to be trying to take that beachhead. You can’t mix and match screens and styli – the ActiveStylus technology works only with Atmel’s touchscreen controller, and the communication protocol between stylus and screen is proprietary. So when you marry the stylus, you marry the family.