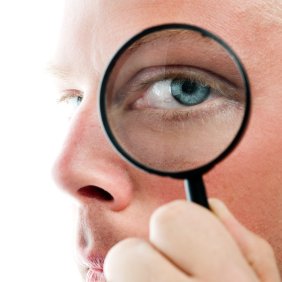 He Sees You When You’re Sleeping…

Evil geniuses and aspiring global overlords, your prayers have been answered. It’s now easier and cheaper than ever to keep tabs on your legions of subservient minions. From the safety of your secret lair in the hollow volcano, technologies like personal tracking, GPS, and location-based services are yours for the taking. Cackle away, master.

A case in point is a company called Spime, which has just updated and improved its SUPL (secure user-plane location) software. SUPL follows the Open Mobile Alliance’s recommended approach for passing user-location data over a wireless IP network, thus making your planned global deployment of personal tracking easier than shooting deathrays at do-gooders.

Spime (it’s the word for a theoretical physical particle, or maybe just the plural of spume; it’s also eMIPS backwards) also makes MapMan, a software platform for gathering, sharing, and monetizing “social location functionality” with cloud-based services, whatever that is. MapMan comes in 19 different languages and covers 100 different countries, so world domination is well within your grasp.

Meanwhile, on the other side of the world, competing company Telmap offers similar products, including its Mobile Location Companion, location-based advertising, and location-enabled social communities. Both firms offer these and other “white box” LBS (location-based services), meaning they’re designed to be embedded into other people’s products, be they smartphones, cars, tablets, or adamantium obedience collars. Hardware companies like Trimble and Garmin offer the same thing for hardware designers: private-label GPS modules or subsystems that location-enable embedded systems.

Of all these firms, Telmap is interesting because it was just acquired by Intel. Given that Telmap is a software company, that doesn’t mean Intel will start including GPS receivers in its chips—at least, not that they’re telling. Rather, Intel’s plan is to add Telmap’s LBS offerings to its own “Intel App Store,” officially known as AppUp. The idea is to make it easier for embedded developers using Intel chips to grab hold of high-level GPS-related middleware and applications, thereby speeding their time to market. GPS code is not something you want to develop from scratch on your own; having a source of ready-made software means you’re just a Persian cat and a monocle away from global supremacy.

GPS technology is a double-edged sword. On one hand, it’s enabled a whole class of new consumer electronics, such as in-car navigation systems. It’s cheap enough and prevalent enough that any decent smartphone can tell you (or anyone else) where in the world you are. GPS has rendered nearly obsolete such quaint technologies as lighthouses, sextants, and celestial navigation. Also map-reading; many young drivers can’t follow a map that doesn’t move and tell them when to turn. GPS-enabled cameras can double as tour guides; they know you’re taking a picture of the Eiffel Tower (for example) and provide audio commentary or recommend a local café. Anti-hijacking devices for cars can report when they’re stolen and where they’re being driven.

On the other hand, location-based services can easily take a creepy turn. Just last week, General Motors announced that its cars equipped with OnStar navigation systems will report your whereabouts all the time, even after you’ve canceled the monthly service and might reasonably expect the GPS surveillance to be turned off. GM swears it’s using the information for good, not for evil, but what is the company’s goal? GM must see a revenue opportunity in this—either for itself or for somebody else—or it wouldn’t bother tracking and storing your driving history.

Then there’s a gray area. There are GPS-based car trackers aimed at the parents of teenage drivers. Hide one of these little black boxes under the car and it tracks Junior’s location, speed, and direction. Should your teen stray outside of his parentally defined map zone (called “geo-fencing”), you get a text message or pager alert. Car’s moving too fast? Another alert. Spending too much time parked on the wrong side of town? Mom and Dad will know.

Rental car agencies have been known to use similar devices to track their inventory’s (and their customers’) whereabouts. More than a few surprised renters have been hit with extraordinary bills because they drove out of state, exceeded the speed limit, or violated some other codicil enumerated in the fine print.

Like any technology, a GPS device itself is amoral; it’s neither good nor bad. The ethics come down to how it’s used. The U.S. courts are dealing with the question of whether it’s okay for law?enforcement personnel to hide a GPS tracker on a suspect’s vehicle. Is that a warrantless invasion of privacy or simply good observation? How is it qualitatively different from watching someone walk down the sidewalk or following him in another vehicle?

Privacy is a funny thing, and a subject better left for another week. Our modern concepts of privacy and anonymity are really quite new, having existed only for the past hundred years or so, since the Industrial Revolution and the mass migration to large cities. Before that, most everyone lived in small villages where they knew everyone, and everyone’s business. There was no privacy or anonymity, nor was any expected. It’s only recently that we’ve come to expect indifference from our neighbors.

But I digress… For embedded designers, GPS hardware and LBS software have both become “plug in” options that require little knowledge of how the freakin’ satellites actually work. Like adding Wi-Fi or USB, GPS is now modularized, cheap, and reliable. There’s little reason not to add it to your next product—assuming the business types upstairs can find a way to monetize it.

The obvious way is to charge your customer for the new GPS features. But that’s so 20th Century. You might instead be able to charge someone else for adding GPS to your latest gizmo. Location-based advertising, for example, is becoming a big deal. Local businesses will pay you to display a pop-up ad when your customer wanders near their store. This doesn’t require any input (or approval) from the user; just an active GPS receiver, the appropriate LBS software stack, and a business agreement with the advertisers. Voila! You’re in the tiny mobile billboard business. You and your Legion of Doom can surely think up some other nefarious schemes, too.

GPS was originally developed to help missiles and other exploding objects find their targets, an unmistakably military technology that’s been put to commercial use. Swords into plowshares, you might say. Soon, under your New World Order, it’ll be time to make monetary targets of all those civilians again.

2 thoughts on “He Sees You When You’re Sleeping…”