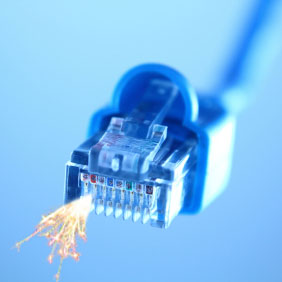 A Little Extra Power on the Side

It was a bit after 5, right around time to go home. Which, of course, has nothing to do with the time when people actually go home in Silicon Valley.

Except this one particular day.

It was Loma Prieta day. The earthquake that interrupted the World Series. I seem to recall finding myself under my desk, trying to grip the carpet to keep from going airborne due to the shaking. Books tumbled from my bookcase onto the chair where I had been sitting seconds before. This one was definitely different.

So, yeah, we went home right about then. Everyone did. Choking the roads and preventing most of us from feeling the many aftershocks through our tires.

Back home, the power was out. For many hours. Life pretty much came to a halt, since most of our usual conveniences stopped working.

Except for one: the telephone. That is, if you were lucky enough to have an old-fashioned span-powered phone that didn’t need any extra juice.

Granted… it was very hard to make a call because the circuits were over-subscribed. You might not hear a dial tone, but you could hear that vague, echoey, slightly-clicky sound that confirmed that, if you waited long enough, eventually a dial tone would kick in.

Today, the only places likely to have that type of phone would be a technology museum. We’re irrevocably linked to the power grid; without it, we’re reduced to troglodyte status. No, worse, since we’ve traded mammoth-hunting skills for WoW dominance.

There is an alternative, however, that provides some of the same kinds of capabilities as the old 48-V battery Ma Bell kept charged up for us: power over Ethernet (that’s “PoE” for us cool people). Which works, of course, only on IP phones where the phone call uses Ethernet to get where it’s going.

Just like old, black, indestructible phones, IP phones can remain functional without the aid of the local utility as long as an on-premise (presumably) battery is up and running. And as long as the internet infrastructure outside the building is still functioning (since the power doesn’t come on a local loop in the way the phone power did). Sweetening the deal, a distress call over an IP phone comes with the IP address, which may help first responders find someone faster if they can map the IP address to a location in a building.

As with any such technology, there are standards defining how this all works. But, against the desires of any sane standards body, someone is now saying that the standard violates their patent and that it was known when the standard was approved.

Before we get into that, let’s review how PoE – officially known as IEEE 802.3af – works. Your basic CAT5 wire has four pairs, of which two are used for 10BASE-T signals. The other two just sit there idle. PoE can either use the unused pair or lay power over the used pair (but not both – officially; more on that in a minute). It can make use of the signal pair because there are transformers that allow the power to be decoupled from the signal.

There’s a detection scheme that’s used when a device is plugged into the network: it puts out a small, current-limited voltage and measures whether there’s a 25-kΩ resistance at the load end. If so, it goes ahead and applies the full voltage (still current-limited) and monitors the resistance constantly. If it detects that the device has been unplugged (or the resistance changes for any other reason), then it pulls the power and restarts the negotiation.

There’s also a mechanism by which the powered device can communicate its maximum power requirements to the power source, and you can also optionally manage these devices using the SNMP protocol.

This worked ok for simple phones and webcams (which seem to be the most killer of aps for this technology), but not for more sophisticated equipment and, in particular, for cameras with the ability to zoom and pan, which take more power. And, according to Linear Technologies’ Alison Steer, this is one of the elements that kept PoE from taking off like people were thinking it might.

Unofficially, some companies also allow you to use both pairs in the CAT5 cable to double (or more?) the power. For example, Linear has what they call LTPoE++ technology, providing up to 90 W of power rather than the 30 or so officially available. Again, according to Linear, this appears to be re-energizing things, at least from the standpoint of ports supplying power (so-called PSE ports). Powered devices (PDs) to be plugged are likely to be fewer in number than ports available for them.

All well and good. But a couple days ago, a company calling itself Network-1 Security Solutions filed suit against a who’s who of companies, claiming that PoE violates their patent.

For many of us, this triggers an automatic eye-rolling “OK, here we go again!” response. There are so many suits and counter-suits these days that you might think that engineering efforts are now concentrated in the courtroom instead of the lab. And there have been lots of stories lately about fat-walleted companies going around buying patents and promising fat returns to their investors by providing what some have described as a kind of “protection racket” for patents: pay us and get access to our patents; don’t pay us and we might end up suing your kneecaps for violating one of our patents.

So I looked up Network-1, and, yes, it did buy rights to the patent from Merlot Communications (now BAXL Technologies). But, according to their website, they have all of six patents, and their main focus now is this PoE issue. Hardly some honkin’ patent powerhouse steamrolling everyone.

I got a chance to talk to their CEO, Corey Horowitz. In particular, I had checked in because their website says that IEEE made reference to the patent when it approved PoE, which would suggest this wasn’t something “discovered” opportunistically later on.

Here’s the way he described the situation, and it rang true based on my own experience running a JEDEC subcommittee many years ago. IEEE doesn’t deal with patents. They don’t decide if they’re good or bad or anything. There are too many patents out there. They simply try to make sure everyone knows what’s out there.

A Rambus case made famous the concept of the “submarine” patent. In such a situation, a company quietly watches a standard get set that, unbeknownst to anyone else in the room, uses their patented technology. Once the standard is set, then, “Boom!” – they can come out swinging, demanding exorbitant licensing fees, and everyone has to pay because it’s the standard. Ka-ching!

Ever since then, standards bodies have been more vigilant, asking everyone to identify any known patents. The existence of patents doesn’t mean that the standard can’t go forward, but the standard practice is that any identified patent holders are asked to submit a letter stating their intent to license the technology on “reasonable and non-discriminatory terms.”

According to Mr. Horowitz, while Merlot wasn’t involved in the standard-setting process (their business had turned in a different direction by then), they did issue such a letter and have kept to that, offering licenses on such terms.

He pointed me through a series of links on the web, and there it was. On a document titled, “802.3af DTE Power via MDI Task Force” and dated 7/9/01 – 7/12/01, the agenda on page 2 includes the line, “Call for patents: US 6,218,930.” And if you check that patent, it is indeed Merlot’s patent and contains language that, to this lay person, with no desire to prejudice the case one way or another or otherwise incur the wrath of any of the involved legal deities, looks remarkably similar to PoE, including the detection capability.

Merlot was too small and didn’t have the cash to enforce their patent, so Network-1 bought it and left Merlot with a share in the income; Network-1 is now pursuing enforcement. And Mr. Horowitz is clearly frustrated that he’s having to do this by lawsuit so many years after the fact and, by his description, after lots of effort at trying to get licenses done the normal, simple way.

A few companies have taken Network-1 up on the licensing offer (by hook or by crook). Network-1’s complaint is that many others have just blown it off. I’ll point you to the press release to see the lists of has- and hasn’t-licensed companies. Let’s just say it contains some august names.

Might there be more to the story than this? Perhaps. But I honestly didn’t bother contacting any of the companies; I’ve heard, “We can’t discuss pending litigation” far too often to waste my time on that. So, for the record, there may be factors of which I’m unaware.

Does this threaten to derail our ability to make phone calls off the grid? Probably not. There are still companies in that business. But it will be interesting to see if the bluff is called and whether a court will enjoin any of the big players.

One thought on “A Little Extra Power on the Side”