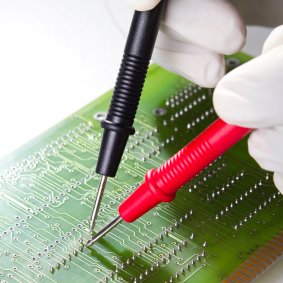 A Sweetener for Research Labs

For many people, the arrival of the fall holiday season means that treats are on the way. And, for that extra bit of fun and “I made this myself” pride, there’s nothing like making candies and fudges and other confections at home.

But working with sugar can’t be taken lightly. In order to get good, consistent results, it takes a steady hand and – most importantly – good temperature control.

So imagine if your family candy-making project started like this: before you could whip out the sugar and fruit and cream and all the other obvious goodies, you first needed to go to the hardware store and get some metal… (if you’re feeling adventurous, you might include a dollop of mercury and some glass to blow with that… challenging the glass to withstand the temperature shock, dancing with your own version of sweet, slow-acting fugu)… you’d then form the metal, perhaps with the assistance of a metal shop… you’d integrate whatever temperature-sensing mechanism you chose, make sure it works, and – critically – calibrate it against known temperatures. And then, voilà: you would have a thermometer you could use to make your candy. Never mind that the rest of the family has gotten bored and moved on to other things by then…

Sounds crazy, but, apparently, this is how the world of physics research works. This type of basic research yields many of the effects that we take advantage of in our semiconductors, and it’s typically done in a university or government lab (particularly if the causation or prevention of lethal outcomes is at stake or if cool words like “kinetic” apply). Many ideas are tried and many ideas are jettisoned in the pursuit of something that will pass commercial muster.

The research community is small and perennially poor, not exactly an exciting target market for high-flying venture capitalists. The problem, according to Dr. Del Atkinson of Durham University in the UK, is that very subtle leading-edge effects require very sensitive measurements – of the kind not readily handled by off-the-shelf equipment.

As an example, Atkinson studies so-called “magneto-transport” for nano-level devices. This area covers the subtle magnetic effects being harnessed for such things as spintronics. These constitute a variety of phenomena being researched for possible exploitation in commercial products.

The problem is that the first six months or year of a project is spent designing and building the measurement systems that will be used in the actual experiments. And the funders of projects have started looking somewhat askance at their money going towards that instead of the actual research work.

As is so often the case with new ideas, Atkinson’s team developed a system for a project of their own, and it worked with unusual sensitivity and at room temperatures. For their own convenience, they designed the setup to be modular so that they could swap out probes and setups easily. They wrapped a software interface around it to simplify configuration.

And then they started showing their results at conferences and talking to people afterwards. Folks were impressed, intrigued – the kind of reaction that gets you thinking, “Hmmm… maybe we have something here…”

And so they have started a company called Rhomap to sell their setup to other research organizations.

What’s interesting is that the fundamental technology isn’t that old. They’re focusing on various interactions between current and magnetic field. At the simplest end, there’s the Hall effect, the upshot of which is that a magnetic field applied perpendicular to a current will cause the electrons not to flow straight, but to curve, causing a build-up of electrons on one side and creating an electric field that’s perpendicular to both the current and magnetic field.

These effects are well established, some being known since the 1800s; it’s just the way we exploit them that’s new.

The actual measurement configurations also aren’t new. Because of the subtlety of these effects, they can’t use simple two-probe systems to measure absolute resistance: the resistances of the probes and other parts of the setup become part of the measurement and can’t be easily subtracted out. (Although two-probe systems are OK if looking just for resistance changes, where the extra resistive components drop out as common-mode contributions.)

Instead, four-probe systems are used. In the simplest linear case, two probes are used to establish a current, and then two separate probes (in between the first two) are used to measure the voltage. Because there’s no current flowing in the voltage-measuring probes, there are no other resistances messing up the values.

Again, nothing new; I seem to recall this being called a Kelvin connection from my product engineering days many years ago.

For measuring two-dimensional resistivity, four or more probes can be placed around the material in what’s called a Van der Pauw setup. Pairs of probes can be used to drive and measure, exchanging the pairs for a full set of measurements.

So if these concepts are old, where’s the news? First, these are old techniques being employed for gauging miniscule values. Sensitivity is of the essence. It has historically required cold temperatures. The ability to achieve precise results at room temperature is turning some heads.

Second, there’s the practical matter of being able to use one setup for more than one specific measurement. Modularity appears to be a novel thing here. With Rhomap’s system, you can swap out the probe assembly and switch projects quickly. The software user interface further drives usability.

On the one hand, it’s surprising that no one has done this before. On the other hand, we go back to our opening assertion: the research market isn’t traditionally attractive to commercial ventures – unless the sales translate to commercial sales, which isn’t likely to be the case here. These are small, relatively low-priced systems. Commercial setups would require larger-scale systems – which do exist. So the research folks are left on their own.

It’s early days for Rhomap; who knows whether a business by researchers for researchers can survive. It will depend on expectations and patience. But if they can make it work, then the funders of programs will no longer have to wait for custom-built equipment with each project. Instead, they can eagerly watch as candy starts rolling off the line faster than Lucy can stuff it in her mouth.