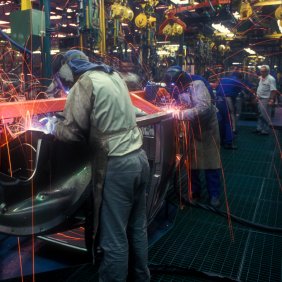 The Union of Engineers

Firmware Engineers of California (FECal) On the Doorstep
by Jim Turley

Earlier this year the Wall Street Journal ran an article that contained this sentence:

“The United Auto Workers union said it is prepared to spend hundreds of millions of dollars in a bid to organize hourly factory workers at foreign-owned car plants in the United States.”

As I see it, there are at least five things wrong with that sentence.

Second, why does the UAW feel these people need to be forced into unionizing?

Presumably, every one of the American employees working at these factories applied for, was interviewed for, and was offered the job based on their skills, experience, and pay requirements. In short, they all got their jobs the same way you got yours. They’re also free to join a labor union any time they want to—but didn’t. The fact that thousands upon thousands of workers spread over several states and many different employers, all made the same decision and chose not to unionize suggests what? That they weren’t interested in joining the union, thank you very much.

The same article confirms, “…there has been almost no call by workers at these plants for unionization.” So it’s not the workers who want the union; it’s the other way around.

Third, why would the UAW spend so much money coercing fellow auto workers—workers who’ve already chosen not to unionize? Because that’s how it grows. Just like a normal, for-profit company, the UAW wants to increase its revenue stream. It amassed its enormous cash hoard by collecting dues from each of its current members, which it uses to “buy” new members. The larger the membership, the greater the revenue stream.

And how did those members pay? By tithing part of their paychecks in the form of mandatory union dues. Paychecks that were negotiated by the union. Which means it’s actually the car companies that are paying the union to accumulate the “hundreds of millions of dollars” which the UAW will use against them.

In what other business are you required to fund your own enemy? That’s like forcing Apple to pay for Microsoft’s software development, or making the Allies pay for Nazi weapons. You could even make the case that we, as car buyers, are paying the UAW to forcibly unionize the people who build our cars. A portion of the price of a new car built in America goes straight into the UAW’s war chest.

This wouldn’t be so bad if there weren’t such a strong correlation between UAW membership and failure. Two of the “Big Three” American car companies upon which the UAW has forced itself went bankrupt a few years ago (and the third one very nearly did), in large part because of uncompetitive labor costs. But at the same time, none of the other U.S. auto plants that were non-union had the same problem. Not a single one. Remember, these are factories staffed by American employees working on U.S. soil and governed by American laws. The only major difference is that one group is unionized and one isn’t. It’s an uncomfortable correlation.

Finally, aren’t we trying to encourage job creation and economic growth? Like any healthy economy, the U.S. doesn’t want to send good-paying manufacturing jobs offshore, so it encouraged foreign automakers to build their cars here with U.S. labor. And it worked. Japanese, German, and Korean car companies flocked to our shores. They built huge and expensive auto plants in the U S of A and hired thousands upon thousands of Americans to run them. Now that they’ve proven successful, what’s the point of converting those productive, flourishing, profitable factories into carbon copies of the unsuccessful ones in Detroit?

In biology, we learn about the concept of symbiosis: two creatures living off each other in a mutually beneficial relationship. Remoras help sharks and vice versa; flowering plants feed bees while the bees pollinate the plants, and so on. But there’s also the biological reality of parasitism: one organism lives at the expense of the other. It is not mutually beneficial; indeed, the parasite often winds up killing its host.

“When schoolchildren start paying union dues, that’s when I’ll start representing the interests of schoolchildren.” Thus spoke the president of the American Federation of Teachers, Albert Shanker. Organized labor unions can, no doubt, provide important safeguards for employees. They can even—theoretically, at least—contribute to their industry and help set standards, further progress, encourage research, and enhance the general welfare. But like any large and established organization, they can also be selfish and short-sighted. In that regard, they’re no different from typical for-profit corporations.

There was a time when employees were often mistreated. When working conditions were unsafe or intolerable and employers held dominion over their charges. The coal mines, garment factories, and shop floors have improved radically since then. Fortunately for our profession, lab benches and cubicle farms have never seen that kind of mistreatment (a few ornery pointy-haired bosses aside). We’re reasonably free of abuse and reasonably free to pursue other employment whenever we want and the opportunity arises. The goal is to make better products and help the customer, not dig in our heels and protect our salaries at all costs.

“We act as though comfort and luxury were the chief requirements of life, when all that we need to make us happy is something to be enthusiastic about.” — Albert Einstein

One thought on “The Union of Engineers”