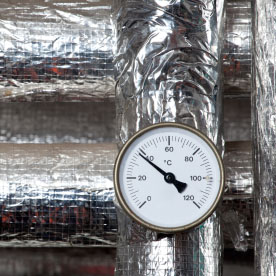 Part 3 – Board Temperature
by Bryon Moyer

When the board temperature next to the component is measured, the junction temperature can be calculated using this equation:

This equation is defined by JEDEC standard JESD51-2A. Note that the equation uses the total power dissipation of the device. Therefore, it is not necessary to know the power distribution going to the top of the package or to the board.

JEDEC defines two metrics to show how a device dissipates heat to the printed circuit board (PCB): Psi-JB and Theta-JB. Theta-JB uses a special test apparatus to force all of the heat to the PCB; whereas Psi-JB uses a standard board mount condition. Theta-JB and Psi-JB values typically are very close in value since 75–95 percent of a device’s heat is dissipated by the PCB. Because of this similarity, a substitution of Theta-JB for Psi-JB is possible. However, Psi-JB is the preferred metric to make this calculation. Figure 1 shows the thermal dissipation paths for two types of leadframe-based packages.

To use Psi-JB to calculate the component junction temperature, you must have a functioning device, the ability to measure the PCB temperature, and the known device power dissipation. The goal of the temperature measurement is to physically measure the PCB temperature one millimeter away from the functioning device. The board temperature can be measured using a thermocouple or an IR camera, depending on the equipment available and the level of accuracy required. Due to the small size of the target measurement area, the IR thermal gun is not appropriate to use due to the small spot size to be imaged. The board temperature measurement point should be on a center lead of a leaded package, or less than one millimeter away from the side of the package for an area array package, as illustrated in Figure 2.

A second method to determine board temperature is by using an IR camera. The IR camera can be focused by using the clarity of the device leads as a determining factor. Figure 2 shows a properly focused IR camera image. It is important to be sure that the image is corrected for emissivity to get an accurate temperature reading.

Using Psi-JB during the design stage

One of the main benefits of using Psi-JB is that this metric can be used during the thermal design stage of an electronic system. Because a board with heat spreading planes (such as ground) is generally effective at spreading heat, often the board temperature can be estimated using an existing system or total power calculation. Using the estimated board temperature at the location of the component of interest, the equations for Psi-JB can be used to estimate component junction temperature well in advance of actual measurements.

If an existing system is available, such as a telecom board, a server blade, or a mobile device, then this method can be used. First, the temperatures of the existing system need to be measured at various locations during typical operation. Then, the board temperature near to a similar component can be applied to the Psi-JB equation, using the Psi-JB value and expected power dissipation for a new component under consideration.

This is a very simple and accurate method to consider the thermal performance of a new component. It is simple since it only uses the Psi-JB parameter, which is easy to obtain from the component supplier, and you do not need to do complex analysis to account for the system surrounding the new component. It is accurate as long as the total power dissipation and system configuration are not likely to change dramatically from the existing generation due to system limitations.

The thermal distribution on a PCB can be easily determined through the use of IR camera imaging. Non-uniform PCB power distributions are clearly shown by localized heating around certain components. This imaging also can highlight the need for better PCB thermal design to improve heat spreading. Improving the thermal uniformity of the PCB can be achieved by increasing the copper content near high-power devices through wider traces, additional thermal vias, or reducing any breaks in key thermal spreading planes such as ground or power. By providing a better path for thermal dissipation, the localized heating of the PCB will be reduced – improving the overall thermal performance of the system.

Using the Psi-JB metric and these practical lab-based measurement techniques, you can effectively and accurately estimate the die junction temperature of a component. This is the third and final article in this series which has explained the methods that can be used to estimate die junction temperature. More information can be found by reviewing the thermal metric definitions in the JESD51 series of JEDEC standards, or reviewing application notes such as those found at www.ti.com/thermal.

Matthew Romig currently serves as the Packaging Technology Productization Manager in the Analog organization at Texas Instruments, where he is responsible for packaging technology development and implementation for TI’s broad range of Analog product lines and packaging technologies. He has developed specialties in thermal analysis, flip chip packaging, and power management packaging. He is also a member of TI’s Group Technical Staff. Matt received his BSME from Iowa State University, Ames, Iowa. He can be reached at ti_mattromig@list.ti.com.

Sandra Horton, Analog Packaging Group, Texas Instruments is a leader in thermal modeling and has served as co-chair of the TI Thermal Council since 2007. She supports customer and development models which includes automotive products. Sandra received her BSME at Texas A&M University. She can be reached at ti_sandrahorton@list.ti.com.