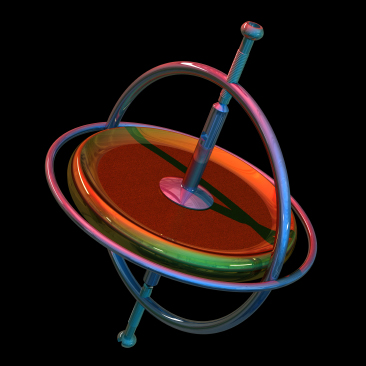 [Editor’s note: this is the seventh and final in a series of articles derived from a session at this year’s ISSCC that focused on sensors and energy harvesting. The prior article dealt with a self-sufficient energy harvester. For more details, you are referred to the ISSCC proceedings.]

Our final look at sensors brings us to perhaps one of the most ubiquitous and evident sensors in phones these days: the inertial measurement unit (IMU), or, the thing that makes your phone’s display change from portrait to landscape when you rotate it.

IMU is a generic term that includes any sensor that detects a change in momentum, and there are three classic types: the accelerometer, the gyroscope, and the compass. All three can be made to work in each of our 3 dimensions, giving each of them 3 degrees of freedom (DOF), so the typical marketing pitch will be that any device having all three sensors acts as a 9-D or 9DOF sensor, 3 from each component. And it’s easy to accept that and be done with it.

But either a bit of thought or some browsing on the internet will remind you that, even though you’ve got three 3-D sensors, you’ve got only six degrees of freedom.

Accelerators take care of linear momentum, and you’ve got three orthogonal dimensions there. Which three they are is arbitrary, but, if you have gravity as a reference, then they’re, obviously, up/down, left/right, and front/back. Gyroscopes take care of angular momentum, and there are three of those dimensions. Again, they’re arbitrary, but if you have the horizon or some other plane as a reference and a forward direction, then they are roll (side-to-side rotation), pitch (front up/down, back down/up) and yaw (rotating in the reference plane).

Well, at the very least, it gives you another reference direction (the accelerometer can detect gravity): magnetic north. But it also helps navigation in a manner that hearkens back to the earliest days of shipping: dead reckoning.

With basic accelerometers and gyroscopes, you have a known starting position, and then the sensors detect your movements, both laterally and as you make turns. By tracking each of these, it should be able to tell you your final position. But the weakness of dead reckoning is that each measurement has an error, and if, after the first movement, you miscalculate your next location, even slightly, then the next movement is being tracked from the wrong place. And if that next movement has an error, well, you get the picture. Many a ship would end up somewhere unexpected due to accumulated error.

The nice thing about a compass is that it gives you a reference frame to help correct these errors. It has to be used carefully, since there are magnetic anomalies and such depending on where you are, and it probably assumes that not much happens atop the very pole itself. But that’s what the compass gives you – a cross-check on the six degrees of freedom you already have.

Accelerometers and gyroscopes are typically MEMS devices, and the simplest ones take care of one dimension. They involve a mass of material called a proof mass whose inertia forms the basis of the measurement. For an accelerometer, a cantilever is typical; for a gyroscope, a vibrating tuning fork is a common approach. For the oldest units, a 3-D accelerometer would involve three 1-D units on a board.

The challenge with that is alignment: they need to be precisely 90° from each other for the best accuracy. Assembly tolerances can make that a challenge. Putting three independent units on a single chip is an improvement, since they’re fabricated at the same time and can’t be rotated with respect to each other.

For a gyroscope, you also have the issue of vibration frequency. Having three masses vibrating at the same frequency is pretty much impossible – there will be some differences and some cross-talk between the units, even if – or particularly if, in the case of cross-talk – they’re on the same substrate.

You theoretically don’t need any vibration to detect rotation. Rotation gives rise to two fictitious forces: the familiar centrifugal force, which looks like it pulls along the radius of rotation, and the Coriolis force, which appears to pull tangentially in the direction opposite the rotation. It’s the Coriolis force that’s of interest for sensing rotation.

The Coriolis force is probably more familiar when discussing planetary issues like weather, which way water drains down the bathtub (the latter ostensibly being a mythical application), and cannonball trajectories (it would be nowhere without a military application). Those cases involve things that are not coupled to the rotating frame: air or water. Looking from outside, if you observe a piece of air (work with me here) that’s not moving, it will look like the earth is moving underneath it. But from the viewpoint of someone on the earth, the earth will appear to be still and the air will appear to be moving.

Things are slightly different in a sensor, since the proof mass (easier to observe than a piece of air) is attached to the rotating frame, so if it were infinitely rigid (please don’t ask for a formal definition of that), it would simply rotate along with it and there would be no Coriolis effect.  But imagine that you have a cantilever that’s springy not in the typical up/down direction, but in the side-to-side direction, with a weight at the end. If you rotate the whole thing, the weight is going to want to stay put, and it can because of the springy attachment, so, from the standpoint of the cantilever, it looks like the weight moves against the direction of rotation. If the rotation stops, then the spring brings the weight back in line.

There’s only one problem here: it’s really hard (probably impossible) to tell whether that weight appeared to move as a result of rotation or just linear movement. But if you take the cantilever and pin it in the middle instead of the end – a see-saw kind of arrangement, with two weights, you can now tell the difference. If the acceleration is linear, both weights will appear to move in the same direction. If it’s angular, they will move in opposite directions. (And if it’s both, the two ends will move unequal amounts.)

Note that those effects require no vibration. The nice thing about having vibration is that you get a periodic signal, which is much easier to measure and filter in order to achieve the desired quality. We’re talking really small movements of really small proof masses, so sensitivity and accuracy are critical.

The specific ISSCC paper (yes, we were getting there eventually), by Luciano Prandi et al from ST Microelectronics and the University of Padova, discussed a gyroscope built out of a single proof mass that provided all three degrees of freedom. This not only completely takes care of the alignment issue, but it also saves space. In addition, there is only one vibrating proof mass instead of three.

If you are measuring only one angular dimension, you can rely simply on the primary vibration mode. In a traditional arrangement, three tuning forks provide three independent primary vibrating modes (ignoring the separate challenge of in-plane rotation). By contrast, with their single vibrating mass, the team used the primary mode only to drive the vibration (and sense it for driving purposes); they used secondary modes for sensing rotation.

The proof mass consisted of four trapezoidal masses connected by springs at the outer corners and by more springs to a central cross-beam. The vibration was driven using comb-finger actuators on two opposing sides. That vibration was sensed on the other two opposing sides – the sensed vibration (primary mode) was inserted into the feedback loop to establish a solid, stable vibration. Each trapezoid moves in and out from the center in the primary mode, but the four of them do so in concert, so the whole unit alternately expands and contracts, giving it the name “beating heart.”

Sensing is done by measuring capacitance at key places as a result of the secondary vibration modes. There is a secondary mode whereby each of the opposing trapezoids vibrates out-of-plane in opposite directions. These are used to detect roll and pitch, which change the orientation of the plane. Yaw, which is rotation within the plane, is detected by parallel plates on opposite sides of the unit.

This arrangement and the subsequent signal processing achieved very high performance, with cross-axis sensitivity of less than 2% of full scale; they claim that this is largely due to mounting tolerances when assembled. Also important is its imperviousness to interference from outside acoustic noise – that subwoofer the neighbor’s been complaining about. Or simply the music your phone is playing while it is simultaneously deciding if it’s been turned on its head. With the unit stationary and a sine swept from 500 to 25,000 Hz, the readouts for all three dimensions were at most around .05% of full scale.