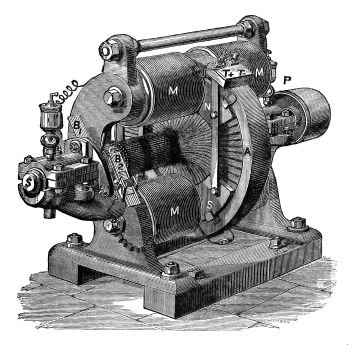 Putting a Spin on Motor Control

More than 180 years ago, a bunch of guys started messing around with harnessing electromagnetism – building devices that converted electrical energy to mechanical energy.  Their basic design – the electric motor – has changed surprisingly little in the almost two centuries since those early attempts.  Electric motors have gradually become more efficient and more powerful, but the fundamentals have remained the same with few major breakthroughs – until fairly recently.

We see a number of examples in our world where devices have been made “smart” to very little advantage.  Well-meaning engineers, enamored with the potential of embedded processors, have put intelligence into everything from toasters to road signs.  There are few examples, however, where the advantage of taking a “dumb” mechanical device and adding intelligent control have had as much impact on performance as with electric motors.  Electronic motor control pays enormous dividends in performance, efficiency, and reliability.

High-performance electronic motor control isn’t easy, however.  To do the job right, you need to be adjusting the supply to the motor in real time based on the current position, speed, and load of the drive mechanism.  That means that, in general terms, you need some good analog componentry like power transistors, a computing platform that can handle the overall algorithm and fine-tuning, some signal processing capabilities, and some sensor/input facilities.

Of course, motor control comes in varying levels of sophistication, depending on your BOM budget and what you’re trying to control.  In olden days, we needed position sensors to tell us the rotor position of the motor.  While sensored control is still popular, newer controllers can deduce the rotor position simply by looking at the back EMF of the motor.  This reduces the size, weight, and complexity of the control mechanism.  As in most optimizations like this, we’re trading computing power (which is becoming smaller and cheaper every day) against mechanics and sensors – which do not typically obey Moore’s Law.  Over time, the Moore’s Law side tends to win, and that’s giving us some exciting new options in motor control today.

Historically, this has been difficult to bring all under one roof in the semiconductor world because of the wide range of digital, analog, electromechanical, and sensor technologies involved.  Many companies were good at one or two of these things, but not the others.  The space has been further complicated by the huge variety of types and sizes of electric motors in use – ranging from tiny units inside devices like mobile phones to massive motors used to power vehicles and heavy equipment.  While all of these benefit from similar technologies in intelligent control, the gamut of sizes, styles, and applications means that motor control must be similarly diverse.

Texas Instruments took a look at their technology portfolio and noticed that they had very strong products and technologies in each of the major areas required for motor control.  They further noticed that motor control was an explosive growth market.  All of that together led TI to put together a strong initiative in the area of motor control, and we’re now seeing the fruits of that effort in the form of new devices and new development kits.

How big is the motor control market?  Anybody that gives a number is just guessing at this point.  We can say that it is big.  There are more electric motors in use today than there are people on the planet.  There are even more electric motors than cell phones.  That’s a lot!  When you consider the current emphasis on energy conservation, green design, and the push to make devices do more with less power, smaller batteries, and less heat to dissipate – electronic motor control offers huge rewards.  As we mentioned before, there is a huge diversity of motor types, sizes, and applications out there – and TI is launching a broad-based effort to reach a wide swath of that potential.

The advent of lower-cost, more effective motor control is driving a shift from conventional (cheaper) brushed DC motors toward brushless motors in many applications.  In order to help us get there, TI has just released a new evaluation kit that’s designed to minimize our “time to spin.”  Honestly, since we’d never been aware we had a “time to spin” before, we wanted to investigate further.  The new kit, the “DRV8312-C2-KIT” is designed for “spinning three-phase brushless DC (BLDC) and brushless AC (BLAC) – often referred to as permanent magnet synchronous (PMSM) – motors.” According to TI, the new kit is capable of spinning motors right out of the box, so there’s that “time-to-spin” minimization.  Whew!

On a more useful note, this development kit, which sells for $299, can perform sensorless field-oriented control (FOC) as well as sensored and sensorless trapezoidal control of sub-50V and 7A brushless motors for driving “medical pumps, gates, lifts and small pumps, as well as industrial and consumer robotics and automation.”

The kit includes a three-phase inverter-integrated power module base board, which is cleverly designed to accommodate a variety of plug-in modules with various MCU/processing options via the controlCARD interface.  This spins the usual development board architecture around – which comes in quite handy in this application.  This kit comes with a C2000 Piccolo F28035 controlCARD, which has been pre-flashed with code to spin all motors using the included GUI.  The board also includes the GUI software on a USB stick; isolated XDS100 Emulation, UART, SPI, & CAN connectivity; a BLDC/BLAC NEMA17 55W motor; a 24V power supply; and the other usual dev kit miscellany like documentation.  The kit also includes the CCStudio IDE with no compiler or memory limitations, so you can jump right in and start messing with the included code.  I know I would.

If you want to stay with brushed motors, well, TI has your back there too. They also announced this week a series of eight new motor drivers for stepper motors and brushed DC motors.  These new entries in their DRV line of devices along with the development kit are just a fraction of TI’s overall motor control strategy.  Motor use is likely to only increase – even from the stellar volumes we see today.  If a single company achieves dominance in the area of intelligently controlling those motors – that would be a valuable prize indeed.