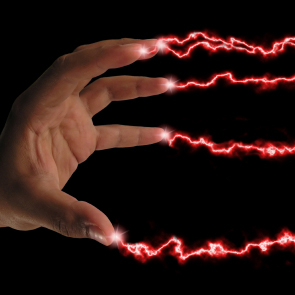 [Editor’s note: this is the fourth in a series of articles derived from a session at this year’s ISSCC that focused on sensors and energy harvesting. The prior article dealt with X-ray detectors. For more details you are referred to the ISSCC proceedings.]

When you put a bunch of kids in a room to play, there’s always the risk that something will go wrong, but, for the most part, if the kids are reasonably similar in size and age, things should go fine.

Take a room full of toddlers and toss in a half-dozen 12-year old rough-housing boys, however, and, well, you’re going to start worrying about the health and safety of the wee ones. You usually try to keep those two groups apart, if for no other reason than for the sake of the sanity of the parents sitting anxiously, praying that some hulking he-man-wannabe doesn’t come hurtling across the room to land on their delicate little flower.

This gets to the mental distinction I make between “electrical” and “electronic” engineering. The former conjures up images of motors and giant insulators and humming wires and sparks (preferably in the form of a Jacob’s ladder), all tumbling about in good fun. The latter evokes delicate little circuits within which individual electrons are encouraged to be a good boy and tunnel through the oxide for Mommy.

Problem is, the electrical and the electronic are increasingly cohabitating. Automobiles and robots are good examples, but perhaps even more extreme is the shop floor. Heck, with all the giant motors and solenoids and all other manner of large-scale electric phenomena in play, you almost don’t want your electronics in the same room unless they’re safely shielded in a lead box. It’s like having your impressionable 4-year-old across a thin wall from a death-metal nightclub. You can’t help but fear that something’s being damaged by the mere proximity.

But it’s worse: now we need the electrics and the electronics to interact. The electronics are needed to control the electrics. That’s worse than bringing the head-bangers and kidlings into the same room; that’s like having a 4-year-old bouncer eject some ragged, drunken dude in a Slipknot mask. You just know someone’s gonna get hurt.

This is the world that our featured sensor lives in. The sensor itself is prosaic at best: it’s one of the first electrical things you might have learned about as a kid: a simple current sensor.

There are lots of different exotic ways of measuring current these days, using magnetic fields of various kinds and strengths, exploiting newly-discovered phenomena. But the one we’re going to look at isn’t one of those mamby-pamby approaches; they’re for little sissy circuits with small currents. No, we’re going brute force, back to invasive caveman basics: the shunt.

And why they call it a shunt actually isn’t clear to me, since a shunt (in circuits or in railroads) is generally a side-path in parallel with the main path, often a short-circuit (intentional or not). Here the shunt isn’t a parallel resistor; it’s simply a low-value series resistor inserted into the circuit (hence invasive). The current causes a voltage across the resistor that can be measured and calibrated to reflect the current. Simple.

Key here, of course, is that the resistor can’t be so large that the voltage drop starts to starve the actual intended load. Ideally the drop would be zero, except that it would be hard to get any information from that. There are also nuances as to whether the resistor goes between the supply and the load (“high-side”) or between the supply and ground (“low-side”), but that gets even fuzzier when dealing with AC.

The specific example from ISSCC is a current sensor that might be used on something like a motor, intended to measure AC currents from 0.1 A to 100 A – that’s a 1000x range – in an environment that may see up to 6000 V. Yes, there is no decimal point anywhere in those zeros. In a world where we’re asymptotically approaching 0 V as a supply rail, we’ve got four digits of manly voltage and they’re ready to zap. (OK, that’s only a half-centimeter spark, but it will kick your bandgap’s butt…)

The challenge here is to measure the current accurately across such a broad range while protecting the sensitive circuits needed to do that from the high voltages that the motor itself might experience.

The approach taken by the team of Rothan et al from CEA-LETI-MINATEC and Schneider Electric was to build an AM radio. Even though that’s not how they described it, that’s how I made sense of what’s going on.

First, they provided isolation by setting up two domains, one for high-voltage and one for low-voltage. They separated them by two planar micro-transformers that they custom-built for the application, using a damascene process and careful passivation to ward off any arcing. And they did something that is, at first glance, confusing: the transformers have a 1:1 ratio, meaning they don’t step down the voltage.

In a setting where you may be expecting to downstep from the high voltages to something more comfortable, that makes no sense. But here’s the deal: those transformers are not there to transfer the motor AC signal: that AC is more or less DC to the measurement circuit.

These transformers are used to get the information from the high-voltage realm into the low-voltage realm without a direct connection. And that’s done more or less by placing the slowly-varying current signal onto a much faster (20 MHz) carrier, like an AM radio signal (except not broadcast through the air) that can then cross the transformer.

They do this by tapping across the shunt resistor (at 1 mΩ – note that’s a lower-case “m”), which creates a sense current. They then chop that sense current by transferring a 20-MHz 1.6-V (nominal) clock signal across one of the transformers to control a couple of power NMOS transistors that act as switches to periodically interrupt the sense current. That chopped signal can then be transferred across the second transformer, where the actual readout is performed.

They first read the current using a resistive transimpedance amp to create a voltage, and then they amplify that voltage once for the 1 – 10-A range or twice for the 0.1 – 1-A range (and not at all for the 10 – 100-A range). They then run it into a sample-and-hold envelope detector and low-pass filter, which remove the carrier and isolate the original slowly-varying current signal (as a voltage), which can then be read. All of this is done differentially, so the common-mode bias doesn’t matter.

The sample-and-hold circuit is clocked by pulses created from the same 20-MHz clock that generates the carrier; they have a delay line so that the timing of the sample event can be properly aligned relative to the chopping action.

Using this approach, they were able to keep the fragile sensing circuits from being trampled by the big, galumphing motor while still measuring current across three orders of magnitude with less than 1.5% non-linearity.

(Note; you can find the next article in the series here.)