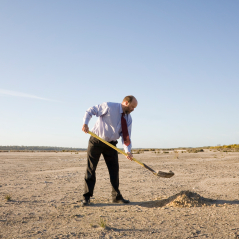 If You Dig a Hole Through the Bottom of the EDA Market - Do You Wind Up in China?
by Kevin Morris

No one has ever made the mistake of calling Altium “timid.”  As long as they’ve been in business, the company co-founded by Nick Martin has been making bold and controversial moves.  This week, Altium’s announcement that their company headquarters would be moving from Sydney, Australia to Shanghai, China is no exception.

In the beginning, the company provided the alterna-tool for designers who wanted to do their own PCB layout but didn’t have big corporate budgets.  ProTel made a name for themselves in low-cost desktop PCB design.  Competing with rivals like OrCad (now part of Cadence), the company put the world on notice that they weren’t content with the status-quo in EDA and that they were going to be following their own drummer.  ProTel became synonymous with low-cost PCB design.

The next place that drummer took them was into programmable logic and embedded systems with FPGAs.  ProTel re-branded itself “Altium” and began acquiring a wide range of smaller companies – in areas like embedded system design, soft-core processors, compilers, and FPGA tools.  They completely re-invented their product line and launched Altium Designer – a top-to-bottom desktop solution for electronic product design – featuring a development board called the “nanoboard.”  The philosophy behind Altium designer was more revolutionary than the product itself.  The product was a vertically-integrated set of EDA tools, including a specialized development board.  The philosophy was the idea that many electronic products could be developed using “soft” design – where programmable hardware and software elements combined to give designers the flexibility to create any product they wanted – using a standard platform of an FPGA-based embedded system.

While many design teams adopted Altium Designer, fewer embraced the soft-design philosophy.  Many just bought Altium Designer with the intent to use the ProTel PCB tools — and with the idea that they’d expand into the rest of the suite at some point in the future.  Nonetheless, Altium’s vision of the design process sold lots of systems, even if the reality was ahead of many of their customers.

In another controversial move, Altium stopped showing up at the Design Automation Conference.  The nerve!  Didn’t they know that DAC was the worldwide showcase for electronic design technology?  Of course, the average Altium customer probably never heard of DAC, and the cost of attending DAC from a base in Australia was significantly higher than for, say, Cadence – who often just had to drive a few miles up the 101.  Still, for a major player in the EDA market to boycott DAC was unheard of – at least until Cadence did virtually the same thing a couple years later.

Next, the company decided to drop their prices – a lot.  In one swoop, the company took rock-bottom EDA prices and cut them approximately in half.  They also introduced a pay-as-you-go monthly license.  The goal?  To saturate the world with seats of Altium Designer and gain market penetration with dramatically lower prices than competitors.  Altium’s seat count went up, but it isn’t clear that revenues followed.  Competitors complained that Altium was trashing the tools market – driving down prices for no apparent reason.  Customers – particularly small ones — applauded.  They could finally afford decent design tools.

This week, Mentor Graphics issued a press release stating that they had over 50% of the worldwide market share in PCB design tools.  That means – by dollar volume — that Mentor has made a significant market share gain against all competitors, including Altium.  On paper, most of the market-share gains appear to be at the expense of rival (and #2 player) Cadence.  Altium’s apparent market share has remained minor.  However, with Altium’s significantly lower per-seat prices, a count of seats might be more favorable to them than market share revenue numbers.  While competitors continue to point to Altium’s single-digit market share as evidence that they’re not worried about them competitively, they also keep right on talking about Altium, making one wonder if the confidence is completely real.  It is always unnerving to deal with a competitor that has a history of making bold and risky moves that can impact what might otherwise be a stable and predictable market.

This week, in the latest salvo of surprise from the EDA company down-under, Altium announced that they would be moving their corporate headquarters and core product development teams from Sydney to Shanghai.  I talked with Altium co-founder and CEO Nick Martin about the instantly-controversial move. “We’ve been thinking about this for quite some time,” Martin explains.  “We believe the whole Chinese electronics industry is changing.  The Chinese government is investing a trillion dollars for China to become the world’s center for software.  China is already a worldwide center for electronics manufacturing, and they’re working to become a center for design.  We have lots of licensed copies in China, but we believe living and working there will let us get under the skin of what that really means.”

Altium’s executive team and “core engineering group” will relocate to China to form the core of what Martin envisions as a much larger team – recruited and trained in China.  “We’ll have to find the right people in China and train them on how we do software,” Martin continues.  In addition to immersing themselves in their target market/culture, Martin sites an enormous difference in the pool of available talent in the two countries – with over 60 million university graduates and hundreds of thousands of those in the SW/IT area, China certainly promises a large pool of programmers to choose from.

Altium already has an office in Shanghai staffed by about 50 people, and Martin says another 20-30 are relocating from Sydney when the company moves its headquarters.  By the numbers, not a big enough relocation for the industry to get all up-in-arms about.  The company will remain an Australian company and will continue to be listed on the stock exchange there.  Altium’s operations in other countries like the United States will remain intact.

Altium’s target designer seems to be the “tall thin” engineer – one who rides herd on product design from beginning to end.  In China, however, the tall-thin engineer is rapidly giving way to mega-companies developing some of the more sophisticated products in the world.  It will be interesting to see if Altium’s all-in-one tool message continues to resonate there, or if the company will be relying more heavily on its recently-announced enterprise-level product strategy to keep traction with the Chinese market.

Some competitors see Altium’s move as an opportunity.  Their reasoning is that product development is bound to be impacted by a development relocation, and that means Altium’s development roadmap should be slowed, so they could have a point.  Another issue with targeting China’s market is historical problems with IP rights – particularly software IP rights — in China.

Of course, one of the ways to combat IP/software theft is to offer software as a service – using mechanisms like cloud-based computing.  Martin acknowledges that the company is investing heavily in cloud-based computing, but he holds that the entire design process will not be moved to the cloud any time soon.  The amount of design data and the computational speed and immediacy required in design automation makes cloud-based computing currently inadequate for many tasks.

While many claim that the move is in response to financial difficulties, Altium points out that such a move is expensive in the short term.  As with Altium’s previous mold-breaking moves, this one seems to be inspired much more by strategic ideology than by financial necessity.  It will be interesting to watch the results.

8 thoughts on “Shanghaied in Sydney”