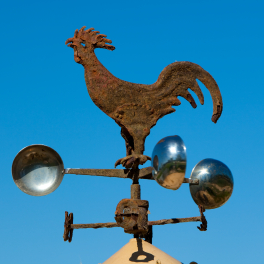 [Editor’s note: This is the first in a series of articles derived from a session at this year’s ISSCC that focused on sensors and energy harvesting. The intent is that, in addition to highlighting some of the leading-edge work being done by the presenters, we can also bring some of the basic sensor issues to the forefront, since they are moving from the realm of the arcane to the realm of the everyday.]

One of the earliest images I remember of scientific equipment was the anemometer atop a barn. Such a simple design: it’s a fan in reverse. Like a windmill, only providing information instead of energy.

The anemometer survives today, in much more precise form, of course. But, as with so much mechanically simple stuff, solid-state mechanisms are available for measuring wind. This allows further miniaturization, enabling a new set of applications.

But this is not a MEMS-based solution. So, absent any moving parts, how can you measure the wind?

More specifically, there are two things to measure: the wind speed and the wind direction. First, the speed: it turns out that, if you have air blowing across a surface, a temperature gradient will be set up along the direction of flow. Based on materials knowledge and calibration, as well as a sensitive thermometer, you can calculate the airspeed based on the difference in temperature.

To measure the airspeed, then, in theory, you need a thermometer at one end of the surface and one at the other end – “end” being defined by the wind direction. Find the temperature difference and you’re good. Well, assuming you know how to translate that into wind speed. But it’s kind of impractical to rotate this thing to align with the wind. Sort of defeats half the purpose of the anemometer.

Instead, you can measure in two dimensions: thermometers at, for lack of any more compelling standard, the cardinal directions: north, east, south, and west. If you get a good westerly going, then you’ll detect the gradient along the east-west line; similarly for a northerly. If the direction is at some other arbitrary angle, you’ll detect differences along both axes, and you can use that information to get both speed and direction.

This can all be done in silicon. From a practical standpoint, the chip may be mounted to some other material – in this case, ceramic – to provide the wind-blowing surface and protect the die. And it’s assumed the wind is going only in two dimensions. This isn’t going to detect downdrafts.

In addition, in order to operate on the basis of known temperatures, the sensor isn’t just operated at ambient temperature: heaters are used to heat the silicon. That takes power. The goal of the paper by Jianfeng Wu et al of Tsinghua University and Delft University of Technology was to figure out how to do an accurate, low-power sensor.

There are actually two ways to approach the gradient sensing. The obvious one is to measure the differences directly. The other way to do it is to adjust the heaters to cancel out the temperature difference and then measure the power it took to zero it out.

That last method may sound ridiculously indirect, but it turns out that the wind speed follows a nice, clean square law function in that scenario, making it easier to calculate. It’s not quite so clean going from the actual temperature measurements. But – and no surprise here – you have to run the heaters at a higher temperature to do the canceling, and that approach took as much as 450 mW of heater power – much more than targeted for this project.

So, even though it’s a harder computation, they went for the direct gradient measurement.

They used polysilicon resistors as heaters. Sounds like a big resistor.

The amount of power needed for the heater would theoretically be limited by the noise floor of the heater – basically like running your engine as low as possible without having it cough and possibly stall out. But it also has to run high enough so that the thermopiles, whose output level will depend on the heating, will produce a signal high enough to be read by the sensing circuit.

And here’s where we get into some of the rather gory details of the implementation, probably best appreciated by signal-processing specialists (which I am not). Speaking very generally, they used a thermal delta-sigma modulator approach. The heaters and thermopile pairs actually acted as thermal filters, or rough integrators, in the feedback path. They tried a couple different approaches – one using an auto-zeroed pre-amp, the other adding an electrical integrator to make it a 2nd-order filter, chopping instead of auto-zeroing.

I’ll refer you to the actual proceedings for the nitty-gritty results, but the bottom line is that they were able to detect speed with ±5% speed accuracy and with ±2° direction accuracy, using 50 mW of power – one-ninth the power of prior work.

Not bad. Still not sure how pretty it will look atop the barn…

(Note: next in the series is here.)