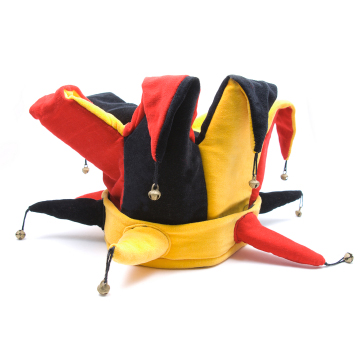 In a surprise announcement at the company’s annual shareholder’s meeting, Google founders Sergey Brin and Larry Page admitted that “this whole Web thing is really kind of a scam. It’s just a way for us to sell ads.

“There’s no real content out there. It’s bogus. Google search isn’t ‘finding’ anything. It’s just a big honkin’ PHP script that generates content in response to search queries. You know how Drupal, Joomla, and those other content-management systems generate Web pages on the fly? It’s like that.

“And it perfectly complements our advertising business model: Any random wild-ass query always generates at least a few pages of ‘content’ that we can sell ads against. No matter what you’re looking for, we’ll supply an ad-supported result.

“That’s why Google finds stuff so fast: we make it up. You don’t think all those billions of Web pages are really out there, do you? There’s no way we could index the real thing. That’s nuts.

“We’re basically in the instant-gratification business. People type what they want into Google and we satisfy their search in under a second. There’s very little genuine content on the Web and most of it is boring anyway. That’s not good for business. So we created all the interesting stuff to get page hits.”

“At first, we were worried that our scripts wouldn’t generate very good content. We didn’t think people would be convinced. Turns out, nobody cares. Everybody kind of expects Web sites to be these crappy, badly formatted rants, so we’re golden.

“Early on, we had some problems. Remember LOLcats? That was a total screw-up on our part. Some intern had kludged together a few photos with a new text-generation script but somehow it went live. We thought, ‘holy crap, this will blow our cover for sure,’ because it was so spectacularly broken and obviously machine-generated. But people seemed to like it. So what the hell, we left it up.

“We made a ton of money off of that one.

“Our scripts have gotten a lot better since then. They still misspell stuff and generate a whole lot of bad grammar—and they’re crap at HTML formatting—but nobody seems too picky about it. You’d think people researching term papers or doing important market analysis would be more concerned about the source of their data, but apparently not.”

Brin admitted that not all content on the Web is auto-generated by Google scripts. “Yeah, some stuff out there is real. People really do shoot stupid videos and post them on YouTube—thanks for that, by the way. Most personal blogs are made by real people, too, but that’s about it. The rest is all us.

“Recently, we started employing some real human writers. We do it just like eHow.com, Demand Media, and companies like that. We see what people are searching for and tell our writers to whip up some content to match the search. We them pay a penny a word, just like the others. They don’t actually understand the topics they’re writing about, but that’s no big deal.

“Every summer we hire a bunch of liberal arts majors straight out of college. French lit, women’s studies, comparative religion… that kind of stuff. It’s either us or a burger joint. We take them off the streets and give ’em good jobs. You’re welcome.

“The biggest problem we face now is copyright infringement. Practically all Web content is ours; we created it. But we can’t assert our copyright because that would expose our whole scam. Bing, Yahoo, and other search engines do the same thing, but they’re lightweights. That’s why they often return different results for the same search: it’s just their script ‘finding’ different content. Some of their stuff is okay, but I think ours is better.”

What’s ahead for Google—and by implication, the entire Web? “The next step is to run the whole thing locally on the user’s PC. That’s why we created our own browser. The next version of Chrome will generate content itself so we don’t have to. Why should we invest millions of bucks in all these big servers? Users will love it because it will ‘find’ their ‘results’ faster, and we’ll be happier because we won’t have to deal with all the client/server traffic. Oh, and the ISPs love the idea because it gets all that traffic off their network. Everybody wins.”