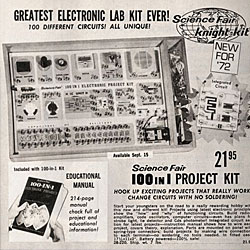 Most of us got into engineering because we like making things.  There is a visceral satisfaction that comes from the process of creating a new thing that didn’t previously exist – and most engineers come pre-wired from the factory with a powerful subconscious drive to scratch that particular itch.  Along with a love of making things, we are driven by the problem-solving process that inevitably follows.  We want to think, make, observe, think, adjust, and make again.  We can’t help it.

We didn’t just start this behavior on the first day of engineering school.  For me, like many engineers I know, the engineering drive started much earlier – in childhood.  It also began not with making but rather with un-making.  For the nascent engineer, disassembling household devices seems to be part of the primordial formation process.  We take things apart to see how they work inside, occasionally even taking the time to re-assemble them afterward.  Anything with a recognizable fastener for removing the case is fair game.  No functional household item is safe.

After the disassembly phase comes the modification phase.  If a 6-volt battery makes that model car go normal speed, wouldn’t a 12-volt one make it go faster?  Couldn’t that inductor use a few more turns of wire?  Do we really need the stupid “safety” feature on this toy?  Generally the majority of these exercises have less than satisfactory results – a puff of blue smoke, an appliance that quietly goes “missing” with hopes that the parents never notice, a clock with a second hand that no longer ticks.  Parents who know what to look for, however, can catch the warning signs of a budding engineer early on.

It is at this stage in life that many of us began making things.  If we were lucky, those clever parents bought us “kits.”  The kit solved two problems at once.  First, it was an educational tool.  It gave us a project we could use to engage our minds and hands, learning the art, craft, and science of making things.  Second, it was a line of defense.  All of the time we spent on our kits was time we did not spend taking apart the family VCR or dad’s heirloom watch.

The problem with kits, of course, was an unsatisfying lack of creative flexibility.  The kit generally came with parts, instructions, and a linear plot line.  We knew before we started how the kit would turn out.  There was a picture on the box.  After a few hours of pin 17 soldering into hole BG, we powered up the thing and, oops, hang on, dang… OK, now – we powered up the thing and it came to life – playing music, driving around the room, counting the change in our piggy bank – the intended function almost didn’t matter.  We had MADE something.  There was a real device that did not exist before our hands touched it – and now it was actually working.  Mostly.  Usually.

After the kits came the improv.  We hacked our own creations.  The photoresistor from this kit combined with the buzzer from that old toy and a relay we found – along with a few passives scavenged from Mom’s old radio in the basement (some habits die hard, but it’s OK, she never noticed) all came together to make a “little brother alarm” that rang out whenever a younger sibling tried sneaking down the hall – unwittingly casting a shadow on our photo-proximity alarm.  A remote control car with a spare servo plus a handheld air-horn could… wait, kids sometimes read this column.  Don’t want to give any ideas.

This making phase was the purest form of pleasure for the engineering personality.  We dreamed, we created, we solved problems, and we touched and felt the results of our efforts.  We tested, tweaked, tuned, and tested again.  Sometimes it was fun to show off the results of our efforts, but mostly we didn’t care.  We were mesmerized by the miracle of our own ability to make things.

Next came engineering school.  It sounded like paradise.  We’d learn through a fire-hose, and our abilities to create would be amplified a thousandfold.  Duct tape and paperclips would give way to oscilloscopes and edge connectors.  Hit-and-miss guesswork would yield to beautiful analytical design with swooping integral symbols and edgy epsilon-deltas.  We’d know what we were doing and we’d do what we knew.  When we got there, it felt that way too – with real-worldish projects and challenging coursework.  The career of our dreams was right around the corner.

Finally, that dream came true.  Someone offered us real-world cash to do what we loved.  We bought a new wardrobe, briefly pondered a briefcase, and showed up for our first day of our first true engineering job.  Of course, as most people reading this know, that day often marked the end of our “making” career.  We found ourselves slogging through specifications, mired in meetings, pondering PowerPoint presentations, and calculating the power consumption under min/typ/max conditions at various junction temperatures cross-correlated with a stimulus set that had been heuristically derived from sample empirical data filtered through a low-pass zzzzzzzzzz…

Wait!  What happened to making stuff?

Today, making stuff is actually alive and well.  While we are busy working in our big companies – pushing our one engineering oar through the water along with thousands of others in an effort to steer our corporate warships toward the open ocean of innovation, individual people are still designing and making things with their hands.  In fact, we are helping them to get there.  Every hacker or maker on Earth depends on the fruits of real engineering for the raw materials of their craft.  In stark contrast to the bleak picture painted by cyberpunk fantasy, the relationship between mega-corporate technology development and rogue maker mayhem is actually happily symbiotic.

For every single straight-up, marketing-requirements-driven, business-plan-based, competitively-analyzed, functionally-specified, chasm-crossing, phone-supported, UL listed, ISO-9000d, six-sigma’d, shareholder-value-improving, properly-documented project that starts on an FPGA development board, three more are kicked off by “Fred in the Shed” maker-hacker-hobbyist-entrepreneur types that are still fueled by the fire of that appliance-busting adolescent.  Without our 40nm low-leakage CMOS-based solder-balled magic, those robotic dog-walkers and autonomous GPS-guided FPV helicopter projects would literally never get off the ground.

In many cases, we are both of these at once.  Few accountants leave work for the day and go home to add some nice columns of figures in Excel spreadsheets “just for fun”.  Not many baristas bounce up early just so they can pull a few bonus espresso shots.  However, many engineers’ hobbies look a lot like what they wish their jobs could be.  We shut off the eye diagrams, slide out from behind our lab tables, pack our team status reports away in our laptop bags, and head home to hack some dev boards, write some embedded code for that open-source CNC machine, or solder a couple new linear transducers on that new RC vehicle.

No matter how hard we try, we can’t leave that kid with the 50-in-1 project kit behind.  With all the decorum of our choreographed corporate lives, the smell of solder still beckons us.  We want to hold the thing in our hands – the thing that we made.  We want to break it, fix it, improve it, and break it again – all by ourselves.  It’s what we do.  We are engineers.