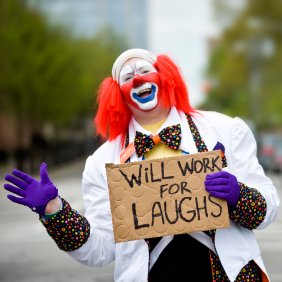 From Conductor to Semi

“So why do you think you’re right for this job?

“Well, it’s pretty much exactly what I’ve done for the last 10 years. We were almost done with something just like what you’re about to develop when the economy tanked and the project got canceled.”

“Hmmm… OK, which defrumpitation algorithm did you use?”

“Well, we started with the FTL-25 open-source algorithm…”

“… yeah, but we found that performance was horrible – it’s really inefficiently put together. We pretty much had to develop a new one from scratch. It took a lot of tries to get it just right – it’s not obvious – but we managed it. We were going to publish the results, but it all got packed up before we had a chance to.”

“I… see. OK, what about the intermuscrating feature in the Yazgul-Narni protocol? We see that as a key capability that no one is focusing on; we can make that our differentiator.”

“Oh, that feature won’t work as defined in the current spec. There are some fatal flaws in it that the committee needs to fix before it will ever be useful. That’s why no one is doing anything with it.”

“Ah… ha. Hmm… OK. Well, here’s my real question: you’ve been unemployed – we like to say “funemployed” – for, what, a year and a half now? How can you hope to be able to contribute quickly? We need someone that can hit the ground running.”

“Well, I’ve been attending the committee meetings just to keep up, I read constantly, I do practice designs in my spare time, and I have a beer with my old colleagues at least once a month, so I really haven’t fallen behind.”

“Well, so you may think, but there are people doing this kind of design right now. Why would you be better than them? I mean, when people get laid off, it’s not the best and the brightest that go, you know.”

“Normally I’d agree, but in this case, the whole division got dumped. No one was spared; there wasn’t any time for that. The investors insisted on it in exchange for a badly-needed cash infusion for the surviving part of the company. So, good and bad, everyone went.”

“Oh, come on, no reasonable company would simply throw away good people. So your company can’t have been well managed. Which makes your experience there of less value.”

“Well, let’s look at it this way: from our discussion here, I can tell that I have experience that could benefit your team, so I can definitely jump-start your project and save you a ton of time because you won’t have to relearn the lessons I’ve already learned.”

“Well, you’ll have to pay a lot more to get someone out of another company.”

“Oh, don’t go there. If I’m looking to save money, I’m going overseas. And, frankly, if hiring someone from another company means not losing my own job, that’s worth paying extra for.”

This is the time of year when we typically look back at the prior year to take stock of what happened. And, while there are plenty of things that happened, the year has been pervaded with  a “walking softly” quality. That’s because, at least from a US standpoint, the economy has loomed in the background like the overseer whose whip could come cracking down at any moment.

Of course, when we say “the economy,” we really mean only one thing here: jobs. After all, profits are up, sales are showing signs of recovery (FPGAs went crazy), stock prices are up, and bonuses are streaking back up to the unconscionable levels in the hallowed halls that nearly destroyed the hallowed halls. But when it comes to jobs, mostly the one you hear about starts with “Steve.”

In the early 2000s, after one of the convulsions associated with the dot-com bust, I recall a friend waving away the concerns about the number of people laid off. “They should never have had those jobs in the first place.”

This sounded rather callous from a micro-economic viewpoint – wait, no, it was callous. But from a macro standpoint, where all the individual people just look like little ants, he was right: there had been a hiring bubble that had to be rationalized. Had there been no bubble, those people just laid off wouldn’t have been hired. (OK, it’s hard to say they’re exactly the same people – funny how sometimes the cheap new guy stays on but the old-timer whose profit sharing is about to vest seems the better layoff – but when everyone looks like an ant and you squint, the argument works.)

This last time it wasn’t a tech bubble that burst; it was a money bubble. As in, a lot of money turned out not to exist and went . So we’ve got this huge pool of unemployed engineering talent – especially in Silicon Valley – just waiting for things to turn around.

OK, actually, if they’ve stopped looking for work, they’re technically not unemployed anymore. Part of our perverse statistics: “not employed” isn’t the same as “unemployed”… Webster would not be amused…

So let me rephrase: there’s a huge pool of engineering talent currently not employed that lies at the ready for when companies start hiring again.

But guess what: if the scuttlebutt is true, then, over the last year, companies have started hiring again. Oh, you didn’t get the memo? Then you must not be working. Because it’s like the old days: poaching activity is reported to be way up.

Now, poaching is usually associated with boom times, when there just aren’t enough trained bodies to fill all the open spots. During such heady days, engineers in the various Silicon s were like the electrons in a metal: there was a sea of them and they moved all around easily and you couldn’t really count them.

2010 seems like the year when these places changed from conductors into semiconductors (with an insulator phase in between). Now, in order to fill a hole, you have to create a hole somewhere else. There are a limited number of electrons moving around, with some regions being more depleted than others. Only electrons comfortably nestled into an interstice get to move.

So the big question for 2011 becomes, if this is what the nature of hiring is going to be, what becomes of the pool of talent that fell afoul of a disaster not of their doing?

Oh, and we’ll be adding to that pool: we repeatedly hear from the captains of industry that we’re not training up enough engineering talent – forcing them to look overseas. OK, so let’s say we train up more talent. We’ve already got an engineering over-supply – what will we do with the additional engineers?

This is, of course, a very US-centric concern; it’s particularly relevant to areas like Silicon Valley, where high-paying jobs drove up the cost of living, and where high-paying jobs are now required to meet the cost of living. If you’re in a part of the world that is both training up good engineering talent and not yet expensive, 2010 probably looked pretty good, and 2011 will presumably continue to look pretty good. Your area will be highly metallic, even gold and silver.

That is, until someplace else looks cheaper. At which point, even silver can tarnish and, through the alchemy of analogy, be transformed into silicon. From a global perspective, this is how markets should work. From a local and an individual standpoint, it can be a petrifying prospect.